The Glory and Chaos of the Eddie Aikau Invitational in Photos 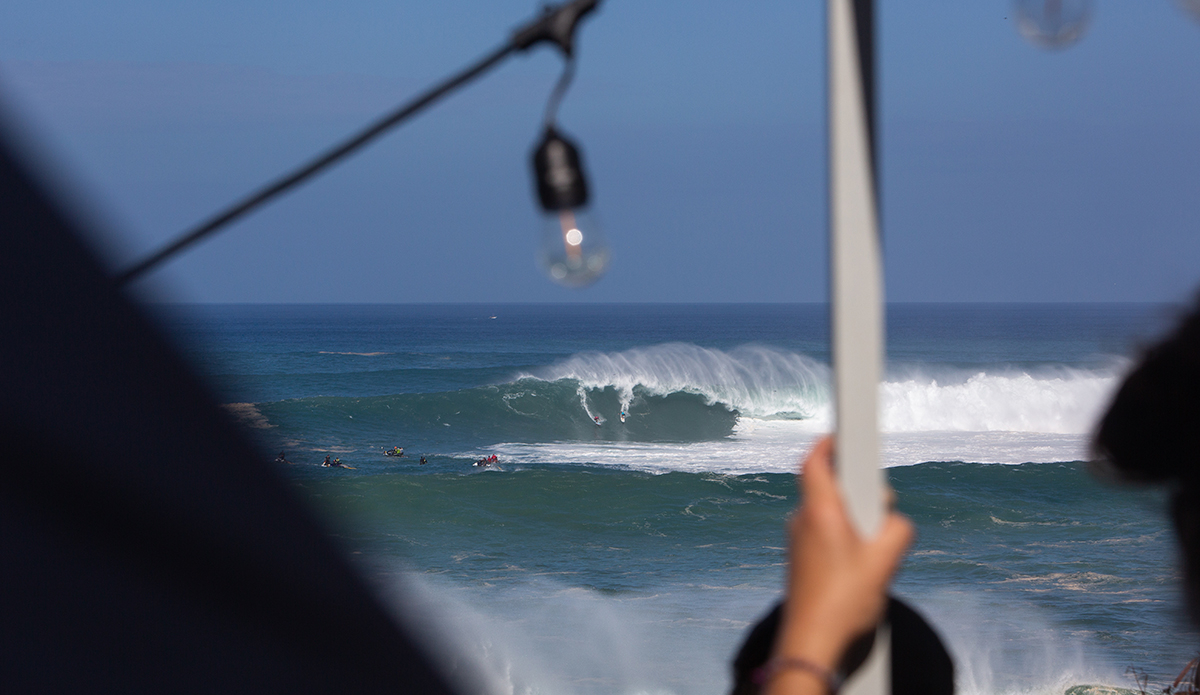 The view from the cheap seats certainly wasn't bad. 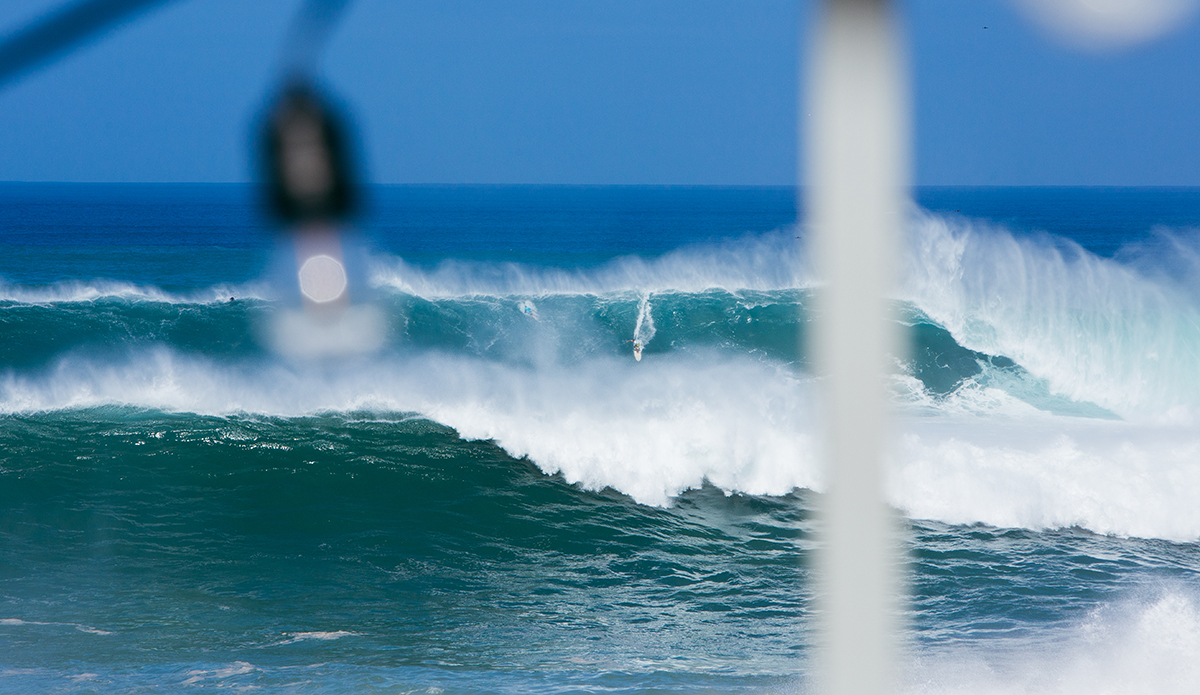 The waves were definitely Eddie worthy on Sunday..... 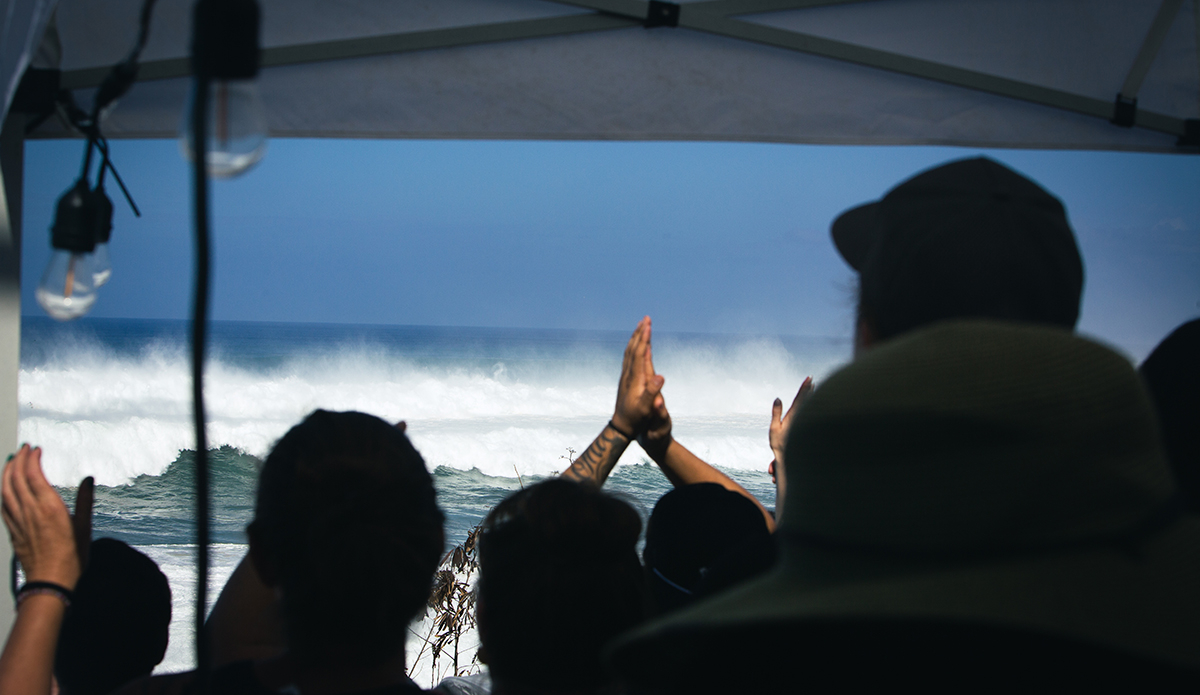 ...and the crowd agreed. 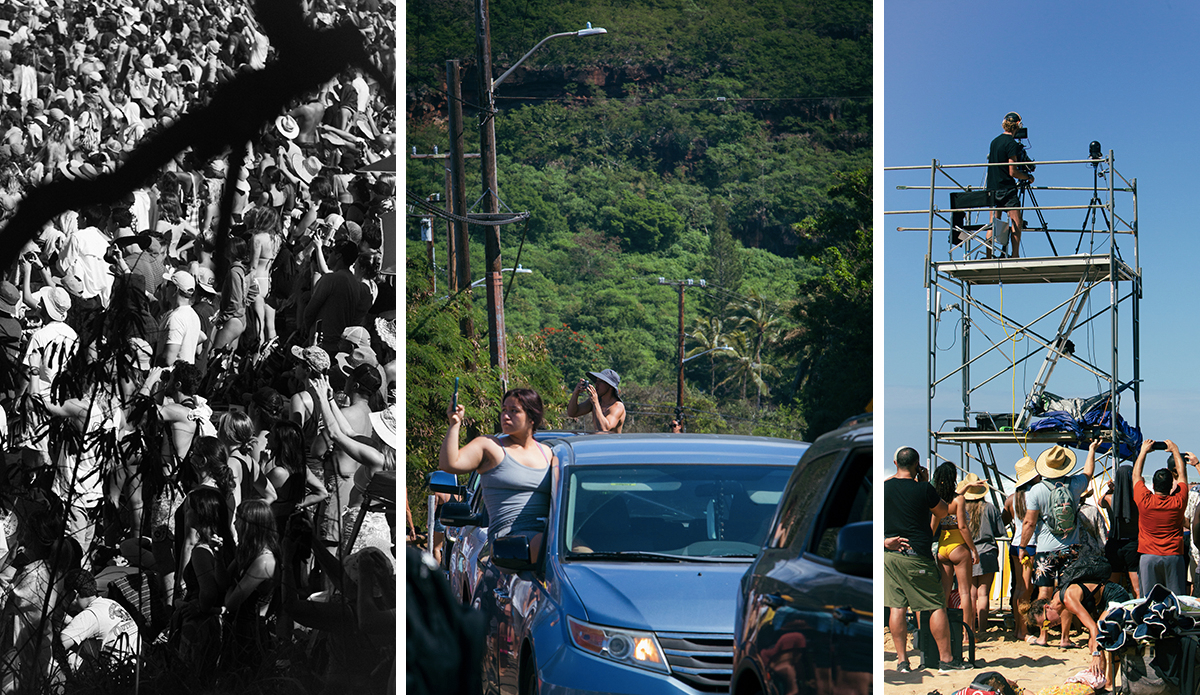 Scenes from the beach and crowded Kam highway... 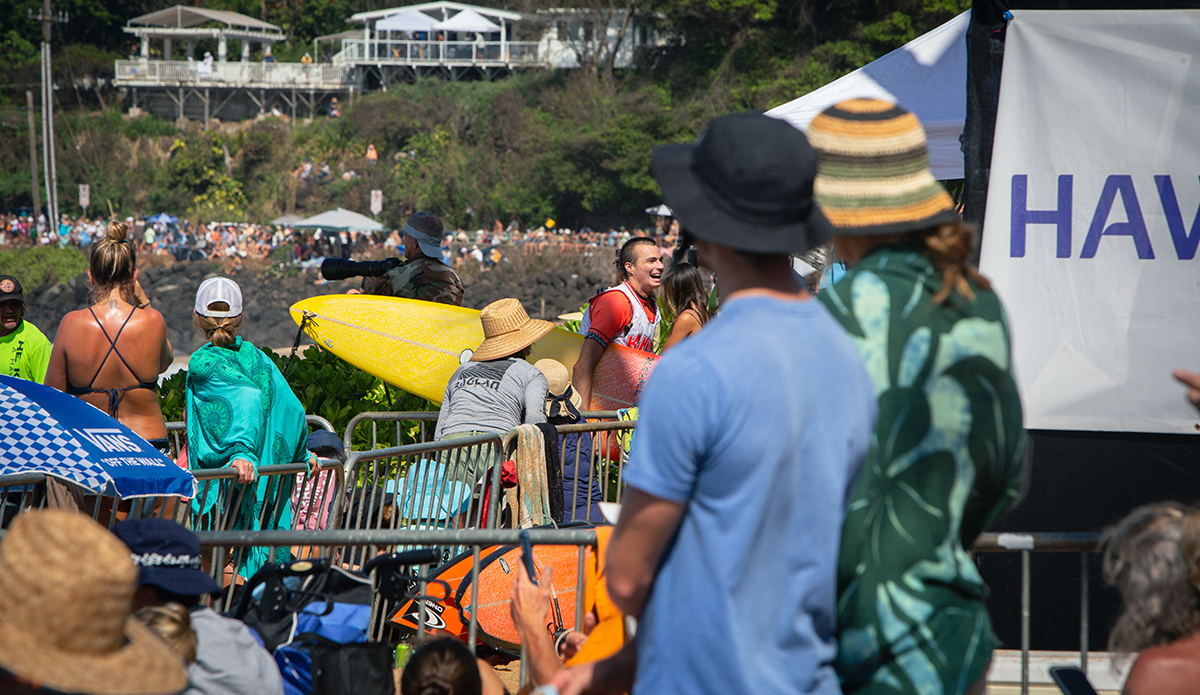 What it felt like just to be part of this historic event. 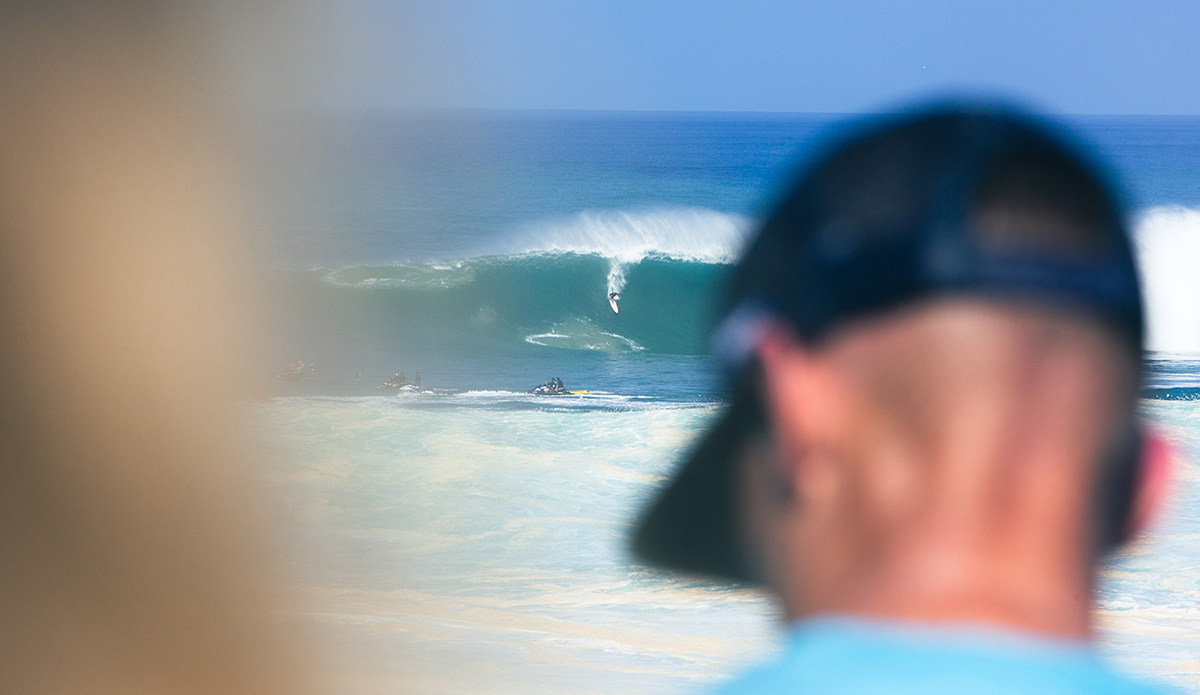 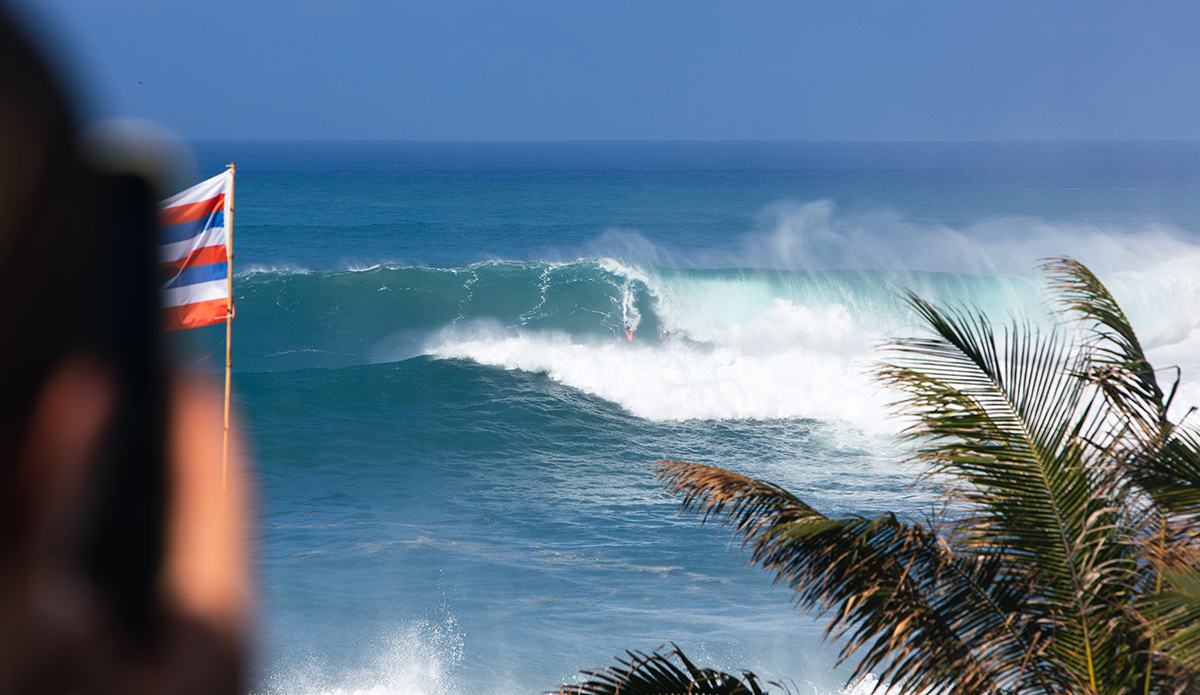 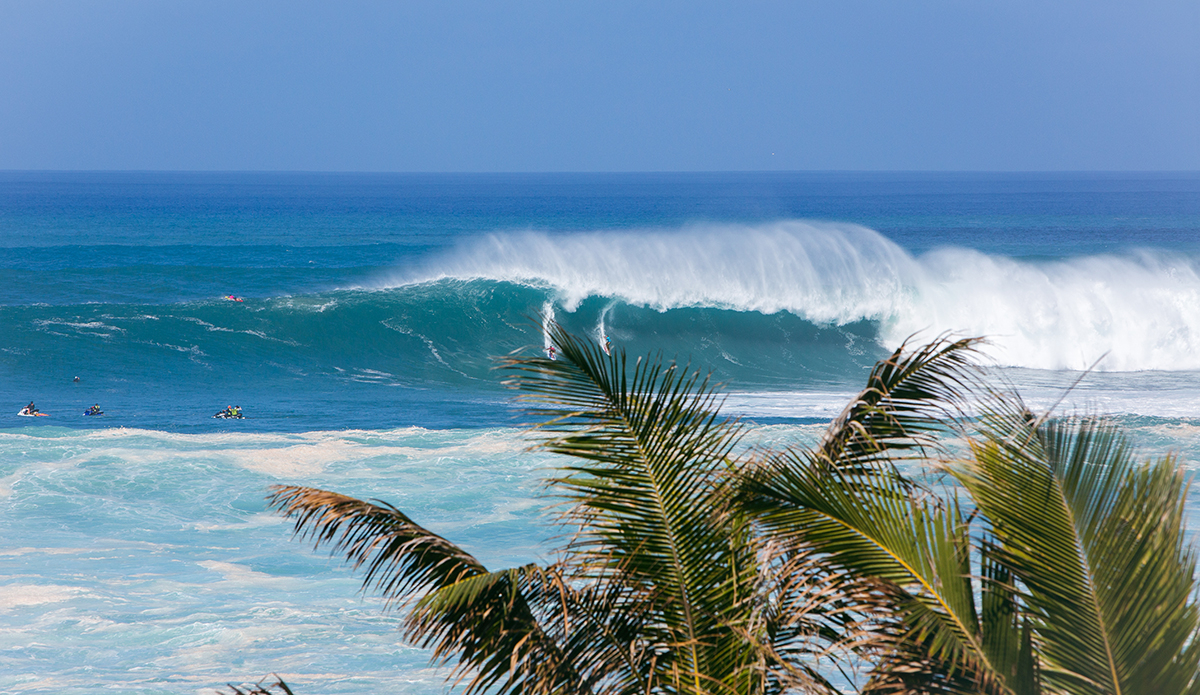 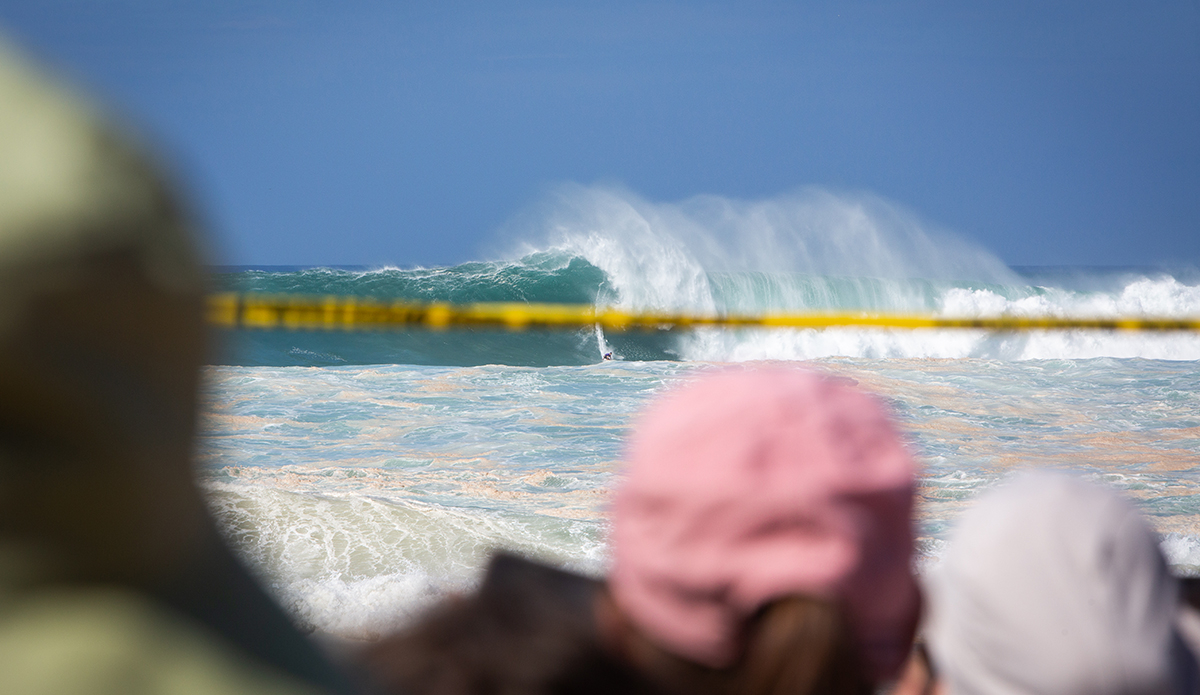 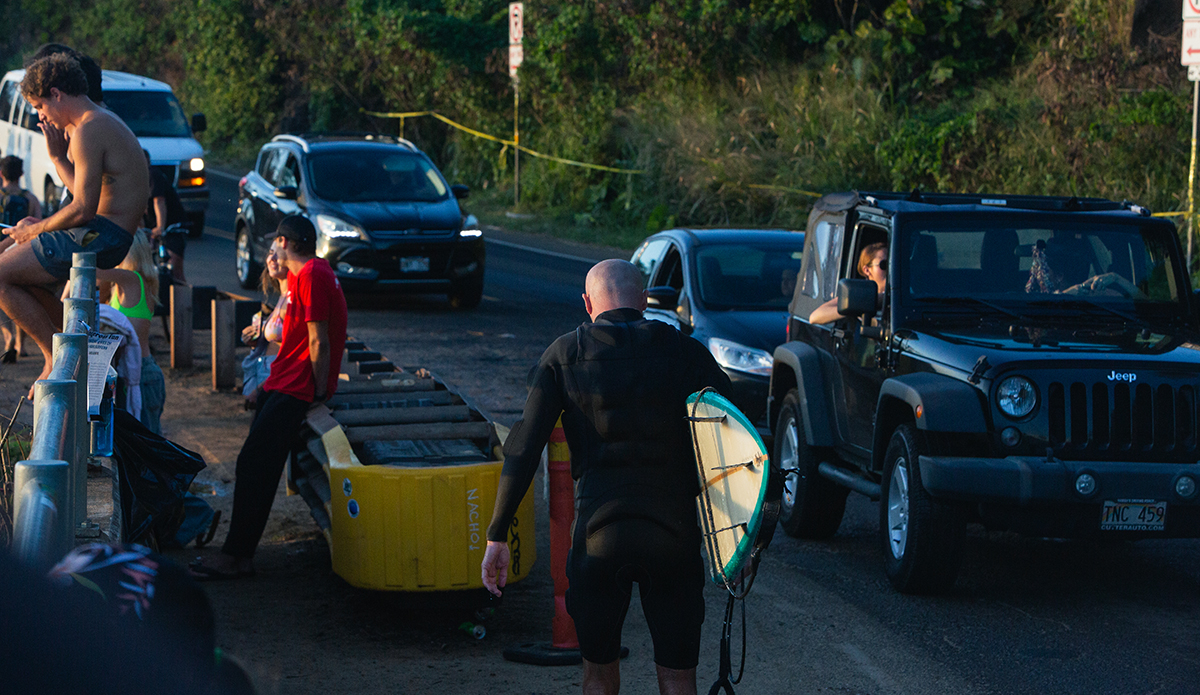 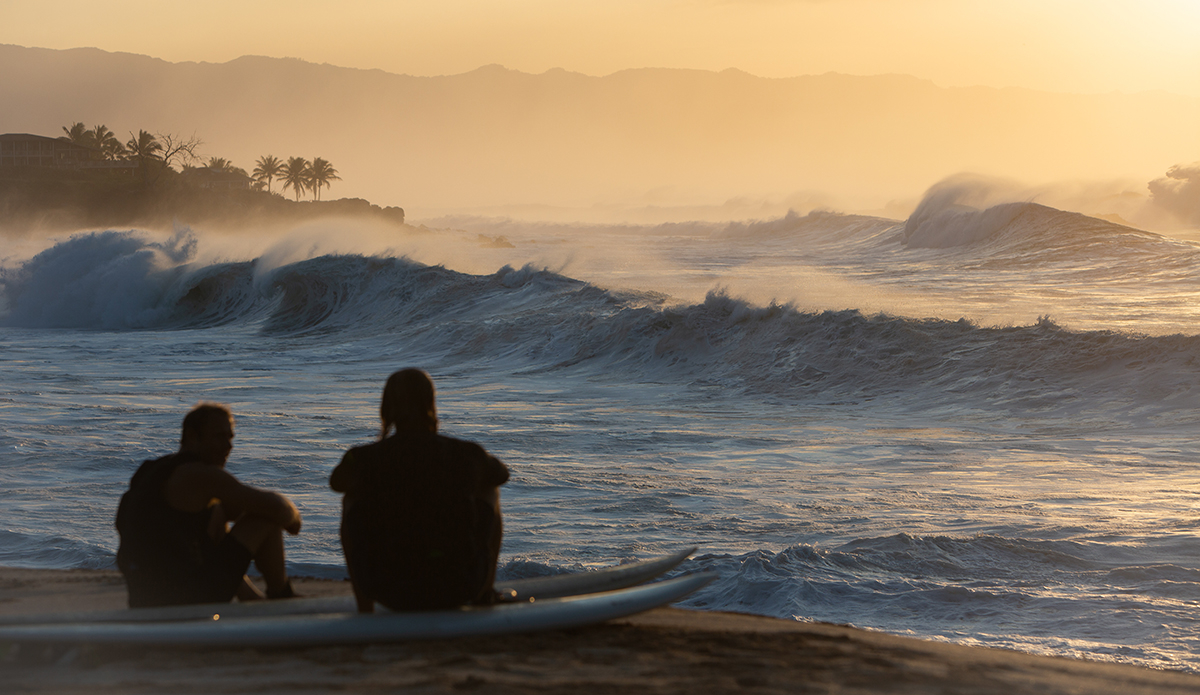 The end of the day was for everyone who'd spent hours watching. 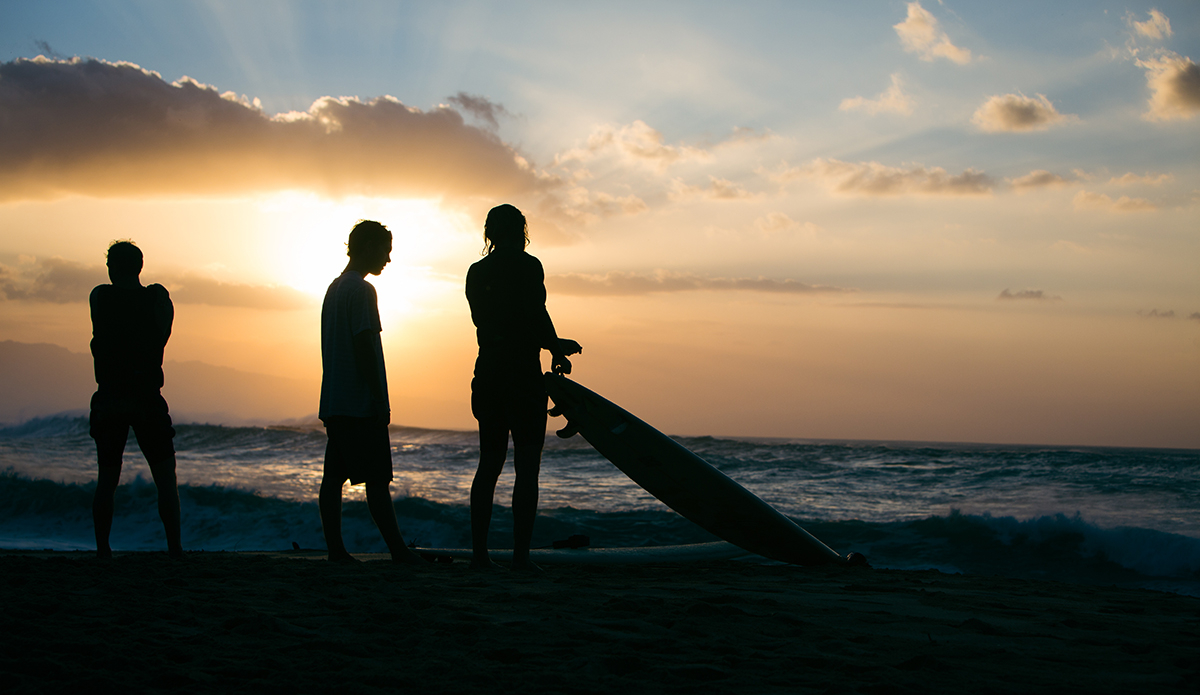 The Eddie Aikau Big Wave Invitational may have been the most highly anticipated– and attended – surf event on the North Shore this winter. Tents began cropping up on the cliffs days before the event, and by the night of the 22nd, there was music playing from just about every nook and cranny near Waimea Bay. The onlookers were ready to watch surfers charge, but they were also ready to party.

Those from other sides of the island, especially the South Shore, caravanned up in the wee hours of the night. Instagram stories of people from town showed timestamps of treks starting at two and three in the morning. The backs of pickups were crammed full of hopeful Eddie attendees, and the highways were predictably awful. Perhaps the most anticipated event of the day was the traffic, which, due to being in a constant gridlock, did not disappoint. The 60 Bus even had extra busses only for Waimea Bay. Many people were told they couldn’t even make it on the bus due to people being packed in, and some people were told they couldn’t get on because the bus wasn’t running the regular route — to the Eddie only.

Getting anywhere close to Waimea was a feat in and of itself. Everyone who surfed or had the day off was there. Parking signs read $50, and even Foodland got in on the action. Driving into the parking lot meant talking to not one, but two, security guards interrogating your intentions for parking in their parking lot. “For shopping only, it’s not beach parking!” But that day, everywhere turned into beach parking somehow.

Once you were close, you could feel the energy. Waves pummeled the rocky cliffs and thousands of camera people all pointed their lenses to the massive faces. The commentators were riled up, the surfers were amped, and the show was on. The tent city was almost Coachella-esque: DJs played perfectly curated sets while the dancers cheered every time a surfer dropped in. When a cleanup set rolled through (and there were a couple!) people went mad. The excitement was tangible, and it was a party in all directions.

Down on the beach, the crowd was so thick it took almost an hour to make it from one side to the other. Carefully stepping through families, gatherings of high school friends, people passed out in the sand, and surfers with binoculars, it truly felt as if everyone came together to witness history. The commentators interviewed the surfers after they came in from their heats, and everyone was stoked. One particularly great moment: right after public address heads profusely thanked attendees for coming out to support the Eddie Aikau Invitational, a huge set rolled through and the phrase ”BIG BILLY KEMPER” was screamed by someone in the crowd. Everyone cheered.

People standing too close to shore got a nasty surprise when the waves piled up and water washed their belongings out to sea. But the lifeguards warned them! This hardly even dampened spirits as the surfers were on fire.

Mark Healey caught bomb after bomb. People were on the edges of their seats — and towels — as the surfers took beatings and the skis zipped in front of massive waves to get people to safety. While it was difficult to see the surfers themselves because the waves were breaking so far out, the brightly colored guns indicated who was up and riding. The crowd went wild when Nathan Fletcher, John John Florence, Kai Lenny, Zeke Lau, and, don’t forget the wahines, Emily Erickson, charged alongside Keala Kennelly, and the stoke was real to see women throwing it down out there!

When Luke Shepardson won, it was like a bomb went off. With an insane score of 89 points (out of a potential 90) the crowd went absolutely berserk. Everyone was over the moon that a Hawaiian lifeguard took out the most important surf contests of the decade. And, of course, the runners up were stoked, too. John John Florence ended second, Mark Healey third, and Billy Kemper was right behind them.

After the raucous celebration and awards ceremony commenced, the peaceful atmosphere at Waimea Bay resumed and North Shore residents ambled down to the shoreline to catch one before dark. Traffic eased, and as night fell, surfers and Eddie attendees alike basked in the beautiful sunset, feeling grateful to have been a part of surf history.