The Perfect Chapter at Carcavelos: A Guide to One of Portugal’s Finest Waves and the Event You Won’t Want to Miss 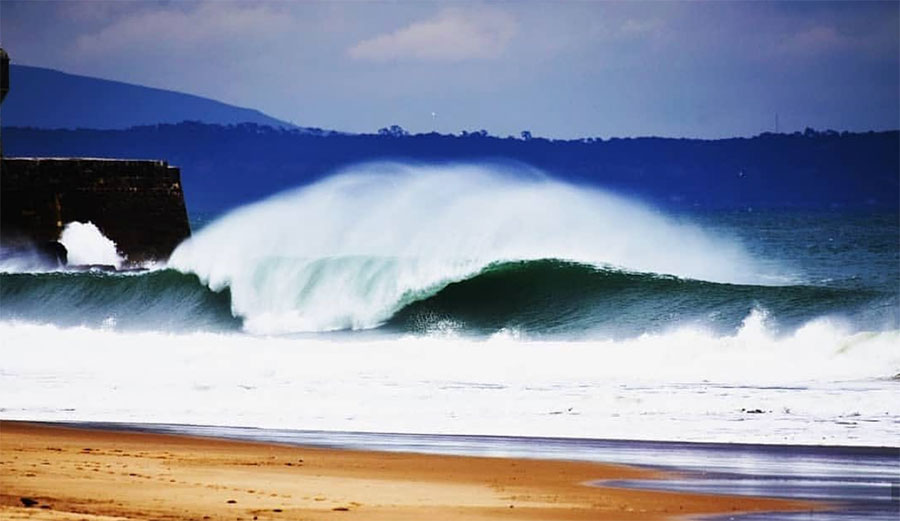 Carcavelos. When it’s on, it’s really on. Photo: capitulo_perfeito/Andre Pinto

There’s something magical about scoring a fickle spot. You know the ones. Once, long ago, you surfed some of the best waves of your life there. It’s never been as good since, but every time a similar swell lands on the forecast, you begin to feel that little flutter of hope. That’s what the Perfect Chapter waits for: that perfect day. And this year, it’s at Carcavelos, a fickle spot that gets really, really good.

“The wave is similar to Supertubos,” Rui Costa, the organizer of the event, explained. “It’s a heavy, barreling beach break.”

Situated just under 10 miles from Lisbon, Carcavelos is a charming little place with everything that makes life good. Great wine, great food, and some of the best surf in a surf-rich country.

“The wave is really good when it works,” Nic von Rupp told me. “It’s twenty minutes from Lisbon. There’s local support from Lisbon, and the Perfect Chapter is all about great waves. Carcavelos has that — on its day, it’s fucking insane. You have to be on it in terms of forecasting, though. It’s a tough one. It’s an amazing beach break, but it’s not an everyday thing.”

Capitulo Perfeito is an interesting event. The surfers are picked through a fan voting system, so you know the fan favorites are going to be there. When the Perfect Chapter first ran in 2012, it was a local contest. But in the years since, it’s been opened up to international surfers. This year, Clay Marzo, Bruno Santos, Pedro Scooby, Balaram Stack, and more join the Portuguese surfers. And much like the Eddie, the contest runs if the waves are outstandingly good.

“We have a commitment to the fans where we only give the go-ahead for the contest when we can guarantee a proper show,” said Costa. “We have the best tube riders in the world in the Perfect Chapter, guys who can go out and get 10-point rides in conditions that are practically impossible for the average surfer, so we’ll wait for a day that can put them to the test.”

There is a chance that the event will run soon. The waiting period was recently extended to March 15, and organizers are eyeing an enormous swell tracking towards Portugal’s coast. With any luck, it will land early next week.

“It looks big. It looks nice. I don’t know, though,” Nic said. “I’d like to see it a little more offshore; more north wind. It’s dead winds at the moment. You want it to be a really big north swell or you just want it super west. It needs to be huge everywhere else for it to be good… it needs to be huge, for sure. It’s pretty big, so it could be working.”

The event runs in different places, depending on the year.

“They’ve had it at Supertubes, they’ve had it at Nazaré,” Nic said. “Nazaré is actually a really good beach break when it’s smaller. We had it pretty good before at Carcavelos. Like, firing for the Perfect Chapter. I mean, you’ve seen the footage right? It’s fucking insane.”

When I asked Nic where his preferred location was, he had a hard time answering — which makes sense, since the event is centered around the best possible waves at any one of the spots.

“I’d say between Carcavelos and Supertubes,” he finally decided. “Supertubes is just more consistent. Carcavelos can be hit or miss… it’s a lot more tucked in.”

“They come to us for advice sometimes,” Nic said when I asked him how much say the surfers have. “Especially guys that have been chasing swells for a bit. Rui always asks for advice, but I just give my opinion. Leave it to the scientists. I try not to be too loud of a voice because calling an event like this wrong can be a big shot in the leg, you know what I mean?”

So with an eye on the forecast and a whole lot of hope, everyone involved has their fingers crossed that a perfect swell will fill in for the Perfect Chapter. And Nic, for his part, isn’t doubting it for a second.

Keep an eye out for the call, because the window for the event closes on March 15. Keep up to date on Instagram and on the website.