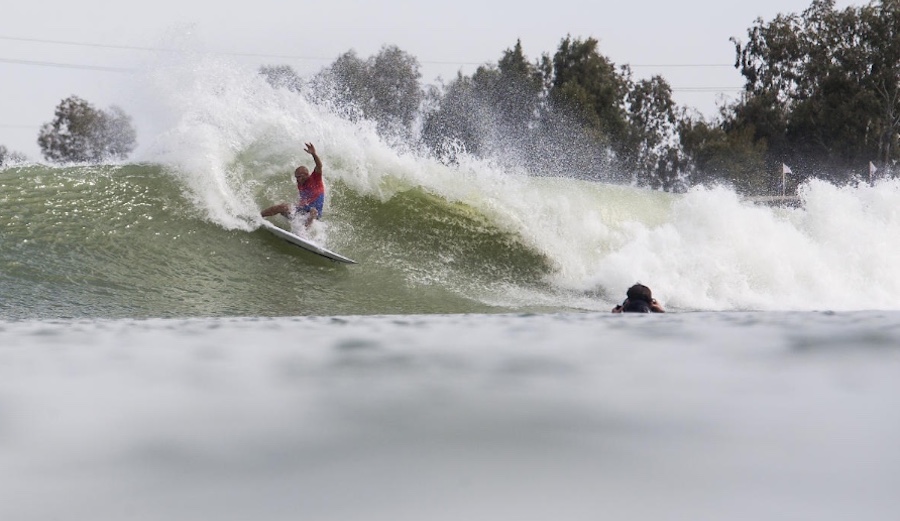 Don’t sleep on Kelly Slater to win this thing and in an emotional acceptance speech announce his retirement. Photo: Rowland/WSL

We’re officially just hours away from the World Surf League’s latest experiment: can the world’s first Championship Tour event in Lemoore drum up the same level of excitement as contests in the ocean? Depending on your proclivities, you may view the event as surfing’s soul escaping the body, or maybe you’re ecstatic to see the best surfers in the world duke it out in the tub? Maybe you fall somewhere in between. Whatever the case, the fact of the matter is the World Surf League will make history this weekend in Lemoore, which has already garnered the attention of many a mainstream outlet.

For the dedicated surf fan, though, there’s a twist. As it happens, priority rules, jockeying for position, and sneaking waves under someone’s nose need not apply when the same wave pops up at predictable intervals. As such, at the Surf Ranch Pro the WSL will unveil a brand new format – not head-to-head heats, but “runs” as in skateboarding or snowboarding.

It goes like this: each of the 32 men and 18 women will surf three runs, each run consisting of two waves (a right and a left) over the course of Thursday, Friday, and Saturday. Each surfer keeps their highest scoring right and left, which gives them a total score. Before Day 3, though, surfers are re-seeded according to their totals in reverse order – lowest combined totals going first, highest going last. After Run 3, the top eight men and top four women with the highest combined totals move on to the finals.

Each surfer that makes it to the finals will get another three runs (again, one right and one left each), and the surfer with the highest total score (again, best left and right combined) will be crowned champ. No info on the WSL’s website about what happens in the case of a tie. 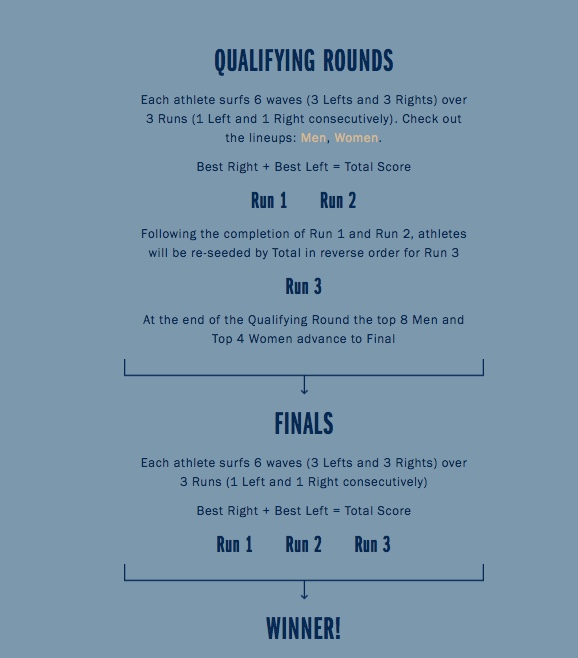 Here’s a helpful breakdown of the format. Photo: WSL

The road to a win at the Surf Ranch Pro is made up of twelve waves, and the top four count. In other words, an excellent score on two out of every six waves is enough to catapult someone to the podium. Time will tell if the format is enough to encourage athletes to go big, or if it’ll simply reward safety surfing – the major sticking point of the Founders’ Cup.

And despite a nagging injury to his hoof, Kelly Slater has confirmed he will compete. Don’t put it past the 46-year-old to win the whole thing and under the unrelenting Lemoore sun and use the win as an opportunity to announce his retirement at the end of the year. Just a prediction, but you heard it here first.