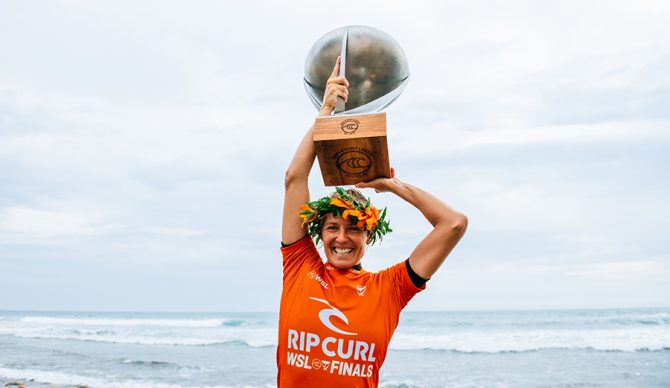 She earned it. And we forgot about her. Photo: Thiago Diz//World Surf League

“Some are born great, some achieve greatness, and some have greatness thrust upon them,” wrote bad boy Billy Shakespeare. Or in Stephanie Gilmore’s case, some quietly achieve GOAT status whilst no one is watching. Perhaps of the most remarkable aspects of Gilmore’s eighth world title was that no one had given her a chance of making history.

In a massive fail in surfing groupthink, it’s hard, in hindsight, to justify how most surf fans, and so-called experts, underestimated and ignored the greatest female surfer of all time. How did a seven-time world champion, one of the most stylish humans to ever ride a surfboard, and with a competitive track record only bettered by Kelly Slater, get written off before the WSL Finals?

It was an incredible lack of foresight, matched only by a dearth of respect of which I was very much a part of. And yes, I can pathetically list all my reasons for writing off Gilmore. After all, she had to surf six, maybe seven, heats at Trestles, the last two or three against Carissa Moore, by far the best surfer of the last five years. The WSL Finals format was set up to reward performances throughout the calendar year, and Gilmore had been handed a severe handicap based on a largely mundane 2022.

Having missed Pipeline due to COVID, in the next five events she managed just a single semifinal. Early on there was talk not of world titles and impending greatness, but of relegation and retirement under the brutal new cut system. After Margaret River, Gilmore snuck in as the sixth surfer of the 10, keeping her name in the race, even if she was far back in the field, and boxed in against the rails.

A win at El Salvador was the first sign that she had the competitive desire to rattle Moore’s cage. Yet even that was a brief flare that dulled quickly. She limped into the WSL Finals berth with a ninth in Brazil, a third at J-Bay, and a fifth in Tahiti. Her average heat total for the year was below 11.00 and she trailed Moore by 10,000 rating points at the end. 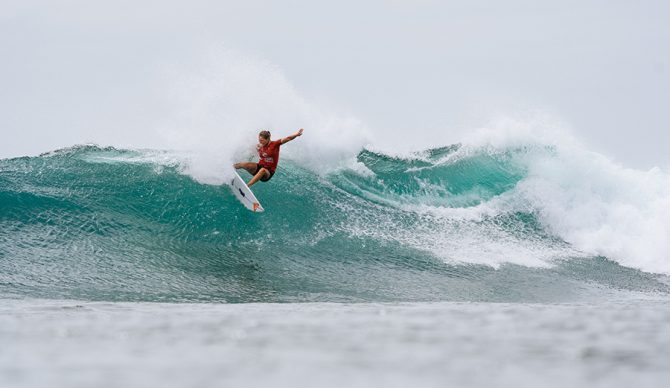 Yet, as they say, form is temporary and class is permanent. However, Gilmore went to Trestles aged 34. Class can get old too. She had last truly dominated the sport in 2010 when she claimed her fourth successive title. Her sixth world title was won in 2014, and in the intervening eight years on the CT, she had added just one to equal Layne Beachley’s record. The world title tap that once burst with her relentless energy, style, and charisma, had dwindled to a slow drip of periodic standout performances only when the location, waves, and her mindset aligned.

And we, the ungrateful idiots, lapped all this up. The surf world had moved on, and we stupidly believed one of the greatest surfers of all time was just making up the numbers. Going into Trestles it seemed that even if she could beat Hennessy, Defay, and Weston-Webb, that would just lead to Moore. It seemed impossible that a fresh, dominant defending world champion, surfing as well as at any stage in her career, could be defeated by anyone, let alone a fatigued Gilmore in three-foot onshore Trestles.

We also remembered last year, when she was on the same stage, on the cusp of the same greatness, and had buckled in the first matchup. This year, in the first 20 minutes against Hennessy, history seemed to repeat itself. The same simple mistakes, the same nerves. Oh Steph, it was painful to watch but strangely reassuring. We called this. We know our shit.

But we didn’t know shit. We didn’t know how hard she had been training. We didn’t even think to think that it was this type of thinking that had made her incredibly angry and determined. We didn’t know she had new fins in her DHD that were clustered tighter and that gave her more speed, control, and release. We didn’t understand how much this meant to her. In effect, we failed to remember all the reasons that made her great in the first place. The talent, the drive, the competitive desire, the style and the will to win were all still there. We’d just ignored them.

It was Ralph Waldo Emerson who said that “to be yourself in a world that is constantly trying to change you is the greatest accomplishment.” Over a day and six heats, Stephanie Gilmore simply did the kind of surfing that only Stephanie Gilmore can do. It earned her an eighth world title and GOAT status. We should all be sorry that we didn’t see it coming. We should all be thankful that it did.