Tyler Stanaland on ‘Selling the OC’: the Drama, the Feuds, and How the Show Has Affected His Surfing Life 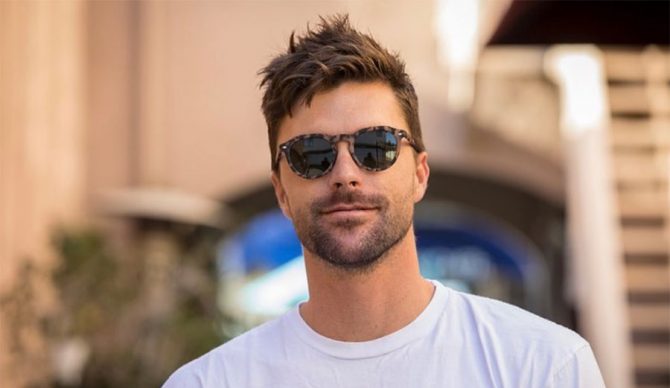 Tyler Stanaland will get super shacked at the Wedge and sell your OC house. Photo: Instagram

Recently, as is the usual for me, I flopped down on the bed. My partner was scrolling through Netflix, looking for something to watch among the countless titles and she landed on Selling the OC. Now, I’m generally not into the real estate shows that have become so popular, but my partner certainly is. I said I didn’t want to watch it, she said she did. So we compromised and watched it. And guess what? I hated how much I loved it. The drama! The obscenely nice houses! The lip filler and boob jobs and unmoving foreheads! I’m a sucker for a drama-filled reality show, and boy-oh-boy, was this ever that.

At some point, I realized that one of the show’s stars seemed vaguely familiar. A handsome, quietly confident man named Tyler. He wore Catch Surf shirts. There was a tiny snippet of him surfing a Catch Surf board in a way that proved that he actually surfed. And then, after a few episodes, I realized that Tyler was none other than Tyler Stanaland, a man who we’ve had on this little website countless times for his preternatural abilities at the Wedge. What, I thought to myself, is Tyler Stanaland doing on Selling the OC, a reality real estate show on a platform with some 220 million subscribers? He’s been around the world chasing waves and generally doing professional surfing things, so I gave him a ring to find out how it all came to be.

I didn’t even know you were a Realtor. How long have you been doing that?

I’ve been in real estate for a long time as a family trade. I’m actually fifth generation. When I was super young, real estate was always the backup plan, once I was done figuring out what I really wanted to do. I got my real estate license when I was 18, so if I didn’t find something better, that was always there.

How did you end up on Selling the OC?

I ultimately ended up back in the business working for the family, but it was just perfect timing. How the show came about, the Oppenheim Group — they have that show Selling Sunset — they were opening an office in Orange County. I was reached out to by the production team and they asked me to be a part of it. I was kind of looking for a way to venture out on my own away from the family business anyway. It ended up just being perfect timing that aligned with a brand that I thought might offer some fun opportunities. It was totally out of left field, but sometimes the best opportunities come out of left field.

Do you like being on the show or would you rather just be doing your own real estate thing without a massive audience?

The nice thing about the show is you only sell a couple of days a week when you’re filming. We filmed in blocks, and we have a bunch of time off. It’s not like you’re filming five days a week and unable to work. But, you know, I’m not necessarily center-of-attention guy. It was kind of hard getting used to having cameras around 24/7. Trying to act normal was a little bit of a struggle. It’s a strange thing. But you know, in time you end up finding your feet, and then fortunately — or maybe unfortunately — you forget that the cameras are there. So it takes some adjustment, but it’s an interesting experience, for sure.

You come across as one of the more well-adjusted people on the show; one of the more comfortable, natural characters who doesn’t necessarily want to be in the center of a bunch of drama.

Is all the drama on the show actually real? I always wonder if those things are partially scripted.

You know, we filmed for four months, and then four months where the filming gets squished into four hours. In the end, you’re left with just bits and pieces. Without context, there’s so much that can be misinterpreted or assumed. It’s interesting to watch it back; seeing the story that ended up unfolding based on snippets of what we filmed. I just did my best to be who I am. I think maybe other people kind of leaned into certain character traits that they thought might be entertaining, but there are no lines. It’s not scripted or anything like that. The drama these people bring to the table is drama that maybe they felt needed to be shared. For the most part, the real estate transactions are actual deals as well.

Were you worried about a production company dictating how you came across to the masses?

You just have to do your best to be the most authentic version of yourself. Then whatever happens, you can say you weren’t pretending to be a character or something, you know? That was my theory, going into it. I’d rather just be myself.

You were already pretty well-known in your zone, but has being on a massive Netflix show affected your daily life at all?

I haven’t felt like that, no. I mean, I think maybe a couple more people would recognize me in places outside of surf, but it hasn’t changed my life. Life is definitely busier, though. I mean, it’s benefited my business in a lot of ways and brought me other new cool opportunities. But I don’t think that life has changed too dramatically, which is good.

Yeah, I guess being a Realtor depends a lot on people knowing you’re a Realtor. Being on a show like Selling the OC has to help a lot.

That was a big part of the reason why I want to do it. You know, as like a prideful young man, I wanted to carve out my own niche from the family business a bit. Just to kind of get out of the family shadow, you know? The show on Netflix was a platform that would be hard to pass up on as a Realtor. That sort of reach and exposure is something that money can’t really buy. It was kind of a no-brainer in that sense, for sure.

You’re still heavily involved with Catch Surf, right? Did you ever feel the need to throw a plug in here and there for them?

It’s pretty real estate focused and we don’t really show me surfing or anything like that. But maybe that’s something that they would show more if there was more seasons. This time around, we only got eight episodes and there’s only so much we can fit in. There were so many other storylines that those kind of took precedence.

I’m obviously biased because I surf, but after I realized it was you on the show, I feel like more footage of you surfing could have been such a cool storyline.

Well, we filmed in December, January, and February, and it was freezing. It was the worst winter ever here in California, so we really didn’t have the opportunity to.

What are your plans moving forward? Could you see the show being a springboard for something else in show business? I’m the weirdest human on Earth when a camera is pointed at me, and you just seemed super comfortable.

No, I feel the exact same way you do. When the camera is pointing at me, I turn into like, just some weird creature. I don’t know… I don’t have any specific plans. My ultimate focus was really just to grow my real estate business and see what other opportunities come up from it. So that’s kind of my main focus right now is grow that business and still have enough time to do some fun surf trips and things like that. If something else comes my way that makes sense, I’d love to take part but right now, I’m just focusing on real estate.