‘The Ultimate Surfer’ Is Brilliant; Here Are 6 Reasons Why 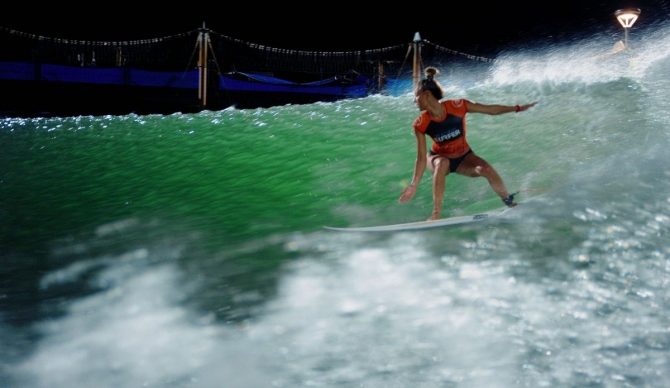 Tia Blanco battles for $100,000 and three wildcards to compete on the Championship Tour during ABC’s The Ultimate Surfer. Photo: ABC

Like many surfers, I understand the instinctive gag reflex that accompanies any cellophane-wrapped packaging and distribution of surfing for profit or entertainment. For better or worse, surfing is my business (and love), so my perspective on the matter is as warped as it is sharp.

It’s a fine line. I understand the sacrilege of its bastardization. I also understand that its virgin days ended long ago – an era before John Severson put The Surfer Quarterly into circulation to simultaneously nurture (and profit from) its intoxicating culture. I also understand that every human’s personal experience with surfing and the ocean is what they decide it is. Blaming commercial surf exercises for my own misadventures is largely a red herring because two basic principles remain true: Surfing is fun, and populations (typically) increase. So, like it or not, as time passes, more humans will surf. Beyond that, I believe that surfing offers a rich addition to our lives on Earth. While I want empty barrels as much as the next guy, there’s a strong case to be made that the more ocean lovers on our blue planet, the better off we’ll be.

With that preamble, I wasn’t entirely sure what to expect of The Ultimate Surfer, surfing’s first prime-time major network reality television show. I’ll admit that my wife converted me into a blue-blooded reality television watcher a few years ago. At first, I was a reluctant spectator. Then I embraced it as a delicious, guilty pleasure. I eagerly anticipated surfing’s treatment via ABC, and after watching the first two episodes, I’m all in. The Ultimate Surfer is brilliant. And my appreciation for the endeavor multiplies when I consider its impact from a strategic business perspective. Here’s why.

1. The Ultimate Surfer is essentially about people (and their inevitable drama), not surfing. Drama is universal. Surfing is less so. It’s no secret that humans like to watch drama, sport, and high-pressure situations. The reality show format folds them into a tidy little feast in the form of 44 minutes with a few commercial slots. Those ingredients can be more challenging to locate over the course of a multi-day, multi-hour surf contest. So, for a sport that is notoriously challenging to package for entertainment, voila, surfing is instantly compelling. Mission accomplished.

2. Surfing can be hard to understand. The Ultimate Surfer is a great teacher. For a sport poorly understood by the masses and a league with a directive for audience growth, it’s the perfect tool for education and inclusion. In just two episodes, the audience has grown more familiar with the nuances of backside surfing and combo turns. By chunking concepts into digestible lessons buried in catty drama, the WSL is educating a brand new audience. Smart.

3. The cast provides a reason to care about pro surfing. Whatever proportion of net new converted surf fans looks like, I guarantee they will be more invested in the cast of The Ultimate Surfer than any surfer on the tour. Why? Because they know their backstory and personality. They’ve watched them struggle to achieve their goal, so they’ve got a dog in the race. The WSL is clearly aware of the power of character development; the more they’re able to apply this formula to athletes on tour, the more compelling the tour will be.

4. The participants are largely great ambassadors for the sport. The cast is composed of good people. Episodes have yet to go full reality show with producers casting a heartless villain. They seem to be flirting with the concept with Anastasia Ashley’s portrayal, but, on the whole, each cast member is dynamic and solid, and I suspect it was important to the WSL to showcase good people.

5. Strategically, it’s a brilliant project for the WSL. It’s essentially a gigantic commercial for professional surfing, the Surf Ranch, (and Billy Kemper’s documentary) – a bunch of properties the WSL owns. So…the WSL got paid a meaningful chunk of money to advertise to audiences they’re dying to reach. Have you ever been paid to advertise your new products? That’s some Jedi business acumen and something only a well-versed entertainment executive like Erik Logan could accomplish. While the battle for ratings will be cutthroat, WSL management has to give leadership a pat on the back. Well done.

6. The show is entertaining. It’s shot and edited skillfully. I want to see how the catty spats resolve. I like watching the micro-surf competitions. I want to know who wins, and I’m curious to see how they’ll fare in their wildcard events. For what it’s worth, my money’s on Tia Blanco and Koa Smith, and I’m excited to tune in next week. Hopefully, the show will continue to impress. It’s apparent that the team behind it put a lot of thought into its execution, and while the surf tribe is full of curmudgeonly guardians, a sincere compliment on an ambitious vision is in order.

Watch The Ultimate Surfer Monday and Tuesday nights, and learn more on WorldSurfLeague.com.