Understanding Freediving Blackouts and How to Prevent Them 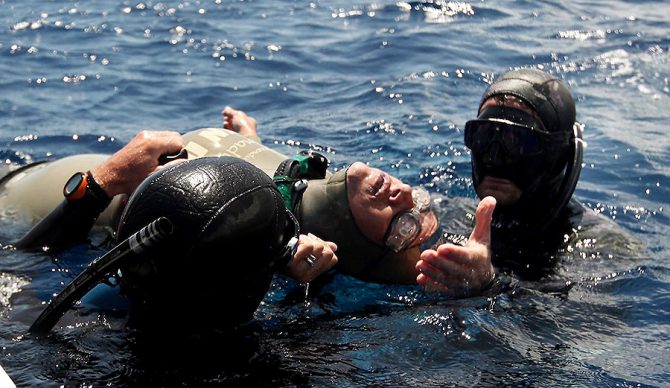 People that have survived freediving blackouts report a euphoric feeling having come over them full of bright lights and even music before darkness consumed them. Freediver and big wave surfer Patrick Curry describes his blackout experience as such: “When I got a few meters from the surface, I entered a dream. I didn’t feel any pain or slow loss of vision, I was just there in the dream. It felt great. I felt calm and weightless; totally detached from any stress. I was in darkness, but at the same time, I was experiencing bright colors. I was seeing an incredible light show. A laser lights show with fireworks, but exponentially better. There were also beautiful noises. I think they were musical but even if they weren’t, they felt right. The whole experience was very pleasing. I knew and felt true euphoria.”

A beloved friend and community member on Maui, Geoff Hunter, recently lost his life from a deep water blackout after catching a highly prized Giant Trevally at 120 feet. His death shocked the community. As a consequence of Geoff’s passing, Freedive Hawaii’s Benjamin Zyons and Hawaiian spearfishing legend Brad Kepoo will be putting on a series of donation based clinics during July on Maui, focusing on the prevention of blackouts. “I’ve been hearing a lot of talk recently from influential members of the Hawaii Spearfishing community about safety, teamwork, and the importance of taking courses like the ones I teach here at Freedive Hawaii. They are designed to educate local divers on the importance of basic safety for Freediving and proper use of the buddy system for depth diving and spearfishing,” says Zyons.

Estimates for the prevalence of blackouts within the freediving/spearfishing community vary greatly and data are difficult to gather due to the lack of distinction between drowning and blackouts. But an average of six individuals succumb to blackouts in Hawaii annually. A combination of factors are responsible but ultimately death results from hypoxia (lack of oxygen to the brain). These are the three commonly identified types:

Characterized by a loss of consciousness as an individual nears the surface after a deep dive (>30 ft.). This is the most common among freedivers and spearfishermen/women. The main mechanism behind this blackout is the drop in partial pressure of oxygen in the lungs as the absolute pressure of the surrounding water drops nearer to the surface. The lungs expand, pulling oxygen from the blood and less oxygen is able to get to the brain, leading to syncope (fainting), eventual involuntary inhalation of water and drowning.

Static-Apnea Blackout Refers to situations where the individual does not experience a change in pressure. Voluntary and involuntary hyperventilation is the main factor attributed to this type of blackout. Hyperventilating rids the blood of carbon dioxide, leading to longer dive time but with a risk. The lack of carbon dioxide changes the pH of the blood, causing the arteries that bring blood to the brain to constrict, slowing oxygenation. Syncope comes on suddenly as the brain cannot receive the oxygen it needs.

This occurs as the diver reaches the surface and exhales, fainting before he/she can acquire enough oxygen to recover from the dive. The diver/swimmer can be at risk of syncope for up to 60 seconds after reaching the surface. 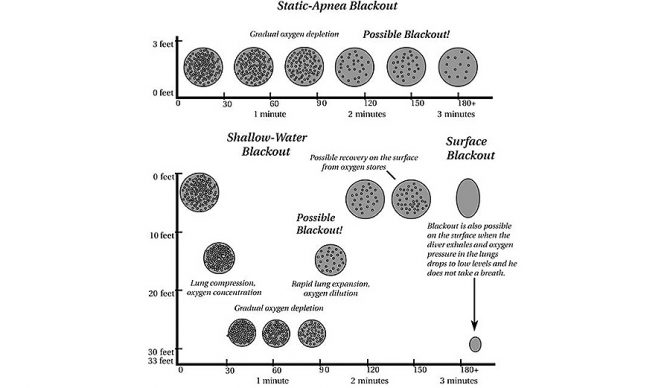 Many other factors can add to an increased risk of blacking out, including acute diet (being hungry), dehydration, hypothermia, stress, and a lack of experienced practices that can conserve energy. Not hyperventilating before dives, giving yourself sufficient recovery time between dives, eating well before diving, having a vigilant buddy system, and knowing the limits of your abilities can be crucial in preventing blackouts. There is also a Freediver’s Recovery Vest that can be calibrated to go off at a specific time and depth limits, which will bring you to the surface face up. However, if you’re seeking to become an advanced freediver/spearfisher, taking a safety course is paramount in honing your skills to prevent and handle blackouts in emergency situations. Find an experienced instructor in your area and take a course. There is no substitute for direct hands-on practice. It may save your own or a loved one’s life.

Editor’s note: If you’re interested in becoming a safer diver, encouraging others to do the same, or just want to come talk story and get some tips on breath-holding, deep diving, and safely land more fish come check out Freedive Hawaii’s talk story, safety workshop at Lumeria Maui on July 23rd