Yeah, I Missed the Wave of My Life… But I Peed in Kelly’s Pool 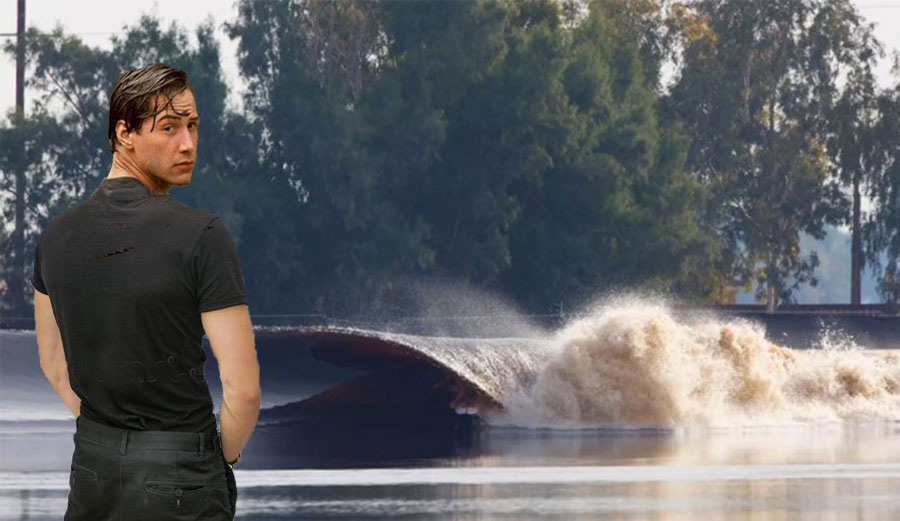 Peed in a lot of pools, but the Surf Ranch is the pot of gold at the end of the rainbow.

It’s been a long time since I first learned to surf. The early ’90s, if I remember correctly. Of course, things have changed since then—a lot. The old gang’s broken up (mostly my doing), and Rosie’s not around anymore. Came across an unclaimed piece of meat in Baja that turned out to be him, and Bodhi just disappeared. He showed up in New Zealand, though, after a botched bank robbery. But I’m still surfing. Changed my life, swear to god.

Now, of course, people are surfing in pools. Kelly Slater made one. You’ve heard about it? Most people want to surf in Kelly’s pool… but I just want to pee in it. Been peeing in pools since I was a kid, and I consider myself to somewhere in between an amateur and professional level pool pee-er. Peed in Austin’s NLand in 2016, peed in the Waco pool just last month. Spent a few soul-searching months in Europe—Munich, Vienna, St. Gilles Croix de Vie, and Zurich—peed in all their wave pools. I’ve even heard rumors that my Grandfather peed in the Wembley Pool in London, England, so I guess it might be in the genes. So you know what I did? I pissed in the pool. Cost me a bank heist worth of coin and quite possibly the barrel of my miserable life, but it was totally worth it.

But let me tell you, even with the weight my name carries, the Surf Ranch is a tough nut to crack. After I wrote a quick email to see about setting a date, they weren’t all that welcoming. “Johnny Utah?” they asked. “As in EFF-BEE-EYE agent, Johnny Utah? You’re a real person?” Honestly, I’ve been called a lot of things, but no one has ever questioned my existence before.

After a bit of convincing and a giant downpayment, I finally got a time slot. Since I’m currently living in L.A. running a meatball sub food truck called Utah’s Gimme Two, it was a pretty long drive to Lemoore. Nearly four hours without traffic. I packed the car with two surfboards, a meatball sub (two, actually), and four gallons of water. During the course of that drive, I drank all of it. Every last drop, and didn’t pee once. By the time I got through those gates, I was full near to bursting, but there was no way I was going to drop all that coin and then use the Ranch bathrooms. I was a little scared, to tell you the truth. There are signs everywhere warning against peeing in Kelly’s pool. “We don’t swim in your toilet,” they read, “so don’t pee in our pool!” But like an old friend of mine once said, “fear causes hesitation, and hesitation will cause your worst fears to come true.”

After changing into my wetsuit, I walked to the pool’s edge. I gotta admit, the wave was perfect, but I had to piss so bad, I couldn’t concentrate. I was bouncing up and down like a baby in a jolly jumper when a security guard walked over to me. He looked at the board I had under my arm with scorn. “What’s this pig board piece of shit?” he asked. “It’s still got the price tag on it, for Chrissakes. What’d you do, buy it yesterday? You’ve got no business out here whatsoever.” Little harsh, if you ask me, but culturally on brand, and I guess he’s used to seeing pros. Little did he know I had no interest in actually surfing. I just wanted to fuck up their PH balance with four gallons of urine. “Look at it! ” I answered. “It’s a once in a lifetime opportunity, man! Let me go out there and get one wave. Just one wave before you take me in. What am I gonna do, paddle to Fresno?”

He relented, of course. I had paid my money, so he had no choice. Paddling out, I could barely contain myself. Not from excitement, but because of the torrent of pee that was threatening blow open my you-know-what. I had to time it right, though. I didn’t want to waste it on the paddle out. I heard the wave-making machine fire up. My wave was coming. It welled up against the wall, building in size. As it approached, I spun as if to paddle for it, then sat back as it went underneath me and let fly. There was so much pee. It was the biggest pee I’ve ever had. Niagra Falls, the Great Lakes, the Bering Sea. It was a deluge of urine, hot against my legs, pouring into Kelly’s Pool there was so much pee the water changed color. I was in ecstasy, my eyes closed, head turned toward the sun. Suddenly, I heard screaming. It was Raimana on the ski, hollering his head off and speeding towards me. He knew what I was doing from the look on my face. Everyone knew what I was doing. I couldn’t stop. Didn’t want to stop. Raimana pulled up, the ski sucking in almost entirely urine. I smiled up at him, knowing that no matter what the consequences would be, I had done it. I had peed in Kelly Slater’s pool.

Editor’s Note: No, this is not real.