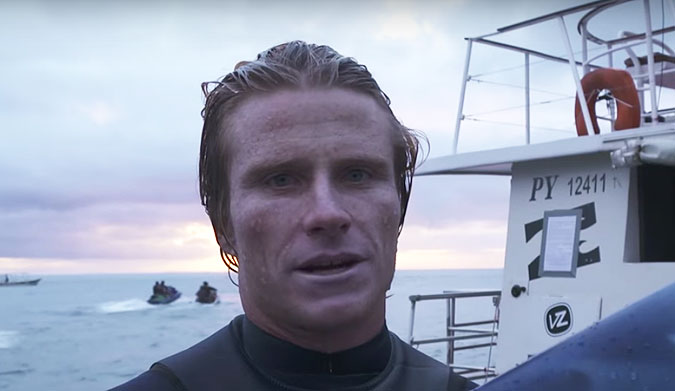 In the end, stunt work is a lot like surfing big waves– it take a lot of preparation. It isn’t about being crazy, it’s about being calculated.

Editor’s Note: The following is based on a conversation with Mark Healey about his stunt work in the upcoming film, Point Break. Mark was just one of many incredible athletes–Bruce Irons, Ian Walsh, Makua Rothman, etc.–enlisted to help make the remake what it is. Point Break opens in theaters December 25th.

I’ve been doing stunt work for about five years now. When I first got into it, Brian Keaulana got me on a couple of jobs, and the whole thing evolved from there. Now I’ve worked on a few films and TV shows, including Lost, Chasing Mavericks, Hawaii 5.0, and most recently, Point Break. I really enjoy it.

When the Point Break remake started, they had a particular scheme for me in mind. They called me up to tell me that I was the guy for the job, but I didn’t even get to do any surfing. Since most of the characters are regular footers, they wanted me to do a long free dive scene that ended up taking about three weeks to film. The surf stuff, though, is easy–the hard part about stunt work is things like taking hits to the chest and falling down escalators backwards.

Any time you’re going into a stunt, you’ve rehearsed it, gone over the scene, and had a meeting about it beforehand. You know what you’re doing already, but when there’s a big crew like there was on Point Break, there’s a lot of pressure to get it done right. You have to go scene by scene by scene, and if you get behind one day, it costs them a lot of money. You don’t want to screw it up.

That said though, as a stunt performer, you have all the say in the world in regards to what you can do. A good stunt coordinator will always ask the stunt person if they’re ok with the shot. There’s a wide range of styles when it comes to coordinating, but ultimately it’s up them to make sure that the performer is comfortable, while at the same time making sure the shot gets done.

When it comes to filming stunts in waves, it works the same way as a contest: you either have a permit or you don’t. People can run surf contests because they have a permit from the State or the government, and since productions have to keep their books in order, they have to make sure they get them. That was the case at Teahupoo.

Of course, safety on stunt jobs is really important. I had a bit of input when it came to crewing for the Maui shoot, and primarily the Jaws shoot. That’s one of the great things about working with Brian on films. He’s so open-minded–he’s such an accomplished person, but he doesn’t work with that ego.

In the end, stunt work is a lot like surfing big waves– it takes a lot of preparation. It isn’t about being crazy, it’s about being calculated. The most successful stunt performers just do enough to get the shot, and nothing more.