Why It’s Impossible to Quit Surfing

Editor’s Note: The following piece was originally published by SURFER Magazine, but here it is again in case you missed it the first time. Still true in our eyes. 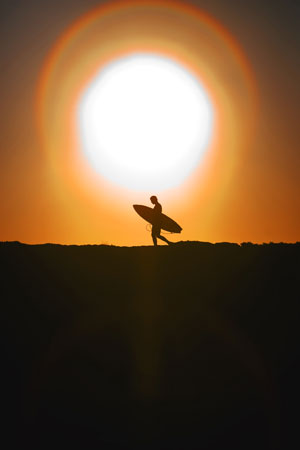 Could you quit? Photo: Seth Migdail

I know it’s possible; I just don’t think I could do it. I’ve seen others drop the sport without much struggle, yet I’m not sure I quite understand the circumstances or physiology required to walk away from the ocean.

In Steven Kotler’s West Of Jesus: Surfing, Science and the Origins of Belief, Kotler discovers (among other things) that the chemical processes that occur during the act of riding a wave closely mirror the emotional trajectory of drug use – specifically anti-depressants. His findings illustrate how difficult quitting surfing can be; it’s literally like kicking a drug habit. The thrill of extra-corporeal experiences roots itself deep into the mind and body, making surfing more than a hobby. It becomes medicine.

That’s not to say other sports don’t have the same capacity to addict, but in my opinion, surfing more effectively captivates its participants because the playing field is dynamic; a surfer must take into account the whims of the environment as the landscape transforms; he must be wholly engaged, which is a potent hook.

So how do you quit?

The most common and obvious answer I hear to this question is: “I moved.”

I’d argue that you can move away from the ocean without quitting surfing. It doesn’t count as quitting if you can still get to the beach two weeks out of the year with a board bag full of fiberglass. That’s not quitting; it’s being inconvenienced.

Another common answer I heard verbatim at the grocery store the other day: “I’ve got a family and wife and I don’t have time for that crap anymore.”

My retort: “You picked the wrong family and wife…or else surfing clearly didn’t mean very much to you in the first place.” A surfer could never refer to surfing as “crap,” and unless I’m vastly misinformed about life’s pursuits (entirely possible), a wife and family should not obstruct one’s primary passion; they should supplement it.

The last excuse I hear frequently goes like this: “My body just can’t take the abuse anymore…”

In my opinion, this is the most legitimate dispute. I remember a quote a friend of mine had inscribed on his wall in high school. It read: “In the end, gravity always wins.” I’m not a Radiohead fan, but this Tom Yorke quote, depressing as it may be, bears a lot of truth. Time will wear your body down, and aging can be a harsh process. Even as I begin to understand that physical limitations might prohibit a person from catching waves, I think of those exceptions (that I’m sure some would contend prove the rule).

I think first of Doc Paskowitz, waking up every morning at the age of eighty and riding a few waves on his belly to shore – wearing the same smile as on his first wave in Texas. Said Paskowitz, “My road has been a straight road since the day I learned how to swim at nine years of age in front of Murdoch’s Bath House in Texas to the present day where I pushed myself off to into the ocean on a 9’0” soft top and rode on my belly. It is just one long road.”

I think of Jesse Billauer dashing down the line with the help of his friends. I think of Bethany Hamilton, and I shake my head at this excuse too. And I arrive at this conclusion:

If you want to surf, you will.

But you can never quit surfing; if you quit, then you must never have surfed.