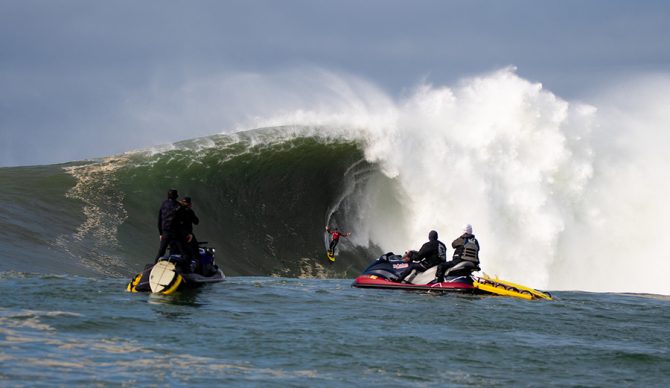 Throughout the course of surfing history, there have been those whose performances have redefined what collectively was thought possible. The bold California crew who left first tracks at Waimea Bay in 1957; Gerry Lopez, and later Shaun Tomson inventing modern tube riding at Pipeline in the 1970s; Christian Fletcher’s aerial assault at Lower Trestles; Shane Dorian’s paddle-in push at Peahi; Kai Lenny’s recent big wave blitzkrieg.

Quite different, though, are those singular rides that in their sheer outrageousness have transcended the realm of possibility, instead setting a new standard for what was even imaginable. Picture Laird Hamilton’s Millennium Wave at Teahupoʻo, for example, or Koa Smith’s 27-second barrel at Skeleton Bay. Both rides represented more than just the next step in the evolution of surfing performance, but throughout their fleeting seconds (though not so fleeting in Smith’s case) signaled a total paradigm shift, each a point of departure from what was to what now is. The unimaginable suddenly becoming imaginable.

Which brings me to Peter Mel’s beyond-epic barrel at Maverick’s on January 8. We’ve all seen it by now, the picture-perfect, sitting-there-in-the-channel footage posted on all the surfing websites. It even made the evening news in some coastal television markets. And no wonder — as rides go, it couldn’t have been more entertaining. A perfect three-act drama played out on a moving 50-foot stage: the hero’s roll-in-to-late drop, the hair’s breadth escape from the thundering lip as he pulled into the dark, cavernous tube, his heroic stance as, wreathed in angry spit, he emerged into the sunlight and safety.

An outrageous ride, yes. But any more outrageous than so many of the other amazing rides witnessed during what has to be considered one of the best big wave seasons in memory, not only in California but Hawaii and Europe, as well? Sure, plenty in the surf media hedged their bets, with soft-pedal headlines like, “Did Peter Mel just catch the Wave of the Decade at Maverick’s?” and “Peter Mel Just Raised the Bar…,” etc., etc. But no, the bar wasn’t just raised, it was leaped over by a mile. And yes, there’s no question that this is not only the wave of the decade at Maverick’s, but the best ever ridden at that fearsome break, simply because before this ride was witnessed by the whole surfing world, it was unimaginable. To position oneself outside the known lineups, paddle into a wave this size at Maverick’s and from behind the bowl pull into the barrel off the bottom instead of drawing a safer line through the center…simply unimaginable.

At least to anyone but Peter Mel, it seems, who for almost 30 years had a picture in his mind of what might be done if ever faced with a wave like this.  A picture that, by his own admission, frightened him. And yet, when presented with the opportunity — this once-in-a-lifetime wave — he rode it with an aplomb that, while it belied decades of commitment to the Beast of Pillar Point, expressed more deeply a manifestation of the imagination. Not only his imagination, but that of all those surfers who would like to believe that if ever faced by our own once-in-a-lifetime waves, we’d ride as Peter did.

So yes, I say that Peter Mel’s January 8 ride at Maverick’s certainly belongs on that elite list of singular waves that have redefined the imaginable. And critics can wail and curse and comment — call me a kook because I’m not a big wave surfer and have no business making this sort of call — and to that, I say fair enough. Yet to those who choose to say “one of the best…” or add a question mark to the headline, consider this: has any wave ever in history so dramatically, yet so eloquently, made the statement that Mel’s did that day? Not that he’s the king of Maverick’s or that this wave was any better than any of his others —or even better than any wave we might ride, of any size. But rather the clear assertion of what for so many surfers is unimaginable: that instead of behind, our best days of surfing could still lay ahead.