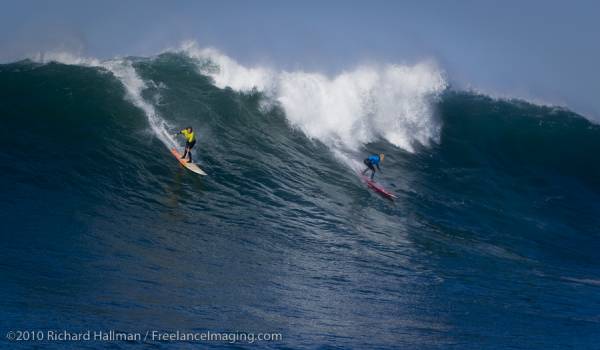 "Oregon...Hmmmm.... All I could think of was freezing cold water and Great White Sharks, but what an amazing opportunity for women's surfing," said Keala Kennelly, the first-ever Women's Big Wave Contest Winner. Photo: Richard Hallman/Freelanceimaging.com

I told myself when I quit the World Tour that I would never travel anywhere to surf where the water was cold enough to require more than a 3/2 wetsuit. So I was surprised to find myself placing an order for a 5mm wetsuit with a hood, booties, and gloves a week ago. I had been invited to participate in a Women’s Exhibition Heat at the Nelscott Reef Big Wave Classic in Oregon, which was going to be a paddle-in only event for the first time in its history. This was also the first time that women had ever been included in the Big Wave World Tour.

Oregon…Hmmmm…. All I could think of was freezing cold water and Great White Sharks, but what an amazing opportunity for women’s surfing. I felt like it was my duty to suck it up and go.

I had already ordered some winter guns from my shaper, Ian Wright, so I felt confident that my gear would be sorted by the time the contest ran. After all, the waiting period lasted from mid-October through March. Surely, I’d have ample time to train and surf some big waves in Hawaii – maybe even take the 5 mm wetsuit for a test-drive. You can imagine my shock when the contest was called to run on November 2nd. That was just 48 hours away.

Panic set in. My boards wouldn’t be done for at least three weeks. Luckily, Greg Long offered to lend me one of his old boards and have his brother, Rusty, bring it to Oregon for me. Hopefully, my wetsuit would reach me in time.

Fortunately, I managed to collect the cold-water gear I needed during a Fed-Ex mission between connecting flights. Exhausted, I collapsed into my seat on the airplane with five hours to think about the adventure ahead. After landing safely at midnight, I embarked on a magical drive to Lincoln City, Oregon: the home of Nelscott Reef. Even through the darkness of the night and the eerie fog you could see the silhouettes of ancient evergreen trees piercing the sky. Flashing blue lights snapped me out of my trance. Was I really getting pulled over right now?

I was. I may or may not have speeding, but I showed him my Hawaii Driver’s License with the pretty rainbow and got off with a verbal warning. Apparently, they’ve got a soft spot for the Aloha State up here. Then, after missing a crucial turn, I found myself twenty miles too far north of my destination. I finally arrived at the hotel just before 4 AM on the morning I was set to compete.

I was too excited too sleep. Constantly worried about missing my heat after such a long journey, I tossed and turned all night. I finally got up for good and headed down to the beach around 11am. The event had started late. The waves were gigantic. Just getting competitors through the shore break and out to the lineup on jet skis proved nearly impossible. I found Rusty Long in the parking lot, and he graciously gave me Greg’s board, so I got acquainted with it pretty quickly.

I ran into Mercedes Meidana, one of the seven female invitees, and she told me that I was one of only three female invitees to show up. This surprised me, considering the event seemed like such an amazing opportunity for women. I guess the short notice made it difficult for some to get there.

It also surprised me to learn that they were judging the women’s heat like a contest. I gave up competing a few years ago, so I was a little apprehensive at the idea. We were slated to go out right before the Men’s Final so we suited up and were getting ready for our heat when Mavericks charger Tim West appeared with all the color drained from his face as if he had seen a ghost. He had taken a bad wipeout in his heat and was held under for so long that he blew out both eardrums and was throwing up underwater. We asked him how big it was, and he said he didn’t want to tell us: thirty-foot Hawaiian…or sixty-foot faces.

West had advanced, but was so rattled that he decided to call it a day. That’s when I knew this was not the time to send the women out in their Big Wave World Tour debut. We would be running for our lives – not catching waves, and that wasn’t going to make us look good. Big Wave World Tour Director, Gary Linden, radioed in that the swell seemed to be picking up, and he didn’t think it was safe to send us out.