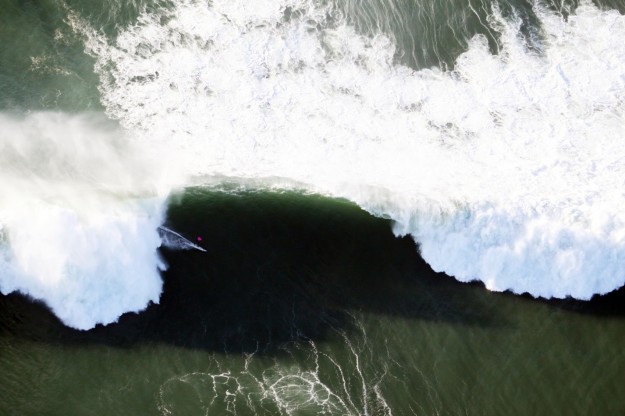 The surf at Nelscott Reef was menacing. An aerial image of a bomb surfed by Men's winner, Kohl Christensen. Photo: Bella Hunt

We decided to hold our heat the next morning, which was a big relief and turned out to be a good call since lack of daylight had become an issue. That morning, I wanted feel how cold the water was before catching the ferry out. I had some Hawaiian rock salt that a friend had given me in Maui years ago. He told me to take it to foreign lands and throw some in the water for luck and protection. Amazingly, I found a single Hawaiian Ti leaf on the pavement in the parking lot, which struck me as odd because I don’t think Ti leaf grows in Oregon. I picked up the Ti leaf, poured the Hawaiian salt in it, and wrapped it up into a little package – tying it closed with a piece of Oregon grass and took it down to the water’s edge. I placed the offering in the water and watched as the current sucked it out into the thundering shore break. It disappeared under the foamy whitewater. I kind of laughed at myself because it’s not like me to do things like that.

I walked back up to the parking lot and was dealt the worst news of my life. Andy Irons had died of Dengue Fever that morning. I had almost no reaction, because I was in so much shock that my brain would not even let me process the information. The rest of that day was a blur. I went back to the hotel, crawled into bed, and cried all night.

Andy was one of the most important people in my life, and it was impossible for me to accept that he was gone. The next morning after only about two hours of sleep, I stepped over the pile of Kleenex on the floor by my bed and went down to the contest. I felt like a zombie, but it was a beautiful day; the swell had dropped and the ocean was clean.

I took the last ferry out, because I was having trouble pulling myself together. Sitting on the beach with my head down, with tears streaming down, I asked myself how I was going to do this. I felt so weak. I climbed onto the ski and tried to focus. I guess it was nice to have a task to distract me from my thoughts.

Once the heat started, the first set came through and cleaned all three of us up. I was held under for a long time. I don’t know if it was the extra weight of the wetsuit or the fact that my body was just emotionally exhausted from crying all night, but I finally surfaced and was so happy to have a jet ski there to pick me up. I got dropped out the back right as another set approached. This time I was right in the spot. I turned and stroked into it with my teeth clenched, made the drop, and rode it out. Later, they told me I made history with that wave. I was confused. I had no idea that I was the first woman to surf Nelscott Reef.

I watched fellow competitor Savanah Shaugnessy turn and paddle for a set, but she was too deep. Later, Savanah and I split a peak and then shared another set wave. With five minutes left, they asked if we wanted a twenty-minute extension. The competitor in my head was saying, “No way KK. You’ve got this thing won.” At that point, I had three good waves, Savanah had a good wave and a wipeout, and Mercedes had yet to catch a wave.

I then asked myself what would be best for women’s surfing. Mercedes still needed to catch a wave. We asked for the extension, and with two minutes left, Mercedes got one of the biggest waves of the heat. We returned to the beach with big smiles on our faces, high-fiving each other for our efforts out there. Even though I walked away with a trophy engraved with the title “Top Chick,” I think women’s surfing was the big winner that day. I dedicated my win to my childhood friend and hero, Andy Irons.