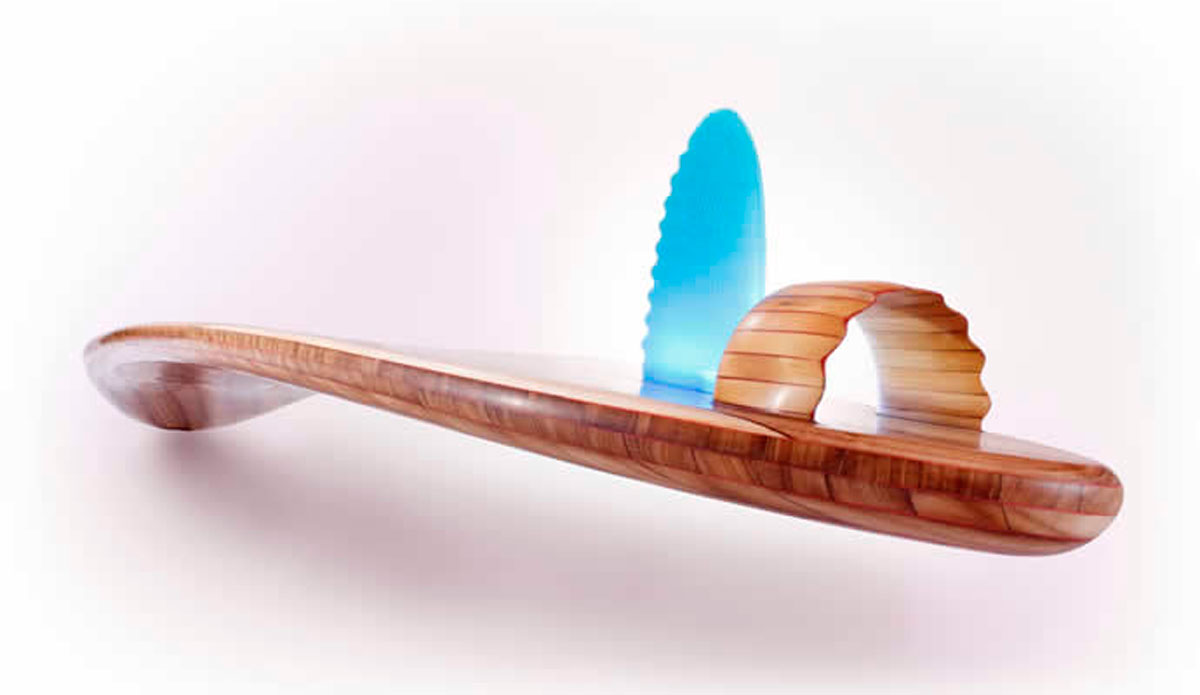 Just for good measure, there's a normal fin on it too. Well, almost normal. 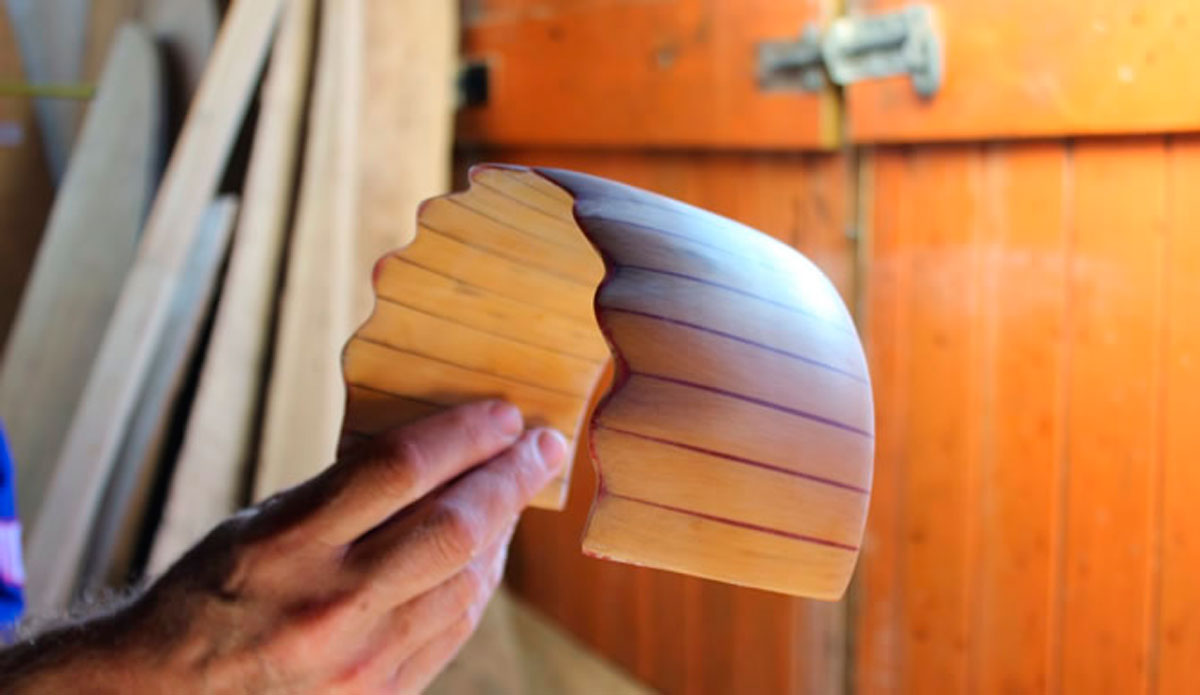 I'm not sure that years of keel and fin development have missed the mark this badly. 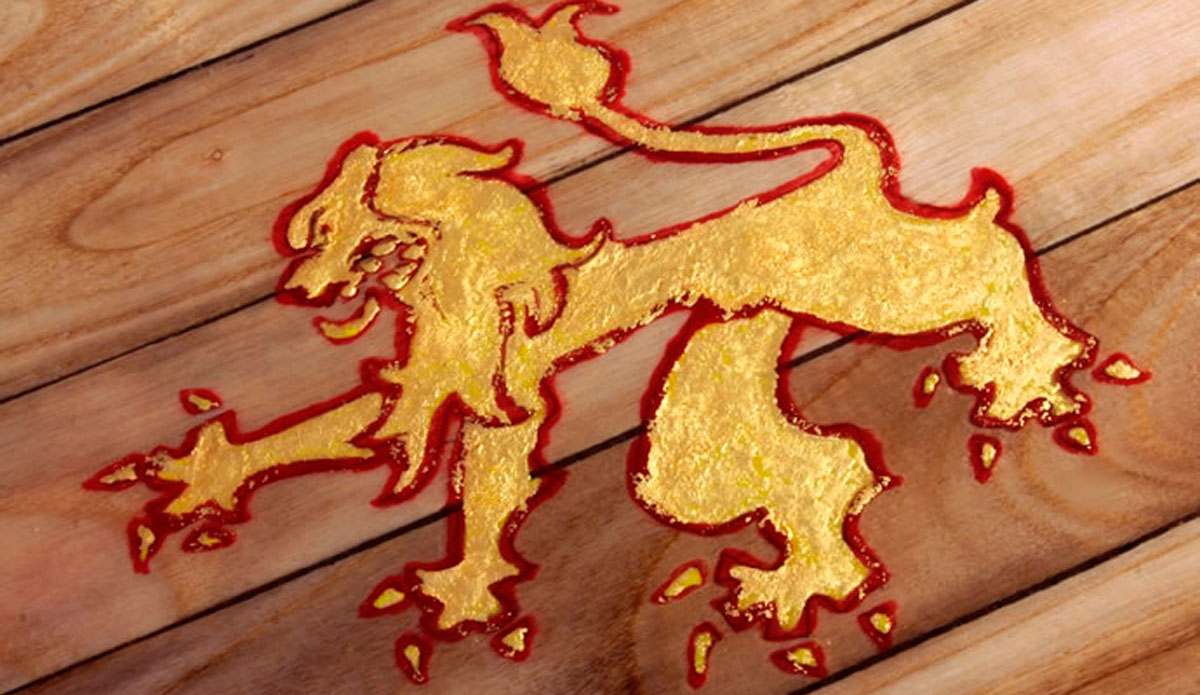 Is gold the newest shark deterrent? There has to be a reason for it.

Holy shit, someone bought it. A few days ago, it came to light that New Zealand shaper/surfer/bearded guy Roy Stuart made a surfboard and valued it at $1.3 million. I, along with many others, scoffed. If I had scoffed any harder, I would have developed a bleeding aneurysm in my brain. But he sold it – and he sold it for more than he valued it at.  “Not bad, eh?” Roy said. Not bad is right, Roy.

Originally from Putaruru in Waikato, Stuart has been building wooden surfboards for nearly two decades, refining his designs and trying to make something that would achieve his version of the ultimate ride (and that he could sell for a million dollars). I suppose he must’ve found it when he created the Rampant, because that’s the one that sold for too much money.

The Rampant weighs 31-pounds and is made from paulownia wood. It’s a 10’6, it has a hollow wooden hull, a very strange looking tunnel fin, and of course, a lion made of gold painted on it. Because lions made from gold should be on everything worth more than a million dollars.

So who’s the guy that has more than a million dollars to spend on something as trivial as a surfboard? It’s a mystery. All that’s known is that he’s involved in the pharmaceutical industry, at least according to Roy.

“I’ve been really scraping and doing it on the smell of an oily rag for a long time,” the 53-year old Stuart told the New Zealand Herald.  “I’m not going to justify the price. To me, it’s just a number. How much more is it worth to have something you really like? It’s really a moot point.” …says the guy that just sold a surfboard for more than a million dollars. Hey, if it’s just a number, why not ask for one dollar? Or eight quadrillion? It’s just a number, right?

The Rampant is pretty nice, though. And while it looks like it’s a piece of art instead of a surfboard, Stuart was quick to disagree. “From the beginning,” he said, “I made a solemn vow that I would never do anything to a board that wasn’t solely for its functional purpose.” Stuart believes the function is what makes it beautiful, which is a nice sentiment. “In this sort of discipline, art comes from the ride,” he explained. “If it works well, it will be enjoyable to look at.” So what about that gold lion? Well, it must have  function, I guess. Maybe gold has some kind of incredible low-friction quality. Or maybe sharks hate gold, and it’s some kind of shark repellant. And if that’s the case, Stuart doesn’t have to worry about sharks ever again, because he just hit the mother lode. 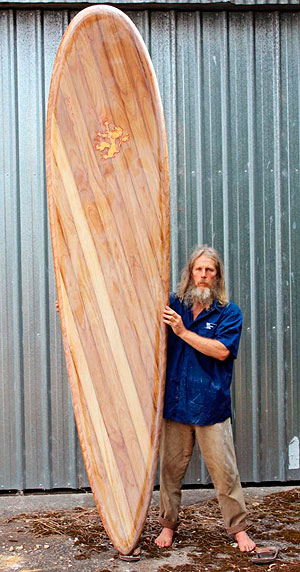 At least he’s using a shitty old flip flop to stand more than a million dollars worth of surfboard on.