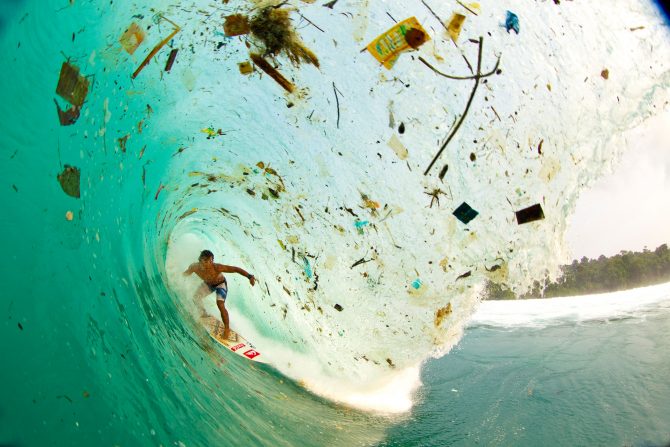 My most iconic image is the one I like to call the “Wave of Change.” It’s a photo shot in Indonesia of Dede Suryana almost nine years ago. But to this day, it’s still publicized and used in environmental campaigns around the world to create change for our oceans. It’s one of the images I’m most proud of, shot on a trip with a few friends.

You don’t always hear these stories of what it actually took to get the shot. It’s not all luxurious, easy, and simply scoring waves. We showed up along the coastline, a remote location, no one around, and no waves that first day. The next day, the waves start filling in. In fact, it was spectacular. It was beyond good for three hours. We saw some of the best waves I had ever seen and then, slowly, a bunch of trash and debris starts coming in with the waves. What’s going on?

We started picking up more trash than we could take, and since we were living on a small boat for the next four days, we couldn’t take much. Suddenly, trees, more trash, and more debris started coming through. And that’s when we were able to capture the “Wave of Change” image. Shortly after that wave, the wind switched and it all turned onshore.

After 24 hours of travel, we got four hours of good waves and then we sat there for the other three days waiting for the wind to change. It never did. But it was worth it to me. And that’s the story.

When I see that image, I think back to all the travel and effort it took to get there. I think back to the adventure, the friendship, the stories, and the good times. That’s what an image does for me. It takes me back to those moments. There’s so much behind every image and that’s the beauty of photography. That’s what I love about capturing images: a story of a moment and how it made me feel.

Also, check out our recommendations on the best lenses, drones, and cameras for surf imagery.