Here’s What It Looked Like Inside Hurricane Sam, the World’s Most Powerful Storm

Inside the guts of a hurricane is not a place anyone in their right mind wants to be. It is, however, an interesting place, and since humans are curious by nature, we can’t help but wonder what the guts of a hurricane might be like. We can imagine — wind, water, etcetera — but up until now, we haven’t actually been able to observe it. On September 30, a little red surfboard with a sail on it floated right into the center of Hurricane Sam, which was the most powerful storm on the planet at the time.

“The Saildrone Explorer SD 1045 was directed into the midst of Hurricane Sam, a category 4 hurricane, which is currently on a path that fortunately will miss the U.S. east coast,” NOAA wrote in a press release. “SD1045 is battling 50-foot waves and winds of over 120 mph to collect critical scientific data and, in the process, is giving us a completely new view of one of Earth’s most destructive forces.”

The storm is what’s called a “fish storm,” since it won’t make landfall. The vessel used to capture the footage has a sail on it called a hurricane wing, which makes it possible to operate in extremely windy conditions, like the ones found inside a hurricane. It collects real-time observations which will likely prove useful in finding new information about exactly how and why hurricanes form. 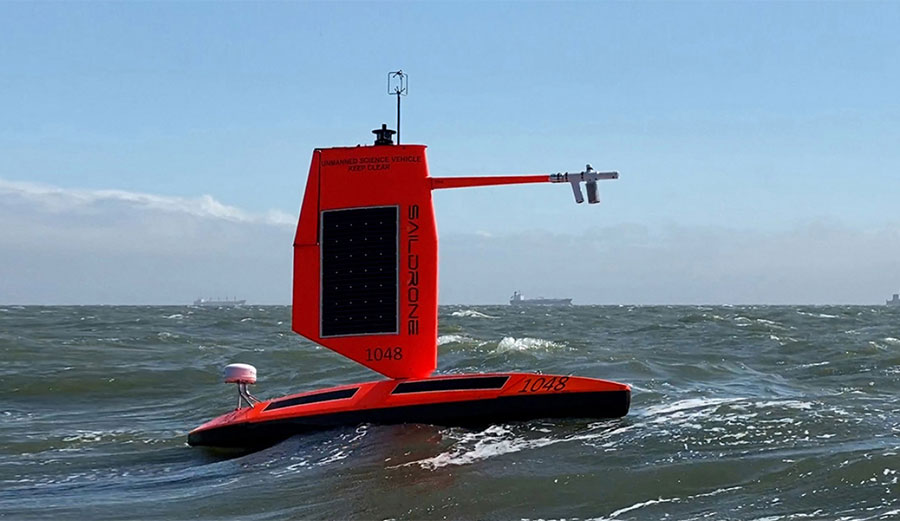 The saildrone is one of a fleet of five. Photo: Saildrone, INC.

SD 1045 is one of five saildrones created to learn more about these storms. They’ve been floating around in the Atlantic Ocean during hurricane season in a bid to learn as much as possible. With luck, the information gleaned from inside hurricanes will save lives in the future.

“Using data collected by saildrones, we expect to improve forecast models that predict rapid intensification of hurricanes,” said Greg Foltz, a NOAA scientist. “Rapid intensification, when hurricane winds strengthen in a matter of hours, is a serious threat to coastal communities. New data from saildrones and other un-crewed systems that NOAA is using will help us better predict the forces that drive hurricanes and be able to warn communities earlier.”