Bobby Martinez and the Death of the Rebel 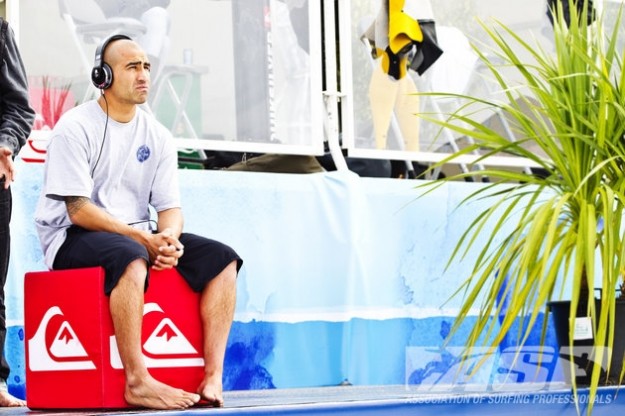 Surfing needs people who stand for something, anything, besides what their sponsors tell them will look best on the year-end report. The nearly sponsorless Martinez gave us that. He was, perhaps, one of the last of an almost extinct breed. Photo: ASP/Kirstin

When the Quiksilver Pro New York is done and dusted, and the city with the shortest memory in the world has forgotten yet another “world-changing” event, this week will vanish quietly into the annals of surfing history as the competition in which the ASP turned its rule book from a 28-year running joke, into a complete farce.

The good folks at ASP HQ could stomach Sunny Garcia flipping them the bird every other heat. They’re not too bothered by a bit of marijuana, weed, ecstasy, cocaine and um, heroin in their ranks.  They will even put up with surfers skipping a few events with bogus reasons or no reason at all.  But criticism they cannot abide.

It was always going to be Bobby Martinez who pushed them too far.  He’s had too much against him since day one: he’s a tattooed, goofy foot with a persecution complex, little or no flinch reflex, and a near pathological disregard for self-preservation.  He’s also Mexican.  Martinez was the only true maverick on the World Tour for the last six years.  For proof, look no further than the number of people who hate him.  Almost every article concerning Martinez that hits the net is packed full of detracting commentators, especially in Australia, where he has, both fairly and unfairly, come to represent the whiny, spoiled pro who constantly feels as though the world owes him something.

He is, however, one of the rare pros who is more highly respected by those who know him than by the those who don’t.  Bede Durbidge is another.  Mick Fanning is a third – unless you’re a, you know…juden.  Otherwise, the number of hair-raising stories circulating around World Tour competition sites about those really “humble” and “giving” pros could fill a weekly tabloid. And yet those who know Martinez have always spoken highly of him to this reporter.

That said, there is no one ambivalent about Bobby Martinez.  And that’s the way it should be.  Though undoubtedly a better surfer, the late great, Andy Irons had a similar following, and a similar, though less vocal group of detractors.  The difference was that he knew better than to bite the hand that fed him.  Or at least than to bite it repeatedly in public.

Plenty of wild, angry men have come and gone since Martinez finished seventh in the world during his rookie year, but none of them surfed like Bobby.  None of them won Teahupoo twice.  Or Mundaka twice, for that matter.

In the last of Spain’s bullrings, they often say that if a bull comes out of the gates too hot, it’s no good.  It won’t fight ‘til the end.  It will charge and snort and gore anything in sight for the first part of the corrida, but when it comes time to die, it will simply lay its head down and wait for the matador’s sword.  The best bulls fight ‘til the end.  They will just as soon kill a matador in the final pass as when they first took to the ring.  Martinez surfed like a bull: powerful, furious, yet with improbable grace and undeniable swagger.  The nonchalance of his stance in even the heaviest waves and most critical sections is unforgettable.

He was never great in small waves.  He also had a habit of sitting out the back alone, hunched slightly, waiting for sets that never came, as if he was too proud to grovel for his score.  It was an approach that his fans loved and fretted in equal measure. Martinez bitched and moaned louder and harder than perhaps any Tour surfer ever, but he never blamed others when he was at fault, and he was never broken.  In his last event, in a heat that even his fans expected him to lose, he managed a victory (ostensibly) just to get a chance to dig his horns into the ASP one last time. It was a vicious, unfocused and borderline nonsensical rant, but he said exactly what many fans and some pros are thinking.  Even those associated with the comp couldn’t help but grin guiltily.  Watch the post-heat interview we published last week  (the comp site erased it) and keep an eye on Todd Kline.  The look of boyish glee that explodes on his face at the 25-second mark says it all.

Surfing needs people who stand for something, anything, besides what their sponsors tell them will look best on the year-end report.  The nearly sponsorless Martinez gave us that.  He was, perhaps, one of the last of an almost extinct breed: the pro surfer who isn’t just another PR man parroting boilerplate phrases cooked up by corporate focus groups.  With his departure, who’s left to shoot from the hip? Certainly not those who answered to agents, trainers, stylists, and PR managers since before their balls dropped. These protein shake pros are, to be sure, truly awesome surfers, but they are utterly bereft of personality in the public sphere (with the exception of Freddy Patacchia).

By axing Martinez, in what amounted to basically a symbolic gesture given that he was leaving anyway, the ASP played its hand, and it’s an ugly, tyrannical one.  In an organization that has, over 28 years, responded to recurrent, and often willfull, rule-flouting by some of its more popular stars with little more than wrist slaps, they’ve shown that the only real crime is talking stink about la famiglia and not moving enough merch to stay in the circle of untouchables.

Of all the things one can say to such hypocrisy, Martinez probably summed it up the best: “Fuck that!” If he was wrong about anything, it was his comparison to tennis.  This week, some of the top men’s players at the US Open forced the officials to extend the tournament instead of playing four days in a row. It’s not clear whether the best competitive surfers in the world are too dumb, too scared, too apathetic, or too content to stand up to their handlers, but they could certainly learn a thing or two from the tennis players. Instead, (with the exception of the final day, which produced some solid surf) they hop across chest high dribblers – waves many of them wouldn’t even paddle out in under normal circumstances —  with perma-grins on their faces.  And why not?  They get paid handsomely to take their families on a two-week vacation to New York.  La famiglia takes care of its own. 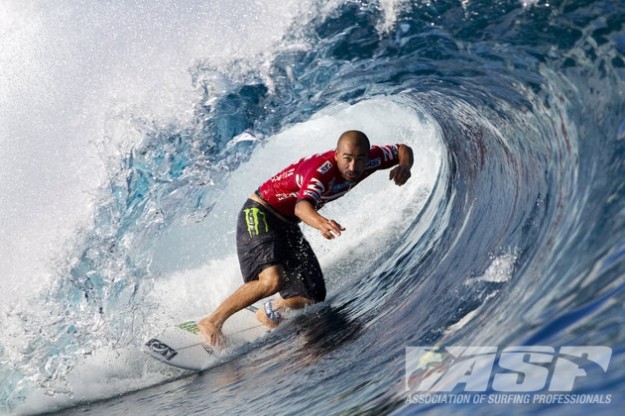