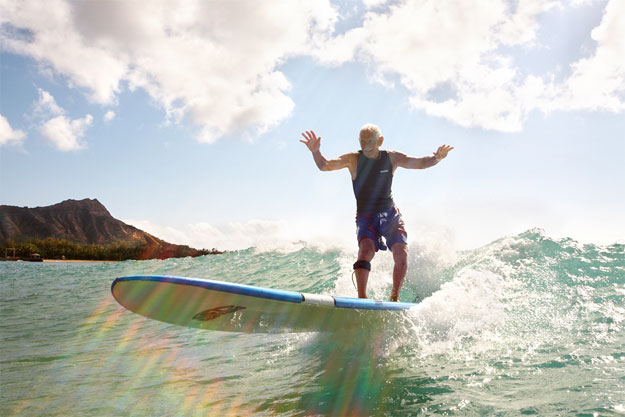 “There was a surf shop in Florida that used to put big swastikas on their boards, and I got hold of them and I really raised hell with them,” said Dorian “Doc” Paskowitz. “They called the Klu Klux Klan guys in, and that really scared the shit out of me.” Photo: Art Brewer

“Last week this multi-talented Negro became the first Jamaican winner of the Pan American championships, held in Cuba, signaling, amongst other things, an uncertain future for the Aryan domination of surfing,” wrote Smith. The ensuing outrage prompted the publication to delete the article from the website and the author to write a formal apology to the Wilmot family. It appeared that the writer intended no harm; he hoped to make a point ironically, but the damage had been done.

A few weeks later I caught up with Icah Wilmot to hear his perspective.

“Ever since the sport hit the mainstream market, the image of a white guy surfing on a blue wave has been the image of the sport,” said Wilmot. “The surfing industry needs to realize that the new nations and races in the sport with the correct amounts of support and exposure will bring surfing to the international arena. This increase in diversity of nations, and religions, and surfers within the sport is the only way forward for surfing in my point of view.”

To provide a bit of context, Stab’s Fascist issue was not the first time that surf culture has associated itself with the official emblem of the Nazi party. In fact, the swastika itself post-dates Nazi Germany, and was used by Eastern religions like Hinduism, Buddhism, and Jainism as a symbol of peace and prosperity. With that in mind, an early surfboard manufacturer known as Pacific System Homes Surfboards built high-quality multi-wood surfboards that featured swastikas burned into the tail. According to Matt Warshaw, author of The Encyclopedia of Surfing and The History of Surfing, it was common for affluent surfers to own Swastika surfboards. Later, when the Nazi party made the swastika its official symbol, PSHS renamed the line Waikiki Surfboards and altered their logo.

While PSHS distanced itself from the swastika when its connotation soured, many surfers continued to adopt it as a symbol of rebellion. According to Warshaw’s The History of Surfing, “In the 1959 film Search for Surf, three La Jolla locals dressed in Nazi stormtrooper uniforms…marched across the sand with blank-loaded automatic weapons, and ‘shot’ anyone wearing a bathing suit. Then they lowered themselves into a storm drain with a pair of Flexi-Flyers and sledded down to a beach outfall, where friends were standing by cheering and waving a Third Reich flag.”

Said Greg Noll in The History of Surfing, “We’d paint a swastika on something for no other reason than to piss people off. Which it did. So next time we’d paint two swastikas, just to piss ‘em off more.”

Through the 1960s and beyond, surfers effectively co-opted swastikas and Iron Crosses as symbols of suburban rebellion, sometimes referring to themselves as “surf Nazis.” “It meant that you were hardcore,” Warshaw told me over the phone. “People who were throwing those phrases around may not have even have known what it meant. It was the equivalent of being a frother, you know?”

More recently, professional surfers like Christian Fletcher have used equipment with swastikas and Iron Crosses boldly imprinted upon them, and although many presume that the iconography represents innocuous suburban rebellion, Jewish surfers can attest to the attitude’s more harmful affects.

“The early Orange County surfers were really anti-Semitic,” says Dorian “Doc” Paskowitz, the Paskowitz family’s 91-year-old patriarch. “I used to take a big beating for being Jewish in the early days. But I love to surf and I love to be around surfers so much, even though they used to give me a really bad time about being Jewish.”

“One incident that really upset me is that there was a surf shop in Florida that used to put big swastikas on their boards,” said Paskowitz, “and I got hold of them and I really raised hell with them, and they called the Klu Klux Klan guys in, and that really scared the shit out of me.”

According to Warshaw, the KKK’s ritual of burning crosses made a rare migration to Southern California when a group of surfers burned a cross in Kathy Kohner-Zimmerman’s (the inspiration Gidget), yard. Kathy Kohner’s father, Frederick Kohner was a Jewish-German filmmaker who fled Nazi Germany to Southern California and wrote the film about his daughter. One day, a member of the Malibu crew discovered Kohner was Jewish and torched a cross in their Brentwood driveway.*

In 2007 Doc Paskowitz formed Surfing 4 Peace, an organization that “that aims to bridge cultural and political barriers between surfers in the Middle East.” Over the past four years, the group has organized several events and gestures of goodwill in Israel, but Paskowitz says he’s seen little progress in changing attitudes of bigotry within surf culture.

“I think the little gang at Malibu is gone,” says Paskowitz. “They’re not there anymore to fan the flames, but I think the same attitude exists.”