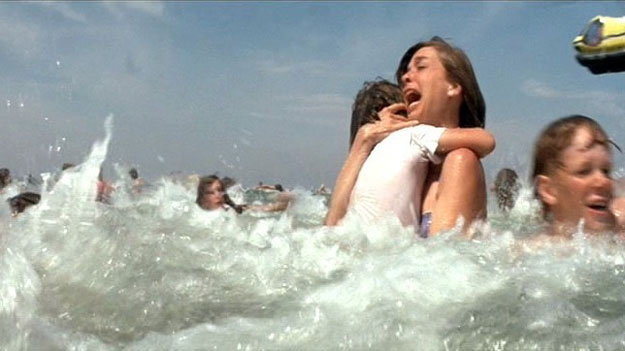 It was pandelerium at Shark Street Beach today when Sam McFakerson was viciously attacked by a Great White.

McFakerson was surfing with friends when the shark surfaced. The shark seemed intent on only one thing: eating human flesh.

“When I turned around, his tooth hit my foot, and he started to swim away,” McFakerson said before being rushed to the hospital with a half inch gash on the bottom of his right heel. “Well sure, it’s not that bad. But I got off one good punch before he swam off. I think that’s why he swam off,” he continued. “Otherwise, I’d be a goner for sure.”

McFakerson is expected to make a full recovery.

The beach has since been closed until further notice and the county has plans to destroy the shark when it’s found. A local fisherman has been tasked with finding the shark.

“Y’all know me. Know how I earn a livin’. I’ll catch this bird for you, but it ain’t gonna be easy,” he said.  “Not like going down the pond chasin’ bluegills and tommycods. This shark, swallow you whole. Little shakin’, little tenderizin’, an’ down you go.”

Ever read something like that? Ever wonder why you read it? Me too. Every time anyone in surfing has any kind of close call with a shark, the surfing interwebs explode like Jaws did when the air tank blew up inside him. Man, that was great. I’m not really much of a horse guy, but I’m reasonably sure that if a jockey gets his hand bitten when he’s feeding Seabiscuit a sugar cube, Equine Weekly doesn’t make it into a gory blood bath. And yes, I realize we’re not riding sharks, but you get the idea. Don’t nitpick.

Before I go any further here, let me clear something up. I don’t mean to  trivialize how incredibly terrifying a brush with a shark would be. I’ve never had one, and I hope I never do. Last time I saw a dolphin, I squealed a little bit. Yes, I squealed. Shut up. If I actually had a close call, I don’t know what I’d do. Every time I catch a dogfish, I have to get my best friend to get its horrible, snapping mouth off my line because I can’t get myself to touch its sandpaper skin or risk getting whacked with that disgusting, thrashing tail. And I’m a man. A man with a beard. I should be able to do this, but I can’t. Shut up.

And I’m guilty of chumming the turbulent waters of the internet myself. That’s actually what got me thinking about this. I wrote a short blurb about a shark attack a little while ago, and I started looking up old shark attacks (ah, the glorious time-wasting abilities of the internet). I found a ton, but most of them were not in any way substantial. A couple of stitches here, a toothy bite mark in a surfboard there.

But I think I know why surfing websites post about the smallest shark infraction. How many of you clicked on this because of the name? It’s nothing new: if it bleeds it leads. I want to see the pink mist and all that. Everyone likes a good gory tale, me especially. You should see my collection of zombie movies. It’s great. You’d be jealous. But zombies are different. They’re not real (yet). Sharks are, and scaring the living shit out of people isn’t exactly fair. And I’m not even going to get into that argument about whether it’s their territory or not. It is. That’s not even an argument. We’re in it. So are they. They eat meat. So do we. Yes, they have large teeth and cold, black, soulless eyes that haunt my nightmares, but we have thumbs and guns and brains and fish hooks. Not to mention that we’re killing WAY more of them than they are of us. Damn it, I got into that argument.

But do we need to read about every incident? It seems like something Fox News would do. Are we stooping to Fox’s level?  Are we just using scare tactics to get clicks? A little bit. Hey, you clicked on it, right? And so would I. But that’s not really the point I’m trying to get across. It’s not about clicks. It’s about spreading fear, like Fox News does. But spreading fear is spreading peanut butter on a brick. It’s useless – unless it’s Adam’s peanut butter, in which case you could build a house with it. So next time you go surfing, I promise you: you don’t have to be scared of sharks. Unless there’s one in the water. Then you should get out. Because sharks are scary as hell. And if you hear a bearded man squealing, don’t worry. It’s just a dolphin.