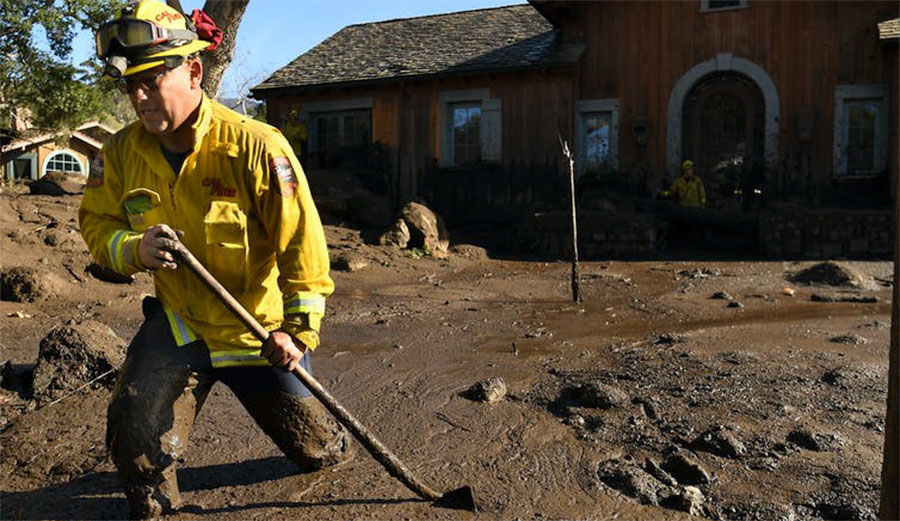 A firefighter checks homes after a mudslide that killed 23 people in Montecito, Calif., in 2018. Photo: Wally Skalij/Los Angeles Times via Getty Images

A powerful storm system known as an atmospheric river is heading for northern California and Oregon, a region in the midst of an historic drought.

While it will bring much-needed water to the parched region and should significantly lower the wildfire risk after a destructive fire year, it also brings dangerous new flood and mudslide risks, particularly in areas recovering from wildfires.

Wildfires strip away vegetation and leave the soil less able to absorb water. A downpour on these vulnerable landscapes can quickly erode the ground as fast-moving water carries debris and mud with it. The National Weather Service has warned of ash and debris flows through Oct. 26 in several burned areas, including the site of the nearly 1-million-acre Dixie Fire in the Sierra Nevada.

I study cascading hazards like this, in which consecutive events lead to human disasters. Studies show climate change is raising the risk of multiple compound disasters, and it’s clear that communities and government agencies aren’t prepared.

When Storms Hit Burn Scars, The Resulting Mudslide can be Devastating

California has experienced this kind of cascading disaster before. In early 2017, following years of drought, the region had a wet winter that fueled dense growth of vegetation and shrubs. An unusually warm and dry spring and summer followed, and it dried out the vegetation, turning it into fuel ready to burn. That fall, extreme Santa Ana and Diablo winds – known for their sustained low humidity – created the perfect conditions for wildfires.

The Thomas Fire began near Santa Barbara in December 2017 and burned over 280,000 acres. The following January, extreme rainfall hit the region, including the burn scar left by the fire, and caused the deadliest mudslide-debris flow event in California’s history. More than 400 homes were destroyed in about two hours, and 23 people died. 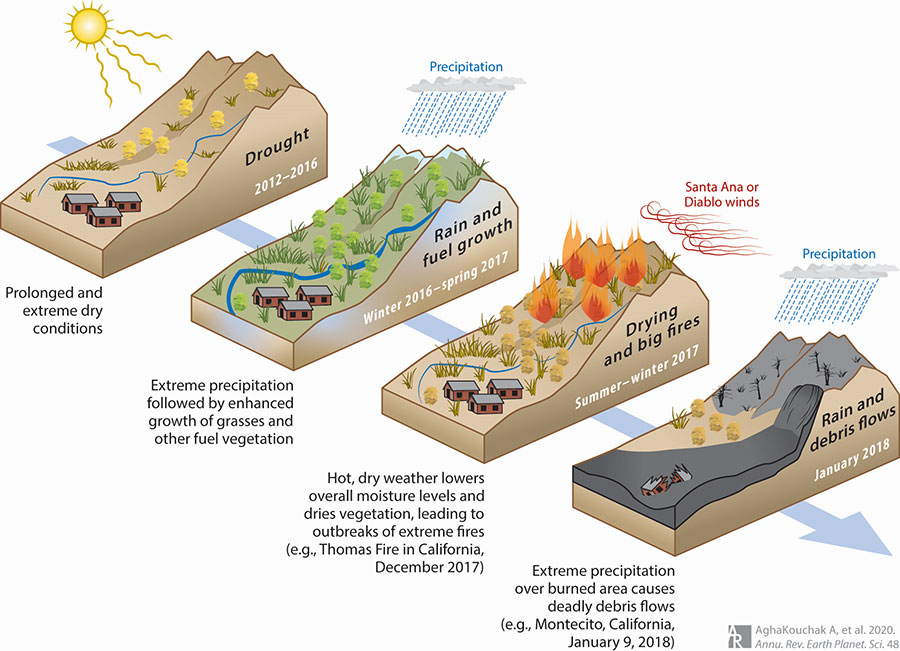 An example of the cascading effects of climate change for wildfires. Image: AghaKouchak et al., Annual Review of Earth and Planetary Sciences, 2020

These kinds of cascading events aren’t unique to California. Australia’s Millennium Drought (1997-2009) also ended with devastating floods that inundated urban areas and breached levees. A study linked some of the levee and dike failures to earlier drought conditions, such as cracks forming because of exposure to heat and dryness.

The individual drivers might not be very extreme on their own, but combined they can become lethal. These types of events are broadly referred to as compound events – for example, a drought and heat wave hitting at the same time. Their combined impact can be harder to forecast. A cascading event involves compound events in succession, like wildfires followed by downpours and mudslides.

While the drivers and physical mechanisms behind compound and cascading events are not fully understood, they are often linked to large-scale circulation patterns like the El Niño-Southern Oscillation (ENSO). Meanwhile, lack of preparedness and high degrees of vulnerability at the local level can also increase the impacts of multiple connected events.

With compound and cascading events likely to become more common in a warming world, being able to prepare for and manage multiple hazards will be increasingly essential.

Several research studies have shown that compound events with both drought and heat waves have become more severe and frequent in recent years. One study attributed the increase in the risk of these dry-warm events in California to human-caused global warming and projected that the increased risk of dry-warm conditions will continue in the future.

An important physical process responsible for increases in compound drought and heat is land-atmosphere interactions. Evaporation from soil cools down the land surface, similar to how the human body cools down by sweating. During droughts, the lack of moisture limits soil evaporation, which increases the surface temperature and eventually the air temperature in the area. Data shows temperatures during droughts are rising in many parts of the United States, including the Southwest – a pattern that is expected to continue in the future. 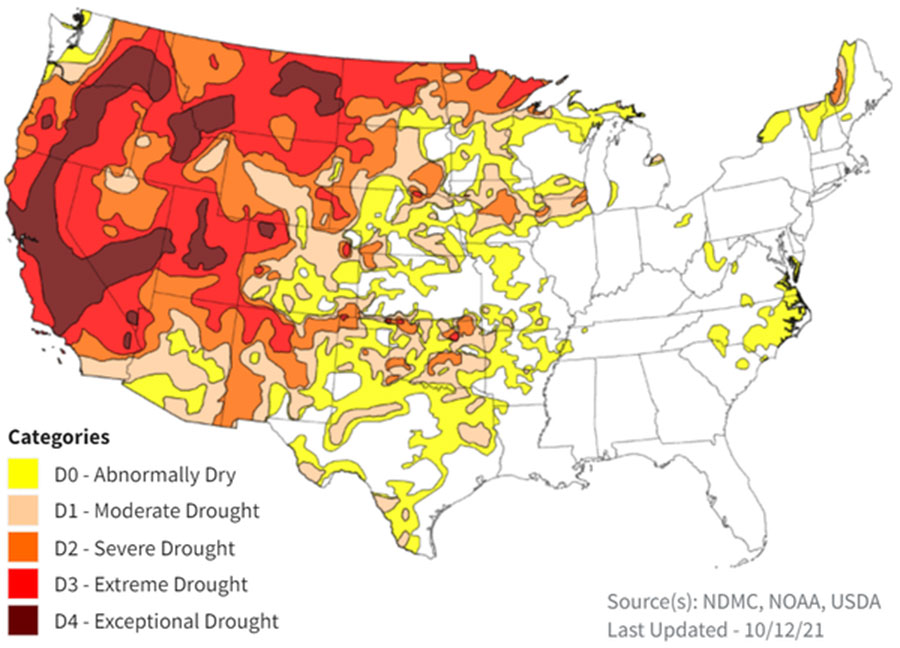 Most of the West is still in severe drought. Image: NOAA/NDIS

Numerous studies have also shown that droughts and heat waves increase the likelihood of wildfires. And wildfires can trigger other cascading hazards, turning otherwise unexceptional events into human disasters. 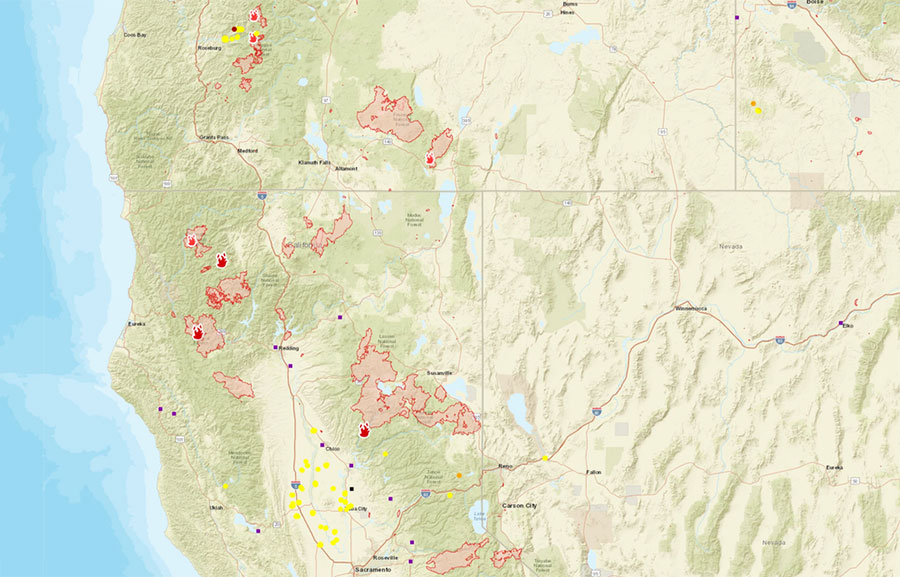 Large parts of northern California and southern Oregon had fires in 2021, some still burning in mid-October.
National Wildfire Coordinating Group

Cascading hazards are not limited to rain over burned areas. Soot and ash deposits on snowpack can increase snowmelt, change the timing of runoff and cause snow-driven flooding. Fires are not only increasing in size and severity, they are also occurring at higher elevations and well above the snow line.

It’s also important to recognize that human activities and local infrastructure can also affect extreme events. Urbanization and deforestation, for example, can intensify flooding and worsen mud or debris flow events and their impacts.

Despite the high risk when extreme rainfall and droughts interact, most research in this area focuses on only one or the other. Different government agencies oversee flood and drought monitoring, warning and management, even though both are extremes of the same hydrological cycle. 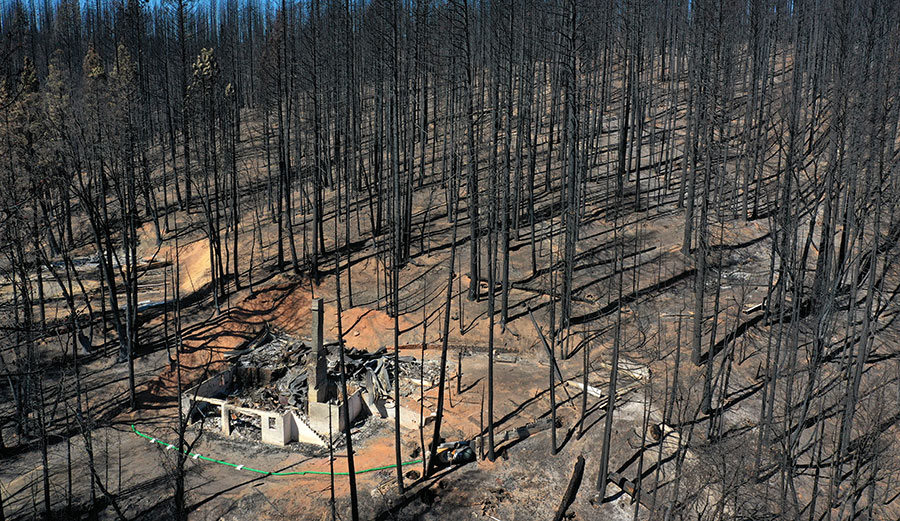 An aerial view of the location of the Dixie Fire near Greenville shows the bare soil left behind. Photo: Justin Sullivan/Getty Images

Recent studies and disasters show a strong need to integrate management and risk reduction strategies of droughts and flood. Focusing on one hazard by one agency can potentially have unintended consequences for another hazard. For example, maximizing reservoir storage when expecting a drought can increase the flood risk.