Sam Purkis
Professor and Chair of the Department of Marine Sciences, University of Miami
Community 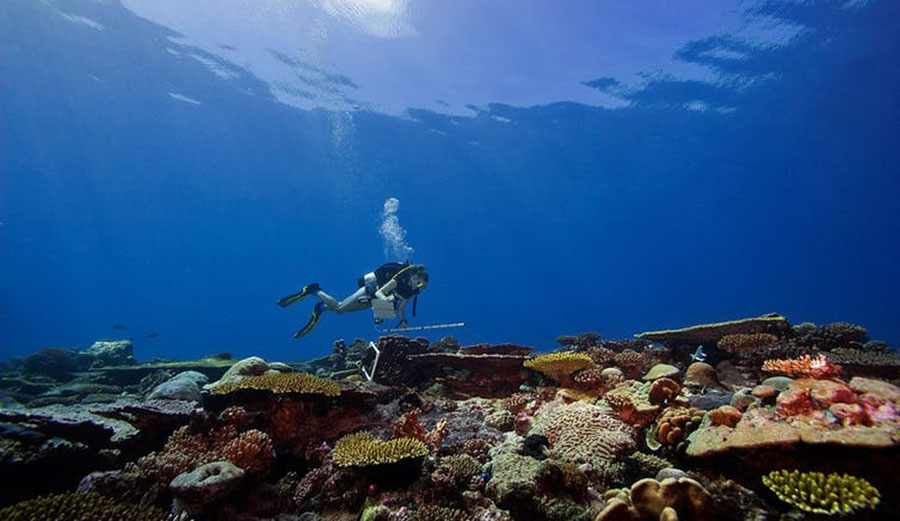 The Chagos Archipelago is one of the most remote, seemingly idyllic places on Earth. Coconut-covered sandy beaches with incredible bird life rim tropical islands in the Indian Ocean, hundreds of miles from any continent. Just below the waves, coral reefs stretch for miles along an underwater mountain chain.

It’s a paradise. At least it was before the heat wave.

When I first explored the Chagos Archipelago 15 years ago, the underwater view was incredible. Schools of brilliantly colored fish in blues, yellows and oranges darted among the corals of a vast, healthy reef system. Sharks and other large predators swam overhead. Because the archipelago is so remote and sits in one of the largest marine protected areas on the planet, it has been sheltered from industrial fishing fleets and other activities that can harm the coastal environment.

But it can’t be protected from climate change.

In 2015, a marine heat wave struck, harming coral reefs worldwide. I’m a marine biologist at the University of Miami’s Rosenstiel School of Marine and Atmospheric Science, and I was with a team of researchers on a 10-year global expedition to map the world’s reefs, led by the Khaled bin Sultan Living Oceans Foundation. We were wrapping up our work in the Chagos Archipelago at the time. Our report on the state of the reefs there was just published in spring 2021.

As the water temperature rose, the corals began to bleach. To the untrained eye, the scene would have looked fantastic. When the water heats up, corals become stressed and they expel the tiny algae called dinoflagellates that live in their tissue. Bleaching isn’t as simple as going from a living coral to a bleached white one, though. After they expel the algae, the corals turn fluorescent pinks and blues and yellows as they produce chemicals to protect themselves from the Sun’s harmful rays. The entire reef was turning psychedelic colors. 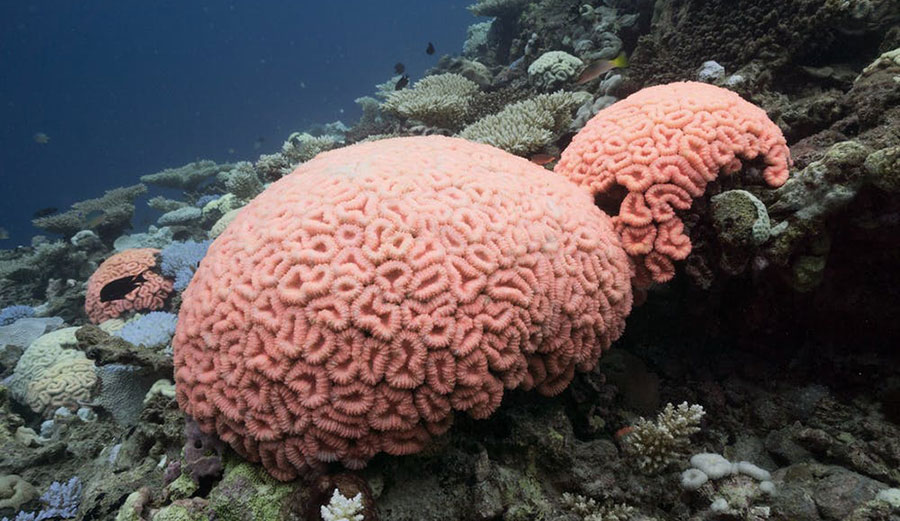 That explosion of color is rare, and it doesn’t last long. Over the following week, we watched the corals turn white and start to die. It wasn’t just small pieces of the reef that were bleaching – it was happening across hundreds of square miles.

What most people think of as a coral reef is actually many tiny colonial polyps that build calcium carbonate skeletons. With their algae gone, the coral polyps could still feed by plucking morsels out of the water, but their metabolism slows without the algae, which provide more nutrients through photosynthesis. They were left desperately weakened and more vulnerable to diseases. We could see diseases taking hold, and that’s what finished them off.

We were witnessing the death of a reef.

The devastation of the Chagos Reef wasn’t happening in isolation.

Over the past century, sea surface temperatures have risen by an average of about 0.13 degrees Celsius (0.23 F) per decade as the oceans absorb the vast majority of greenhouse gas emissions from human activities, largely from the burning of fossil fuels. The temperature increase and changing ocean chemistry affects sea life of all kinds, from deteriorating the shells of oysters and tiny pteropods, an essential part of the food chain, to causing fish populations to migrate to cooler water.

Corals can become stressed when temperatures around them rise just 1 C (1.8 F) above their tolerance level. With water temperature elevated from global warming, even a minor heat wave can become devastating.

In 2015, the ocean heat from a strong El Niño event triggered the mass bleaching in the Chagos reefs and around the world. It was the third global bleaching on record, following events in 1998 and 2010.

Bleaching doesn’t just affect the corals. Entire reef systems and the fish that feed, spawn and live among the coral branches suffer. One study of reefs around Papua New Guinea in the southwest Pacific found that about 75 percent of the reef fish species declined after the 1998 bleaching. Many of those species declined by more than half.

Research shows marine heat waves are now about 20 times more likely than they were just four decades ago, and they tend to be hotter and last longer. We’re at the point now that some places in the world are anticipating coral bleaching every couple of years.

That increasing frequency of heat waves is a death knell for reefs. They don’t have time to recover before they get hit again.

Where We Saw Signs of Hope

During the Global Reef Expedition, we visited over 1,000 reefs around the world. Our mission was to conduct standardized surveys to assess the state of the reefs. We also mapped the reefs in detail so scientists could document and hopefully respond to changes in the future. With that knowledge, countries can plan more effectively to protect the reefs, important national resources, providing hundreds of billions of dollars a year in economic value while also protecting coastlines from waves and storms.

We saw damage almost everywhere, from the Bahamas to the Great Barrier Reef.

Some reefs are able to survive heat waves better than others. Cooler, stronger currents, and even storms and cloudier areas can help prevent heat building up. But the global trend is not promising. The world has already lost 30 percent to 50 percent of its reefs in the last 40 years. Scientists have warned that most of the remaining reefs could be gone within decades. 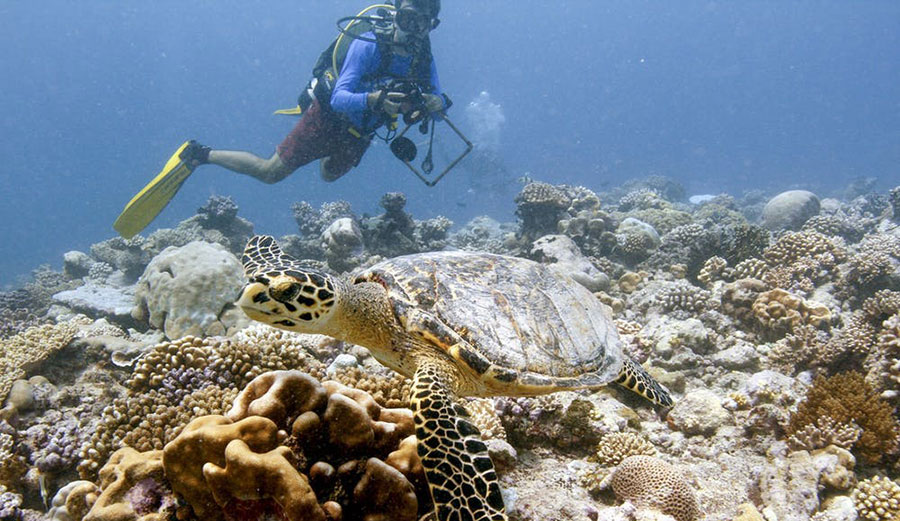 While we see some evidence that certain marine species are moving to cooler waters as the planet warms, a reef takes thousands of years to establish and grow, and it is limited by geography.

In the areas where we saw glimmers of hope, it was mostly due to good management. When a region can control other harmful human factors – such as overfishing, extensive coastal development, pollution and runoff – the reefs are healthier and better able to handle the global pressures from climate change.

Establishing large marine protected areas is one of the most effective ways I’ve seen to protect coral reefs because it limits those other harms.

The Chagos marine protected area covers  250,000 square miles with only one island currently inhabited – Diego Garcia, which houses a U.S. military base. The British government, which created the marine protected area in 2010, has been under pressure to turn over control of the region to the country of Mauritius. That’s where former Chagos residents now live and which won a challenge over it in the International Court of Justice in 2020. Whatever happens with jurisdiction, the region would benefit from maintaining a high level of marine protection.

A Warning for Other Ecosystems

The Chagos reefs could potentially recover – if they are spared from more heat waves. Even a 10 percent recovery would make the reefs stronger for when the next bleaching occurs. But recovery of a reef is measured in decades, not years.

So far, research missions that have returned to the Chagos reefs have found only meager recovery, if any at all.

We knew the reefs weren’t doing well under the insidious march of climate change in 2011, when the global reef expedition started. But it’s nothing like the intensity of worry we have now in 2021.

Coral reefs are the canary in the coal mine. Humans have collapsed other ecosystems before through overfishing, overhunting and development, but this is the first unequivocally tied to climate change. It’s a harbinger of what can happen to other ecosystems as they reach their survival thresholds.