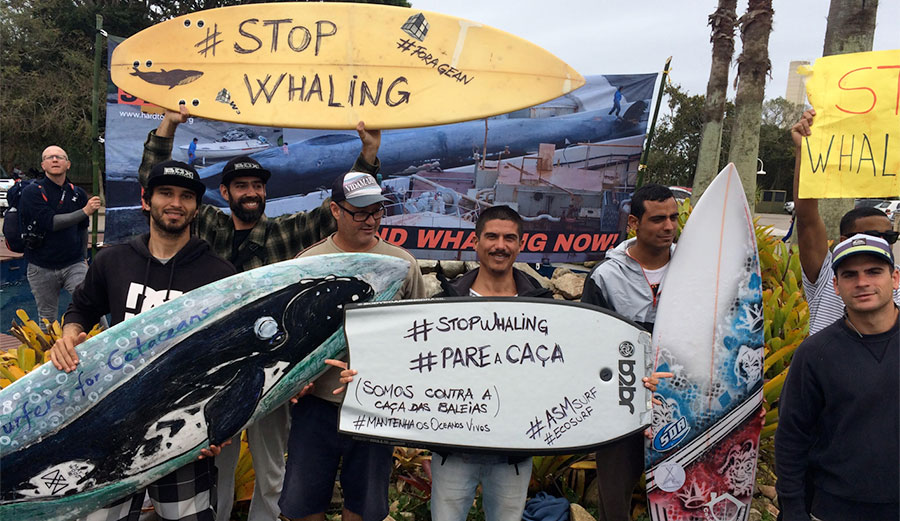 The International Whaling Commission is a moment to look back at our industrialized brutality towards the ocean’s most majestic creatures, and to decide whether to learn from those crimes against ecology or not. We know we can do better, but will we?” Image: Supplied

The International Whaling Commission is not something that’s traditionally been on the surfing world’s radar. Considering the fact that as surfers we are shoulder-to-shoulder with cetaceans (all whales, dolphins, and porpoises) in lineups all around the world, that’s a shame. We share that interspecies joy of riding waves together—something that is hard to find a parallel for in any other human and non-human animal relationship. I haven’t seen any bushmen running alongside wild lions, stoked on how good it feels to simply run fast downhill, have you?

A five-day IWC plenary meeting ended on September 14th in Florianopolis, Brazil. Set up in 1946, the IWC’s mission is to “provide for the proper conservation of whale stocks and thus make possible the orderly development of the whaling industry.” In 1982, the IWC adopted a moratorium on commercial whaling, due to the decimation of whale species from industrialized whaling. All countries participating in the kills stopped the slaughter, except Russia and Japan who slip through a “scientific whaling” loophole, and Iceland and Norway who simply do not observe the international call for cetacean protection.

Japan, Iceland, and Norway typically petition the commission to expand “scientific” kill quotas and even re-legalize commercial whaling, dragging with them small countries they may have coerced into voting in support of such backward thinking. The meetings contain observations from countries who want to resume commercial whaling and will display very flimsy science aimed at such an end. Credible scientific studies from pro-conservation countries will be presented in opposition, and then lunch happens, or one of the many other breaks that always seem to pop up. When the meeting resumes, the loop begins again and a lot of the time not a hell of a lot gets done. It’s a big, slow boat to try and move.

Every IWC meeting, however, has a moment where common sense wisdom is shared. This year it came from Brazilian Governmental Minister Edson Duarte. “The world recognizes the urgent need to respond to the challenges posed by the current model of economic development,” he said. “The time has come to act in the IWC in a convergent way so that this forum can also present a joint vision regarding the conservation and management of the marine environment.”

Duarte went on to talk about the numerous other challenges the marine ecosystem is facing. “It is time for progress, not setbacks,” he explained. “The oceans are the major carbon sinks; however, they are also under threat from climate change. Scientists point out that the coming years will be even hotter, bringing new ingredients to the universal climatic scene and putting the entire marine ecosystem at risk. In the face of this, worldwide concern for the sustainability of marine biodiversity grows. Whales, as well as dolphins, still suffer from problems such as bycatch, anthropogenic underwater noise, ships strikes, and the huge amount of marine debris and plastic in the seas. These are increasing challenges that demand a broader conservation agenda.”

Brazil has a vast coastline, which makes the country a key player in the fight for cetaceans and the environment.
“With approximately 7,500 kilometers of coastline in the Atlantic Ocean, Brazil plays a fundamental role in facing the multiple challenges posed by coastal and marine management,” Duarte said. “With the expressive support of civil society organizations, the government of President Michel Temer has recently made the decision to create four conservation units in two oceanic archipelagos that have an incalculable wealth of biodiversity. With the creation of these 90-million-hectare conservation units with an area equivalent to the combined territories of France and Germany, Brazil significantly increased the percentage of its protected areas in its coastal-marine zone from 1.5% to 26%.”

The South Atlantic Whale Sanctuary that Minister Duarte is referring to has already been voted against by the whaling nations from the northern hemisphere, and reports from local surfers say that foreign fishery representatives have been visiting fishing villages throughout Brazil trying to persuade locals to hunt whales again and fully exploit the marine wildlife that still thrive in local waters.

It’s common to see a town that clings to old dying practices like commercial industrial whaling and fishing losing their future. The wildlife is disappearing and with it the ability to make a reasonable catch. The logic in all of us knows we have a broken system that is leading to collapse.

From that logic, we can look to alternatives that keep us on the coast, diving and in our boats, away from terrestrial lives we know are not for us. We can look to the Azores Islands, Australia, New Zealand, and many other countries where whale watching operators who were once whalers are now running booming family businesses. Every year the whales are not hunted, their populations increase. And as their populations increase, so too do encounters for the happy whale watchers. Globally, whale watching is a multi-billion-dollar industry that is growing by 10 percent each year. Whaling operations in places where whaling is still practiced run at such a crippling loss that government subsidization is needed to keep companies afloat. Rightfully, an attempt to bring back commercial whaling operations was defeated at the IWC on Friday. Still, however, the scientific loophole exploited by Japan exists, and the blatant disregard for the moratorium continues in Norway and Iceland.

The economic argument is not the sole reason for protecting cetaceans. This is a global loss. It doesn’t feel right. It doesn’t feel like the best we can do. It feels like we have missed out when we hear our grandparents talk about how they would surf the reef and then dive for abalone to cook up, or watch in awe as great schools of sardine would black out the water and whales would frequent the coves in winter to give birth to their calves. It doesn’t feel right that we might be the ones telling our kids how we saw the last whales in the channels or the last super pods of dolphins.

The International Whaling Commission provides a brief but crucial moment when countries’ environmental representatives gather to review and discuss cetaceans. It’s a moment to look back at our industrialized brutality towards the ocean’s most majestic creatures, and to decide whether to learn from those crimes against ecology or not. We know we can do better, but will we?