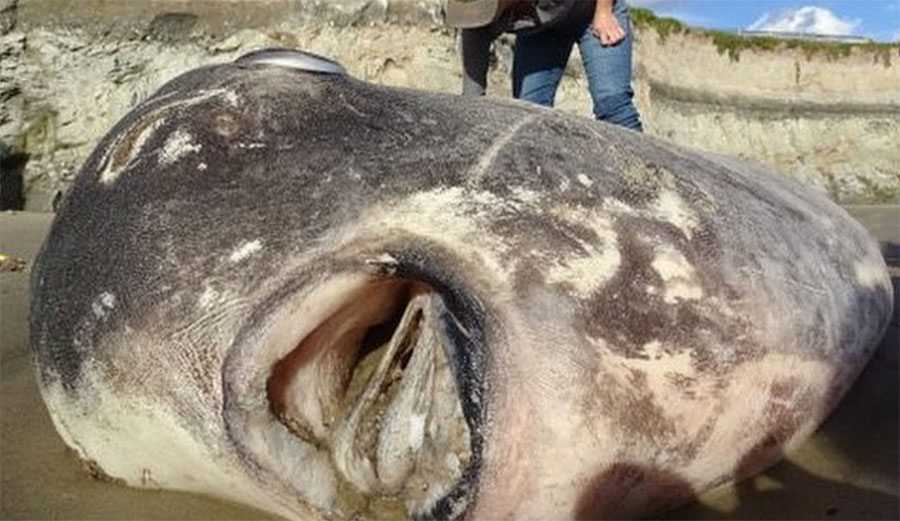 There’s a good chance you’ve heard at least a bit of news about the hoodwinker sunfish. It’s an enormous fish that, strangely, was only discovered in 2017. And on February 19, one washed up in an unexpected place: Sands Beach in Santa Barbara.

The 2017 discovery of the hoodwinker sunfish does come with something of a caveat. We’ve known about sunfish for a long time—it’s just that we thought there were only three different species of them, Masturus lanceolatus, Mola mola, and Mola ramsayi. Then, an Australian Ph.D. student named Marianne Nyegaard came along. She and a team of researchers looked at the DNA of more than 150 sunfish samples and found something weird: hidden among those samples was a fourth distinct species that had been there all along, hoodwinking everyone. She named it the hoodwinker sunfish, or Mola tecta.

“…when I began my Ph.D. doing population studies on sunfish off Bali in Indonesia, I didn’t expect to discover an entirely new species,” Nyegaard wrote for The Conversation. “What began as something of a side project turned into a four-year treasure hunt, flying thousands of kilometers to track down evidence with the help of dozens of people.”

These extraordinarily rare fish have never been seen north of the equator, so finding a dead one in the sand in Santa Barbara confounded just about everyone. The 7-foot creature was first thought to be a plain old mola mola sunfish, which are regulars in the Santa Barbara Channel, but a conservation specialist named Jessica Nielson had a sneaking suspicion that something was a little… off. She took photos of it, then put them up on a Facebook page, which led Thomas Turner, an associate professor of ecology, evolution, and marine biology, to go and have a closer look. He then put a few more images on iNaturalist, an online community for citizen scientists, and lo and behold, our old friend Marianne Nyegaard laid eyes on them.

Although she is probably the world’s foremost expert on the strange fish, she couldn’t be sure it was one. “I thought that the fish surely looked an awful lot like a hoodwinker, but frustratingly, none of the many photos showed the clavus (a diagnostic feature) clearly,” Nyegaard explained in an email to Shelly Leachman, a writer for The Current, a UC Santa Barbara publication. “And with a fish so far out of range, I was extremely reluctant to call it a hoodwinker without clear and unambiguous evidence of its identity.”

Nyegaard emailed with Ralph Foster, an ichthyologist at the South Australian Museum, to try and get a conclusive answer.  “I emailed a bit with Ralph, and we discussed how this fish would have been a dead-set hoodwinker had it been within range in the temperate Southern Hemisphere,” Nyegaard continued. “But I felt I needed to be absolutely 100 percent sure before settling on an ID, seeing as I had described the hoodwinker and would need to back up my ID with absolute certainty with a specimen so far away from home.”

They wrote back to Nielson and Turner, asking them to take a few samples for DNA analysis and a few more photos, which they were more than happy to do. “This is certainly the most remarkable organism I have seen wash up on the beach in my four years at the reserve,” said Nielsen to The Current. “It really was exciting to collect the photos and samples knowing that it could potentially be such an extraordinary sighting.”

They sent the samples and images back to Nyegaard and Ralph Foster, who were able to confirm that the dead fish on the beach in Santa Barbara was, indeed, a hoodwinker sunfish.  “There was just no doubt of the ID,” Nyegaard wrote before expressing wonderment at how the confirmation all came together. “Eyes and ears and hands on the ground half a world away — wow.”

While the mystery of how the hoodwinker sunfish ended up in Santa Barbara is still unsolved, the identification alone is another step in learning more about this rare and amazing species.