Scientists at the University of Hawaii, Manoa Predict 90% of Coral Reefs Will Disappear By 2100 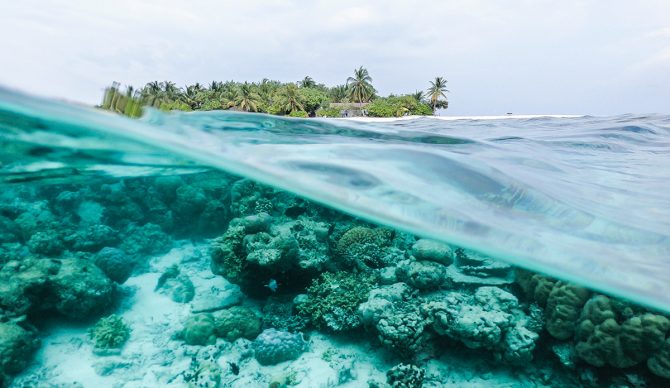 Type “ocean” into a Google News search and it’ll take a total of .3 seconds to wonder if the world is headed to a crumbling end any day now. I know this because I do this almost daily, but I’m still not sure if it’s a form of masochism or a need to be informed. Either way, it seems, I’m now more sure than ever scientists need a way to articulate to the common man the rate to which the ocean is warming.

“Nuclear explosions!” one of them shouted, probably with a cartoon lightbulb firing off above his head (I jest, of course). “We’ll figure out how hot the seven seas are getting and tell them however many number of nukes we’d need to drop in order to match that…PER SECOND.”

Sounds ridiculous. And frightening. But that’s how scientists actually described it. It seems to make sense.

In 2019, the number was 1.5 atomic bomb blasts per second, the ocean was heating that fast. Then Planet Earth celebrated the roaring twenties by learning it’s been upped to five per second by the scientific community. So you get the picture, the ocean is getting warmer, we’re all puking more trash into it, animals are dying, waves will disappear, and the list goes on. Admittedly, while it’s all serious stuff, the saturation of these equivalencies, deadlines, and body counts make it tough to wrap a detached human mind around the significance of it all.

The latest doomsday scenario is another heavy one. Worst case, coral reef habitats will be almost completely wiped out by the turn of the century.

Researchers at the University of Hawaii Manoa learned this in their work to combat coral bleaching. By transplanting lab-grown live corals into natural reef environments, existing damaged corals can begin to recover. It’s a now-popular method of ocean conservation that looks both simple and complex but makes perfect sense in theory. Maui-raised big wave surfer-turned med student Torsten Durkan once championed a winter-long fundraiser to help this exact cause, with the money raised being donated to UH’s Dr. Ruth Gates, who’d been conducting this exact research on a tiny island off the coast of Oahu.

Logically, the next step after growing the live corals would be to research and understand exactly where they have the best opportunity of reviving reef environments. They set out to map parts of the world that the new corals could thrive, and this is where researchers at the University of Hawaii Manoa learned there are a very limited number of options.

“By 2100, it’s looking quite grim,” said Renee Setter, a biogeographer at the University of Hawaii Manoa, presenting that “few to zero” suitable places will be left where healthy corals can be introduced to the natural environment. “Trying to clean up the beaches is great and trying to combat pollution is fantastic. We need to continue those efforts. But at the end of the day, fighting climate change is really what we need to be advocating for in order to protect corals and avoid compounded stressors.”

The warmer surface temps associated with climate change mean more acidic waters, bleaching the corals themselves and putting them at a higher risk of dying. Taking into account changing rates of sea surface temperature, wave energy, the acidity of the water, pollution, and overfishing in areas where corals now exist, they predict a hefty portion of the ocean will be unfit for introducing healthy corals by 2045. By 2100, they believe anywhere from 70 to 90 percent of existing coral reef environments may already be wiped out entirely.