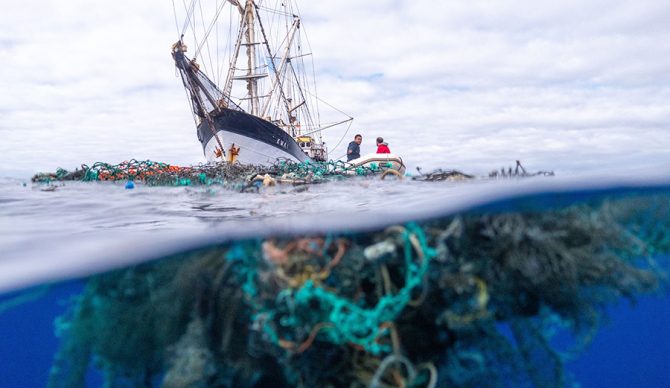 There’s a watch in there somewhere… Photo: Ocean Voyages Institute

Boardshorts, sandals, running shoes, the list goes on. You name it, somebody is finding ways to turn plastic that would otherwise be floating in the ocean into a fashionable item. Considering the prominence of plastic pollution in the ocean, it’s been a positive movement to watch and support over the years. Everything from straws to bags are broken to microscopic levels over time, eventually working their way back into our very own food chain. All this on top of the fact that the 5.25 trillion macro and micro pieces of plastic and 46,000 pieces in every square mile of ocean effectively kill and disrupt any marine life living there. So when it’s all said and done, using plastic sourced from the literal piles of trash in the sea for stuff humans wear helps us clean up the problem as much as it raises awareness to it.

Add luxury watches to the list of things created from ocean pollution-sourced plastic now. This week, the former creative director at Gucci and Yves Saint Laurent turned luxury brand designer Tom Ford announced his label will roll out a line of watches made entirely from recycled ocean plastics.

“In my opinion, ethical luxury is the greatest luxury of all”, Ford said in a statement. “It is incredibly appealing to know that you are not only wearing a high-quality product, but by simply owning the product you are also taking direct action to improve the planet.”

The equivalent of 35 plastic bottles from the ocean is used to make each watch, which is impressive if they can sell watches on the scale of Adidas’ Parley for the Oceans initiative — an effort that started in 2015 and grew from selling one million pairs of running shoes in 2017 to netting $1 Billion in sales by the end of 2018, then vowing to make 11 million pairs of eco-friendly shoes in 2019, all using yarns and filaments recycled from trash found in the sea and illegal deep-sea gill nets. Ford calculated that every 1,000 watches produced and sold will equate to removing 490 pounds of plastic waste from the ocean and landfills. Consistent with the cause, the company said they will also use carbon-neutral transportation, solar energy, and recyclable packaging in the manufacturing of their new timepieces.