Wind Turbines Are a Promising Source for Sustainable Energy, But Some Threaten Surf Spots 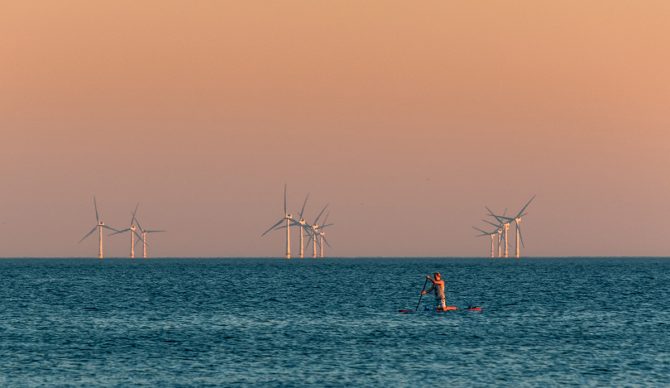 The connection between the ocean and our pursuit of developing sustainable energy sources is strong. From protecting the environment to utilizing the ocean as a key element in developing sustainable energy, surfing will continue to be impacted by its evolution. There are efforts to capture renewable energy by using the power of waves on Maui, for example, with some hoping to make the island operate entirely on clean energy.

On the opposite end of the spectrum, we sometimes see surfing fall victim to environmental mishaps. In 2019, the South African city of Durban was faced with a huge sewage spill leading to a ban of basically any water sports. This didn’t come as a surprise, given the fact that as many as 190,000 gallons of raw sewage were pouring into the Port of Durban per hour. Due to safety concerns, the WSL was left with no other option than to cancel the planned Zigzag Durban Surf Pro. A similar event — where a ship loaded with both diesel and oil ran aground on a coral reef — happened just off the coast of Mauritius last year and surfers from all over the world were asked to sign an open letter addressed to the company responsible for the spill.

It wouldn’t feel right to claim that these companies would harm the oceans and their users on purpose – accidents have huge financial consequences – but it’s inevitable that these disasters are a direct result of human failure.

One solution for clean energy that doesn’t involve oil or fossil fuels, many believe, lies in wind turbines. But ironically, wind turbines can endanger surf spots. Turbines are a great way to generate electricity and one country taking the lead in this realm is Scotland, which saw as much as 98 percent of its total energy consumption produced by wind in 2018. However, any country planning to install wind turbines on or around its coastline should take into account all parties involved, including the people using the beaches for leisure and sports.

In the Netherlands, for example, where I’m from, developments have impacted some of the country’s best surf spots. Around the coastline of the Maasvlakte 2 (a major civil-engineering project), wind turbines are set to be installed — many of which will be placed in the North Sea. The Maasvlakte 2 belongs to the Port of Rotterdam and is situated just south of the country’s most popular surf beach, Scheveningen.

“Several plans have been made to create as many as 22 wind turbines on and off the shore of the plain,” the Holland Surf Association wrote in a statement. “Twelve of these would even be placed around the shoreline, which would obviously not be favorable to the surfing conditions, as well as the safety of the surfers – not at all.”

Through a claim, lead by the Holland Surfing Association, the parties involved with the construction of this project are accused of taking only their self-interest into account when planning the project. Simply put, the HSA argues that the site chosen to install these turbines will present an obvious safety concern for any recreation in the area.

Let’s hope that more news on this case will follow in the coming weeks and that one of the best surf spots of the Netherlands can remain unharmed, with safe conditions for surfers of all levels.

Editor’s Note: Olmo van Beurden is a writer and surf guide from Amsterdam who hopes to raise awareness with this piece.