How Snowboarding Is Reconnecting With Its Surf-Inspired Roots

And why that's good for the sport.

I had never looked at untracked corduroy this way before. The weather at Mammoth Mountain was a crisp 50 degrees. The skies, a stunning shade of blue. And a tiny corner of the resort was absolutely quiet save the wheels of the chair lift spinning above my head and the satisfying crunch of my board’s toe edge laying into the hardpack.

I reached a wide-open clearing in a run, checked a quick heel turn, and before I knew it I was rocking back to my toes with my entire forearm dragging against the corduroy ridges of the low-aspect, low-consequence groomer. My legs straightened and my chest and waist hovered a few inches above the ground as I tried to emulate the approach of all the videos I’d seen of late. I rebounded back to center, straightened upright, checked another heel turn that kicked up a cloud of snow into my goggles. I cracked a smile.

In that moment I felt like I’d found everything I wanted snowboarding to be – a unique feeling but so very similar to the mechanics of surfing that have become second nature to me. A breeze whistled through the pines and hemlocks as I popped over a natural little transition and scoped out my next turn.

Across ski resorts in North America, it’s not uncommon to spot snowboards in the lift line that are major departures from the twin tip template that’s dominated the sport over the past several decades. Such designs purportedly unlock the ability to explore a “surfier” feeling on the mountain.

As it happens, principals of surfboard design have a lot to offer snowboarding and have since the sport’s inception. But, modern efforts to re-engage with snowboarding’s roots are fundamentally reshaping design theories and culture as more and more riders reject the typical skate-inspired approach for a more surf-inspired one. 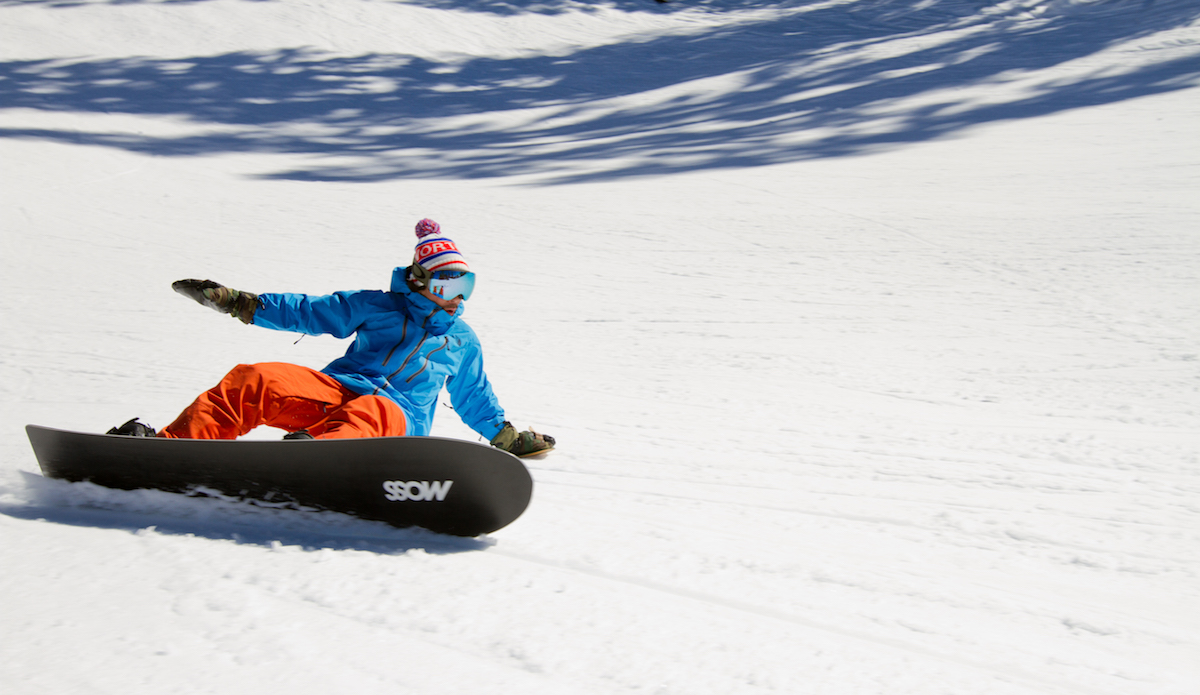 Japan and the History of “Snowsurfing”

Modern snowboarding, like every other board sport for that matter, can quite clearly trace its roots back to surfing. Indeed, the wildly popular Snurfer, a composite of “snow” and “surfer,” created in 1965, influenced the likes of Jake Burton Carpenter and Tom Sims to go into business for themselves.

But, while snowboarding’s forefathers in the U.S. and elsewhere were hard at work improving the Snurfer design in the sport’s infancy, Shinzo Tanuma was quietly toiling away in Japan with a design aimed to best emulate the feeling of surfing on the mountain. In 1971, Shinzo created his first prototype and eight years later he founded Moss Snowstick – the first snowsurfing company. That DNA has persisted since the company’s founding.

“Everything we do comes from surfing,” says Gosei Mouri, Moss Snowstick’s man in North America. “(We’re) trying to replicate surfing on the mountain.”

From the late seventies through the eighties, snowboarding took a different trajectory in the U.S. than it did in Japan. Tom Sims and Mike Chantry famously organized snowboarding’s first halfpipe contest in 1983 in Soda Springs, California that would cement the nascent sport’s relationship to the trick-centric world of skateboarding, especially in North America, for decades to come.

Meanwhile, over in Japan Moss founded the Japan Snow Surfing Association in 1982 and organized contests across the country throughout the eighties but by the latter part of that decade into the early nineties, the snowsurfing approach developing in Japan was eclipsed by the skate-inspired approach gaining traction across the globe. And only a small sliver of riders – particularly those venturing into the backcountry – took to the strange swallowtail equipment Moss continued to push out.

One such person, Taro Tamai, was a team rider for Moss in the nineties, and in 1998 founded Gentemstick – a spin-off of Moss Snowstick. Taro is widely regarded as the visionary who took up the snowsurfing mantle that’s only just begun to percolate in snowboard culture in North America, Europe, and beyond lately. 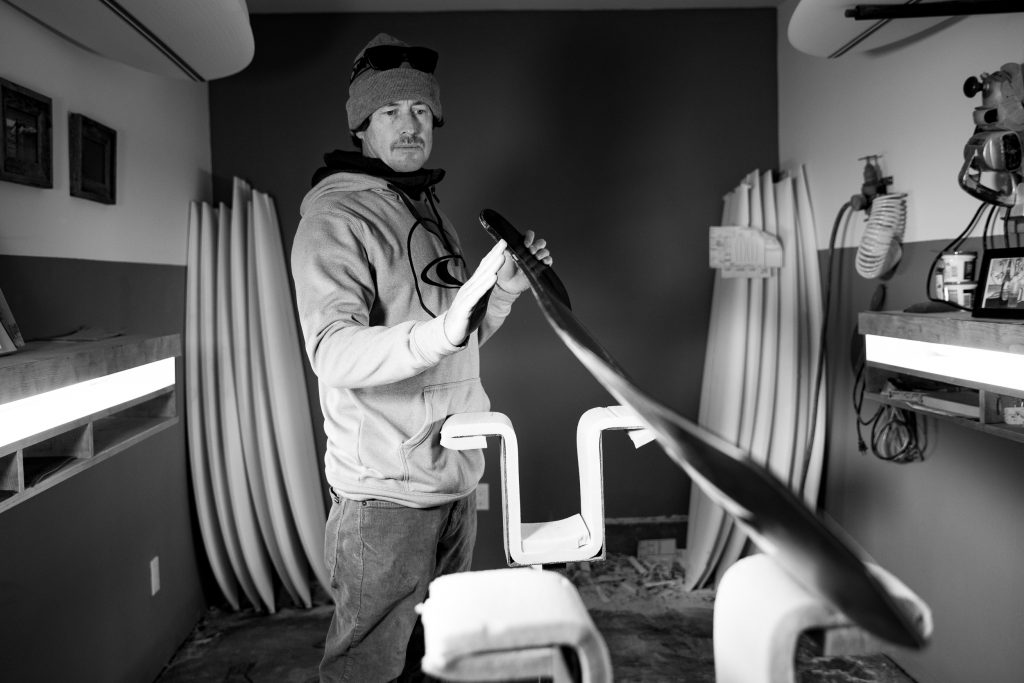 Chris Christenson has been part of this movement stateside for over a decade. Photo: Andrew Miller

It’s Taro’s influence, for instance, that’s at the heart of surfboard shaper Chris Christenson’s effort in recent years to create surf-inspired board designs for Jeremy Jones’ eponymous snowboard company. An avid snowboarder himself who often does some of his best work at his hideaway in the Eastern Sierras, Christenson told me the first time he realized the shortcomings of snowboarding’s infatuation with the twin tip design was on a trip to Japan.

“I have to give credit to Taro Tamai who owns Gentemstick because he was the first guy that got me off the twin tip,” Christenson said. “I went to Hokkaido in 2006 and I got a Rocket Fish from Taro out of his Gentem shop… We got a pretty good bluebird powder day and I was blown away how good that board worked… That was the first time I really felt like I was surfing.”

Christenson’s partnership with Jones was the result of a friendship formed around snowboarding and surfing. Initially, Christenson told Jones to try a surfboard with a bottom contour he was confident would work well in powder. Then Jones asked him to make a rough prototype.

“He gave me a piece of wood and I bent it and shaped it and sent it back to him and he put surfboard wax on it and rode it in his backyard and was like, ‘Holy shit. This thing works.’ And I said, ‘Yeah, let’s put this on snowboards, man. It’s gonna work,'” Christenson told me.

Christenson later drove up to Jones’ house in Truckee and shaped out the molds that would later evolve into Jones Snowboards’ Surf Series line. When Jones rode the first iteration of the Storm Chaser model, he told Christenson it was the best powder board he’d ridden in his life.

Like Christenson, Aaron Lebowitz of Elevated Surf Craft also draws inspiration from Moss and Gentemstick and is seeking to take lessons from functional surfboard designs and apply them to snowboards.

Lebowitz aims to “see the mountain as extended waves; rights and lefts – drops, sections, barrels, shoulders, and closeouts.” And instead of a traditional skate-inspired approach aimed at lapping the park or bombing a hill, he said snowboarders are slowly opening up to using the natural features available to them and “co-authoring” a run with the mountain by reading those conditions and flowing down the hill.

A key characteristic of the trend toward achieving a “surfier” feeling on the mountain is that many snowboarders today actually own a diverse quiver. Whereas in past decades there was little variation between board models and brands except for maybe flex patterns, rocker, and camber, now there are countless options available to riders to dial in their equipment for the mountain they’re riding and the conditions of any given day. 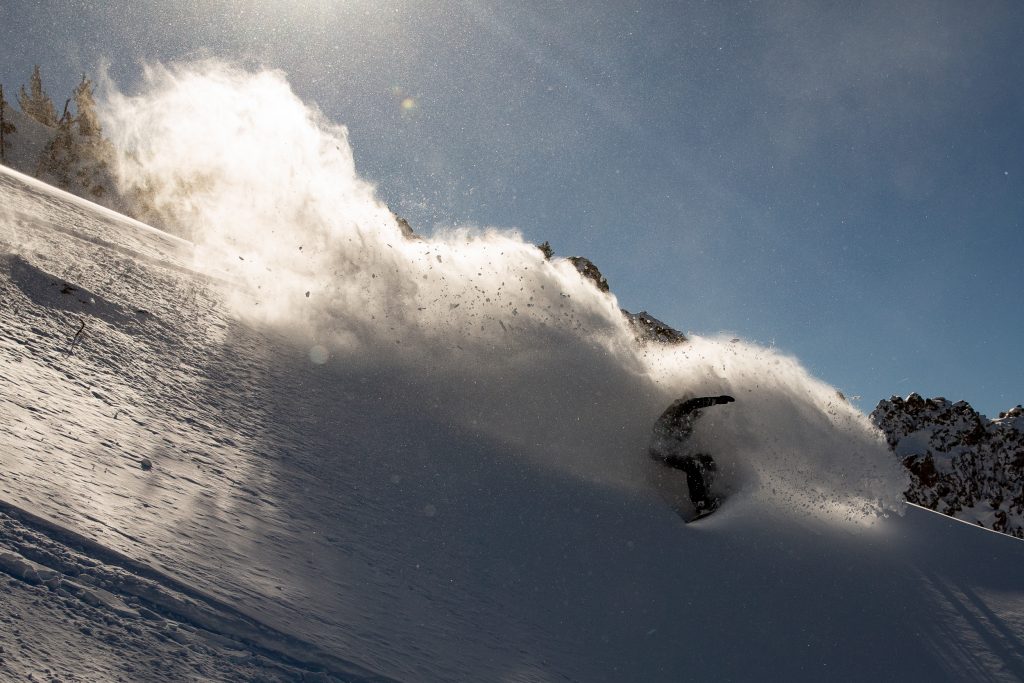 Testing grounds: Christenson, with a frontside hack near his Sierra home. Photo: Miller

A resort like Mt. Bachelor, that’s lower aspect with a lot of wind lips requires a board with different capabilities than, say, Jackson Hole that’s got plenty of steep sections, Lebowitz explained to me. When I mentioned that I’d often heard the idea of a quiver compared to a bag of golf clubs, he agreed. “Twin tips are like your five iron,” he said. “They could do everything, but they don’t do any one thing really well.” Lebowitz believes discerning riders are slowly opening up to the idea of building out their quiver.

“With surfboards, everything became quiver based,” said Chris Christenson. “And for people that are passionate (about snowboarding), I’m talking at least more than 30 days a year on snow, it’s becoming quiver based, too.”

“Fifteen years ago I had one board in my quiver, maybe two,” Christenson continued. “Now, in any given season I’m riding anywhere from nine to 12 different models, just like I would in surfing, depending on conditions or mood.”

Accessibility and a Maturing Sport?

Compared to skate-inspired snowboarding, every person I spoke to acknowledged that a surfy approach – a focus on turning and carving with style and flow – is much more accessible to the typical rider than halfpipe and park, which could in part explain the trend.

“Maybe what we’re seeing on T.V. and in films in skateboarding, snowboarding, and surfing may be the biggest and most thrill-seeking, but I think there’s kind of been this return to what it all came from and this feeling of sliding sideways and finding transition,” said Dave Marx, marketing manager at Venice, California-based Arbor Snowboards.

Both Marx and Gosei explained that the growing “surfy” trend may also have something to do with a maturing sport – people that have ridden since the beginning and are looking for new ways to ride that are arguably lower risk while still having fun.

“Our generation – and when I say our generation I mean thirty-years-old and up – we’ve done skateboarding style (snowboarding) in the past,” said Gosei. “And a lot of people lost interest… But I found snow surfing style – and it’s all about carving.”

To Christenson, an aging demographic may have something to do with surf-inspired riding gaining popularity, but it’s not regressive.

“It’s not moving backward,” Christenson told me. “This isn’t retro at all. It’s all progression… I’m forty-six right now and I feel like my snowboarding is still progressing.”