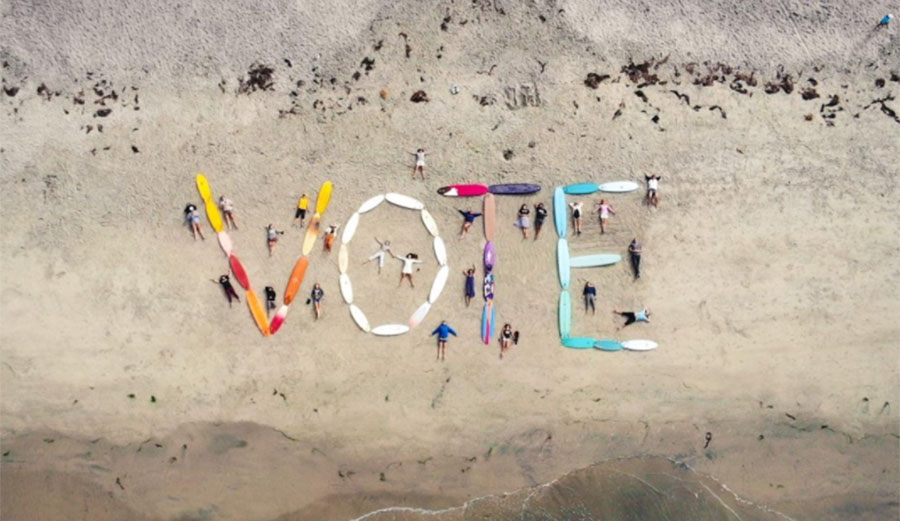 Vote like your life depends on it. Because a lot of lives do. Photo: Changing Tides/Blue Uprising

The surfing world wouldn’t be what it is without the father of modern surfing, three-time gold medal Olympian and legendary Hawaiian waterman, Duke Kahanamoku. It was his gold medals for freestyle swimming that launched his worldwide fame and launched surfing into the cultural spotlight. And Duke would have wanted you to vote.

We can credit this same legendary man for bringing surfing to the Olympics, which was supposed to debut at the 2020 Summer Olympics in Japan. Duke, along with many other great watermen and women, brought new ways of thinking and being to the world: a deeper connection to the waves, the water, and ourselves.

While we’ll have to wait for another Olympic swell to come our way to finally see Duke’s vision come to life at the Olympics, we don’t have to wait to see that same type of inclusive and inspirational vision come to fruition in our country. We still have the opportunity to live by that same code of values that Kahanamoku embodied in his life: humility, connection to nature, sportsmanship, and deep care for people, water, and land. Despite facing discrimination throughout his life, Duke never failed to remain dedicated to integrity and courage.

So here we are, facing a choice this November. It might seem like it has nothing to do with surfing, but as Duke has always shown us, surfing is about more than riding waves – it’s about living in connection with our values, our planet, and others. On election day, we jointly make decisions that impact our waves, our waters, and our spirits. I wish I could say that our decisions will impact our great-grandchildren and that we need to take action solely for them. Unfortunately, however, we’ve reached the stage where our selfish desires need to motivate us as well, rather than just a compassionate vision for future generations.

My father, who recently passed away, taught me how to surf in Ocean City, Maryland. Those teachings taught me almost everything I needed to know about life. I’ll avoid launching into another diatribe of how meaningful surfing is to me — if you’re here reading this, you know the impact that surfing can have in a person’s life.

For more than the last decade of my life, I’ve worked on campaigns. I’ve frequently found myself in political discussions at the most inappropriate moments: Thanksgiving, dental surgery, church – you know, all the winners. For most of my life, however, I kept politics out of surfing. Mostly because it made more sense to argue with my kitchen sink than with some kid living off his family’s money driving an F-250 proudly waving the confederate flag. I apologize for being combative, but at this point, I’m past the Michelle Obama vibe, “When they go low, we go high.” But if you are still in that five percent grey area where you like to tell your friends you are fiscally conservative and socially liberal, yep, you should come and join us.

So let’s get to the point: the ballot. Whether you want to talk about it in terms of climate change, the environment, pollutants, or just shoot the breeze about the ocean – we are facing dumpster fires like never before. Hurricanes, forest fires, rollbacks of important environmental regulations, coral reefs dying and destroying breaks, algae blooms, and rising ocean levels… this shit is real. You can literally go on Google Maps and see plastic floating in the ocean. Does anyone really think empowering oil industries and deregulation is going to do anything positive for our waters?

Trump stands on the wrong side of science. Whether it’s having the EPA rollback toxic air pollution regulations, green lighting seismic airgun blasts for oil and gas drilling, or pulling out of the Paris Climate accords, this dude clearly does not have a connection to nature and does not care about the ocean. He is the antithesis of people like Kahanamoku who inspire us, live in humility, and fight the good fight. Joe Biden offers a dramatically different vision. He supports banning offshore drilling (and not just when it would be convenient to his properties), rejoining the Paris Climate accord, and supports phasing out single-use plastics, among a million other common-sense ideas.

These environmental issues don’t exist in a silo. Communities of color are more likely to live in locations vulnerable to climate catastrophes and polluted by toxic waste (among other issues). Black people in America are more likely to die from exposure to small particle air pollution than the general population in America. In certain regions of the U.S., communities of color breathe significantly more vehicle pollution than whites. Black mothers are more exposed to high temperatures and air pollution and are more likely to have premature, underweight, or stillborn babies. Globally, environmental issues intersect with racial justice. They always have. Some of the regions most affected by climate change (small, developing island states and the least developed countries) have done the least to cause this crisis. From indigenous land rights and exploitation of resources, these are all massive problems. And, spoiler alert, Donald Trump does not have a history of caring about any of these issues.

So, I write this asking you not to declare some allegiance to democrats forever or rail against the evils of Republicans, or even dive deep into any specific points. I’m writing this to ask you to simply vote to put some sort of civility back into the White House. Or, if surfing is your main priority, I am asking you to protect our sport and its future. Let’s bring values like humility, civility, generosity, and caring for others back into this legendary sport and back into this country.