With the Coronavirus Officially a Pandemic, How Will the WSL and Its Athletes Approach 2020? 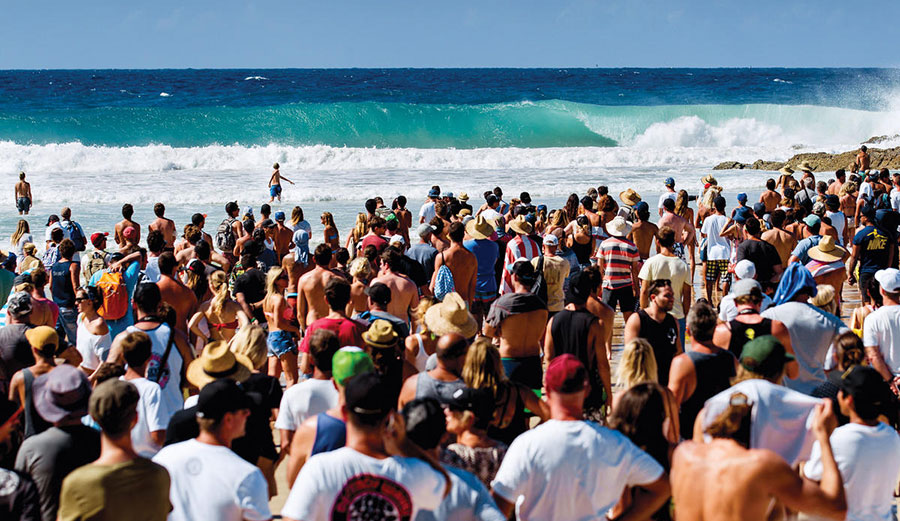 Large gatherings of people in the midst of a pandemic are a decidedly terrible idea. And the crowds at the Corona Open Gold Coast could be affected by the Coronavirus. Photo: WSL/Jimmicane

Coronavirus panic has infected the planet. On Tuesday, the World Health Organization officially declared a pandemic. With the start of the traveling circus that is the WSL Championship Tour just around the corner, I was curious to know if the athletes are concerned. I was also curious to know what, if anything, the World Surf League is doing to allay any of those concerns. In an extraordinarily ironic turn of events, the Gold Coast stop that kicks off on March 26th is sponsored by none other than Corona. That’s right, help yourself to a punchline. The Corona Open Gold Coast could fire the starter’s gun in the middle of a Coronavirus pandemic.

As of this reporting, nearly 120,000 cases of COVID-19 have been recorded in 114 countries and over 4,000 people have died. The entire country of Italy is under quarantine. On Wednesday, the Italian death toll leaped from 196 to 827. The CDC has advised against non-essential travel to China, Iran, South Korea, and Italy. Russia suspended flights to Italy, Germany, France, and Spain. India has suspended all tourist visas. The U.S. suspended travel from Europe. So one would be forgiven for not wanting to take a trip right now.

First, let’s hammer out some quick facts: Number one, you don’t need to be stockpiling toilet paper. If you’ve spent more than a hundred bucks on shit-tickets, you’ve wasted your money. If you’re truly worried, you could drop a hundred bucks on a bidet that will change your life. Second, if you’re young and healthy, you don’t have too much to be worried about. If you’re old and have a pre-existing lung condition, then maybe you ought to keep your hands to yourself and stay off the cruise ships. And yes, the regular old flu does kill many more people per year than COVID-19 — but looking at it like that is somewhat skewed. The important part isn’t how many people have died; it’s the death rate. Namely, the percentage of people with the infection that will die from it.

Depending on where you’re looking, the seasonal flu has a death rate of about 0.1 percent. Since researchers don’t know all that much about COVID-19 (it’s called novel Coronavirus for a reason), figuring out exactly what the death rate is for the Coronavirus is a difficult task. Human coronaviruses aren’t anything new. Researchers have known about them since the ’60s, and they’re responsible for such hits as MERS, SARS, and even the common cold. But this one, as the word novel implies, is a new strain. What is known for sure, though, is that with a death rate of anywhere from 1.4 percent to 4 percent, it’s a lot more dangerous than the seasonal flu.

According to the CDC, in the U.S. alone, the flu has caused an estimated 34 million illnesses, 350,000 hospitalizations, and 20,000 deaths this season. In a study published in China CDC Weekly, researchers found the death rate from COVID-19 to be around 2.3 percent in mainland China. With limited data, it appears to fluctuate pretty wildly depending on where it occurs. But the concern surrounding the Coronavirus isn’t how many people have died, it’s how many people could die if it continues to spread at the current rate.

That, of course, is why events all over the world are being canceled or postponed. Large gatherings of people in the midst of a pandemic are a decidedly terrible idea. Even if you’re young and healthy and don’t have much to worry about — likely to get sick and then simply get better — you could potentially pass it on to someone who isn’t as likely to get better.

The Olympics is considering shuttering the windows. The NBA has suspended the season. The Ivy League canceled its conference basketball tournament this week while the NCAA announced it would play its National Championship tournament without fans. A Coronavirus conference was canceled because of Coronavirus. Coachella has been pushed to October. SXSW was called off for the first time in 34 years. Tom Hanks and Rita Wilson both tested positive for it, and they’re in Australia. And, perhaps worst of all, Miley Cyrus recently announced that she isn’t doing her Australia tour. “Due to the recommendations of local, state, federal and international government authorities, including the Center for Disease Control,” the singer wrote on Twitter, “to reduce potential health risks in response to the current global health crisis, we are no longer traveling to Aus for the show.”

So with the CDC recommending that Miley skip Australia, the place where the WSL Tour is just about to travel to, what are the athletes thinking? They are, for the most part, putting their faith in the League.

“I think the WSL takes everything seriously and will continue to re-evaluate the situation as it unfolds,” Connor Coffin told The Inertia. “Personally, I feel okay about traveling to Australia as there hasn’t been a big outbreak yet, but there are some other stops that pose a higher risk. I haven’t spoken to too many of the other surfers but I would imagine having young kids at home would give you a different perspective.”

Strangely, as of this writing, although a handful of the athletes were willing to go on record, representatives from the WSL didn’t respond to repeated requests for comment, not even with a boilerplate media response. It did cancel two Qualifying Series events: the Central Japan open, which was scheduled for May 25 – 31, and the Krui Pro, scheduled for April 13-19. Their official approach to the 2020 season remains to be seen. Surely, they’re carefully considering their options and the safety of all stakeholders.

According to Tatiana Weston-Webb, the WSL is doing its due diligence. “Honestly, the WSL is going about standard precautions and canceling events that are in the affected zones,” she said, “so I think they’re doing a great job and warning/protecting us. We are all aware that when we travel there are millions of risks that take place, but for me, I’m taking care of being healthy with a strong immune system and being very sanitary (which is what the WSL is guiding us to do). I think, for now, they’re doing the best they can with the information the World Health Organization is providing them with.”

The waiting period of the Corona Open Gold Coast is a few weeks away, so timing is not good. The possibility of a cancelation still remains. Considering the Dream Tour is essentially a series of global flights over the course of a year, it’s highly vulnerable to the risks associated with a pandemic. The athletes and the extensive micro-economy of media, marketers, and officials traveling with the global production will have a significantly higher risk of exposure (and transmission to others) as 2020 unfolds. As other much larger events around the world get canceled or postponed, it begs the question: With a freshly unleashed global pandemic kicking off 2020, how far is the WSL willing to go to put “the world’s best surfers in the world’s best waves?”

Update: On March 12, the World Surf League announced it would cancel all events in March, including the Corona Open Gold Coast.