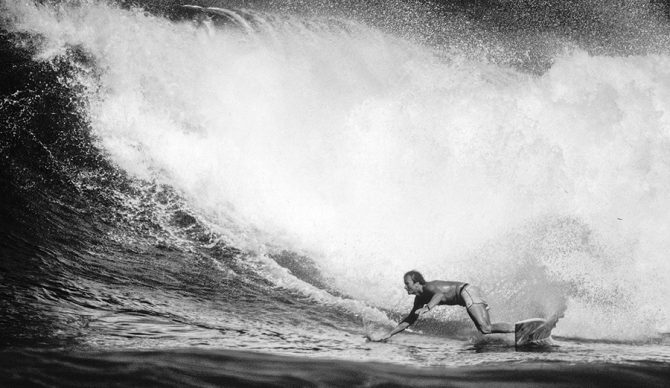 Editor’s Note: Welcome to Surf History 101, where we look at innovations in the world of surfing and beyond that changed the pursuit forever. In this edition, Sam George examines the thruster and how it altered surfing’s high performance landscape 40 years after the fact.

Arriving in Hawaii for the beginning of the 1980 North Shore contest season, Australia’s Simon Anderson moved into his rented Kuilima condo hefting three heavy board bags. One for his shorter “Rocky Point” boards, one stuffed with a collection of proper North Shore guns, and a third that contained several boards with a little something extra. Three somethings, to be exact: a trio of relatively small fins positioned near the tail in a triangular cluster, where on 99.9 percent of all other boards over 6’4”, only a single fin would be found.

Anderson, a top-10 pro and one of a handful who shaped and designed his own surfboards, had not brought these boards with a new fin configuration to surf in competition, nor even in front of the cameras, but merely to test-ride in Island waves, choosing a seldom-surfed break in nearby Kawela Bay, far from the limelight, to put them through their paces. After all, it was only months earlier that he’d built the prototype in his home waters of Narrabeen; this odd-looking setup wasn’t quite ready for prime time. But it would be soon. Because despite Simon’s confidence in this new configuration, not even he could have imagined that within 18 months his tri-fin “thruster” would be in use by virtually every other pro on tour, and within two years be the sport’s most popular surfboard fin design.

In 1980 there were basically two types of “short boards”: single-fins and twin-fins. The traditional single-fin still suited most surfers — a proven, all-around performer. The fast-turning twin-fin was an ideal small-wave board, which made it widely popular among competition surfers, both amateur and pro, with most surf contests of the day being held in what could euphemistically be called “average” beach break. But the speedy, super-loose twin did nothing for the 6’2”, 200-pound Simon Anderson, who, though only 26 at the time, and once rated as high as third on the IPS Tour, was finding it harder and harder to keep pace with his peers, most of whom were riding variations of the twin-fin designed by the current world champion, fellow Aussie Mark Richards. 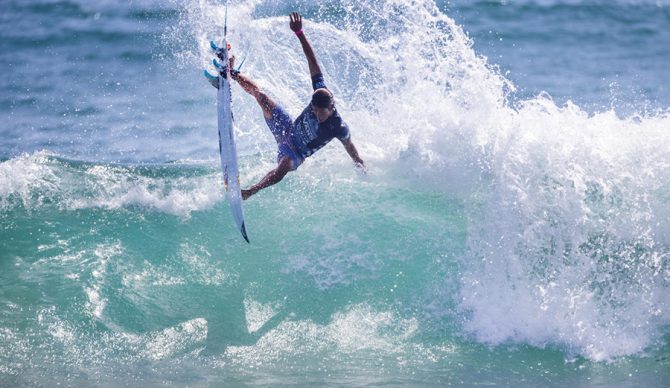 It’s difficult today, when professionals ride surfboards virtually indistinguishable from each other’s, varying only in minute increments of volume and contour, to fully appreciate the impact MR and his twin-fin had on competitive surfing. Imagine if Filipe Toledo showed up at the next World Tour event with a completely new board design that gave him a significant advantage over his competitors, then went on to win four consecutive world titles. This was the atmosphere Simon Anderson was operating in when, after several years of half-hearted competitive efforts, but plenty of time spent in his Energy Surfboards shaping bay, he decided to give the pro tour one more go-round, but this time with something new under his feet, a new design that might level the playing field to the advantage of heavy-heeled power surfers such as he.

The main point of inspiration came from fellow Narrabeen board-builder Frank Williams who, working out of Anderson’s factory, had been modifying his twin-fins with a third, much smaller trailing fin positioned along the stringer. The object being to take advantage of the twin-fins’ speed and quick turning characteristics while reducing its tendency to skid when real power was applied.

The idea of a tri-fin surfboard wasn’t exactly new. A 1972 issue of SURFER magazine included a feature titled, “One + Two = Free,” examining a three-fin design collaboration between Hawaiian super-stylist Reno Abellira and shaping guru Dick Brewer (below).“The tri-fin has single-fin drive and twin-fin torque,” asserted the surprisingly prescient Abellira. “It is a compromise of each with eliminations of hang-ups.” 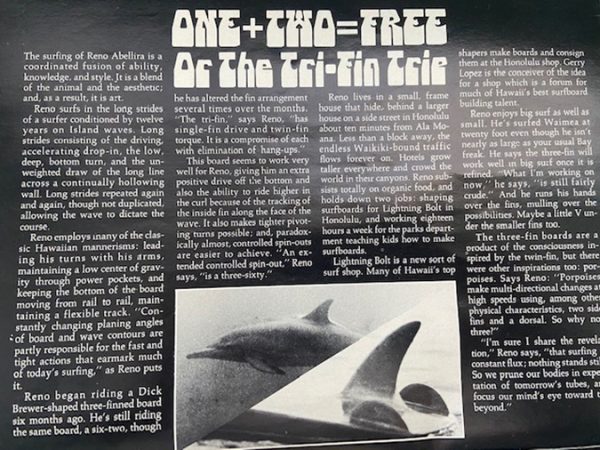 Reno Abellira’s two-plus-one story in SURFER, the precursor to the thruster. Photo: From SURFER magazine

The surfboard industry responded quickly, with a number of manufacturers offering models equipped with tri-fin boxes, and one company even marketing adhesive stick-on versions of the small side-bites. But although at the 1973 U.S. Championships three out of five men’s finalists rode tri’s, and in 1974 Ventura’s Campbell brothers debuted their extremely concaved, twin-keeled, three-fin “Bonzer”, the tri-fin concept gained little traction in the surfing world’s broader consciousness.

Simon Anderson was about to change all that. Rather than work off the deep center-fin, smaller side-fin configuration, hewing more closely to Williams’ trailing-fin concept, Anderson instead sanded down three fins to approximately the same four-inch height and positioned them in a triangular cluster, the front fins flat-side foiled and toed-in toward the nose, the rear fin foiled double-side and positioned several inches up from the tail. Uneasy about all that hardware hanging off the stern, he then reduced the nose width and outline in an effort to loosen up the board, drawing inspiration from Australian shaper Geoff McCoy’s wide-backed, narrow-nosed “Lazor Zap,” an extremely maneuverable, yet otherwise questionable design inexplicably championed by ascendant team rider Cheyne Horan. Anderson then added a cutaway wing in the outline adjacent to the front fins, slapped an Energy sticker on the deck and called his new creation the “thruster.”

Interestingly enough, the “thruster” wasn’t born of months and years of R&D. In fact, Simon took that very first one out for a surf at North Narra, and then came right back in espousing to confidants the very same attributes described by Reno Abellira some nine years earlier: here was a board with the looseness of a twin-fin but with the holding power and drive of a single fin. Boom — one and done. Mark Richards, look out.

Anderson tried his tri’s in seclusion in Hawaii that winter, then in early 1981 had a less-than-auspicious “soft opening” at a Florida trade expo (receiving the same number of orders as thrusters had fins) followed by an appearance at the annual Katin ProAm held in Huntington Beach where, though Simon’s reputation was unassailable, his extravagantly-finned thruster was openly mocked. 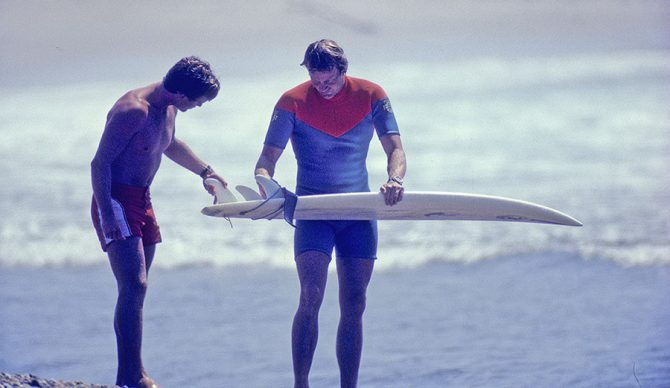 The record books take up the story from this point. After stumbling at the first event of the 1981 pro season in Australia, Simon and his thruster went on an absolute tear. The formerly reluctant competitor won the Rip Curl Pro at Bells Beach, carving his three-fins to victory in everything from 15-to-18 feet Bells Bowl to three-foot spinners at the Rincon section. A month later he took out the prestigious Coke/2SM Surfabout, surfing on his backhand at his home break of North Narrabeen. Then in December came the ultimate test, and ultimate validation: a win on the North Shore, at the 1981 Pipeline Masters.

It was a great year for Simon, but an extraordinary year for the surfboard. By the summer of 1982 almost all major manufacturers were cranking out Thruster knock-offs; by the summer of 1983 almost every short board being ridden worldwide had three fins. That trend has continued up until today, where, despite the proliferation of numerous “alternative” [read: non-thruster] surfboard designs, the clustered three-fin, as conceived and built by Simon Anderson, has become ubiquitous, and is without question one of the single most influential surfboard innovations in the sport’s history.