How to Watch Surfing in the Olympics 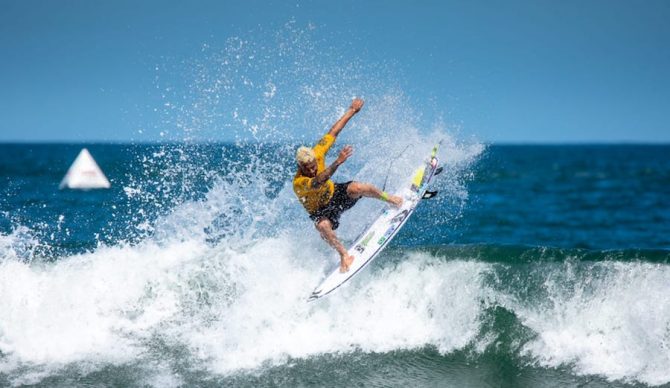 It’s on! So how do you tune in? The full Olympic surfing events will air on NBCOlympics.com in the U.S., on BBC and EuroSport in the U.K., and the Seven Network in Australia. You can find the full list of providers here.

Here’s how to watch surfing in the Olympics by region.

Viewers in the the United States can stream the entire competition on NBC, which offers a 30-minute temporary pass before requiring to sign up for its premium Peacock services. Click here to watch.

To find out which provider is broadcasting the competition in your country, click here.

To watch, go to 7plus.com.au and download the app on your phone or mobile TV.

Surfing will be broadcast on Globo in Brazil. Click here to watch the Games.

Check here to find out when and where to watch.

Click here to watch the Olympic on NHK in Japan.

Click here to view the schedule and tune in.

The athletes are there, the preliminary matchups have been set, only a few more days until the official waiting period for Olympic surfing begins. The surfing events are scheduled to take place over four days between July 25 and August 1. Currently, the schedule states that surfing will start August 25 with the medal events being held on July 28, but according to ISA president Fernando Aguerre, “They need initial competition dates to put some pins on the wall to start selling tickets. And if we have a good swell, we’ll run then — but if not, we have all the way through August ninth to run. They do the same thing in sailing — if there’s no wind, they can’t run, but they need to have dates on the board.”

There has already been much discussion over the potenital for lackluster waves at surfing’s Olympic debut because it’s typically the offseason in Japan. But Tsurigasaki Beach, located in Ichinomiya on Chiba Prefecture’s Pacific coast is a “world class surfing destination” during the right time of year.  As luck would have it, a very promising forecast is starting to appear (and possible typhoon-produced waves) that may put all those worries of a poor Olympic debut to bed. Japanese beach breaks have been known to produce stellar tubes when the conditions line up. It could happen. 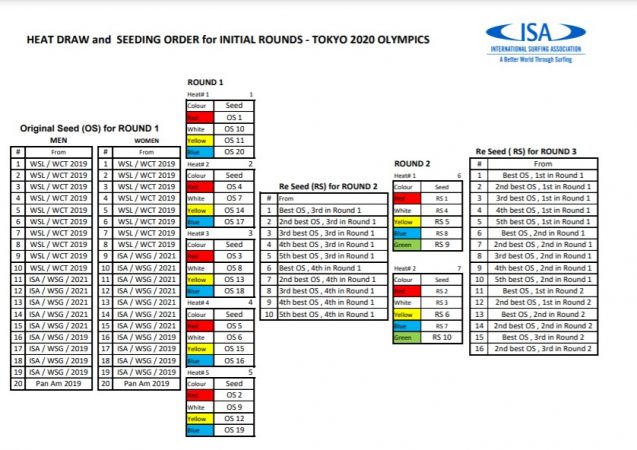 As far as the format goes, you can read the full breakdown here, but the long and short of it is that the 20 male and 20 female surfers will be matched up for Round One in four person heats. But Round One will not be an elimination round, “If you place third or fourth in your Round One heat, you go to Round Two. If you place first or second you go straight to Round Three,” Evan Quarnstrom of the ISA said over email. “Round Two is two heats of five surfers where the bottom two of each heat are eliminated. This turns the rather awkward number of 20 total surfers down to a nice 16 where typical single elimination, two-man heat brackets continue to the finals to determine the winner.”

Scoring will be determined similar to how current surfing events such as the World Surf League’s Championship Tour and the International Surfing Association’s World Surfing Games are judged. According to the official Olympic Surfing page, a panel of five judges will score each wave from 1-10, with a surfer’s two highest scoring rides contributing to their heat total. The official five criteria for judging will be commitment and degree of difficulty, innovative and progressive maneuvers, variety of maneuvers, combination of major maneuvers, and speed, power, and flow. Wave selection and in-water tactics involving a smart use of “priority,” will of course be crucial to winning the gold medal. 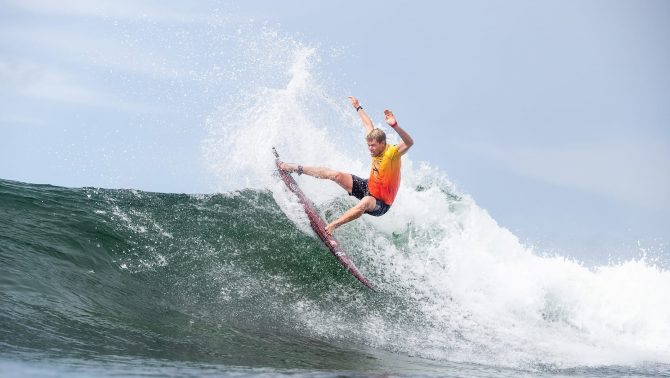 John John Florence, considered one of the best surfers in the world, has been injured, but is expected to compete in Tokyo. Photo: WSL

The lineup of Olympic surfers has been set since the ISA World Surfing Games in El Salvador, but until the games actually start (and maybe even after that) nothing is for certain. There’s been much speculation over whether or not Kolohe Andino (who has been off-tour nursing an ankle injury) and John John Florence (who withdrew from the tour himself after Margaret River to fix a knee injury), will be healthy enough to compete for the U.S., and GOAT Kelly Slater has been waiting in the wings with the hopes of adding “Olympic Athlete” to his list of accomplishments should either of them pull out at the last minute.

Earlier this month, Jordy Smith officially took himself out of the running, giving his spot to the next-highest ranked surfer, Italian Leo Fioravanti. As an added complication, any athletes who test positive for COVID-19 will not be allowed to compete, potentially making way for underdog alternates (or Kelly Slater) to squeeze in and nab a spot. But only two male and two female surfers are allowed per country, meaning Kelly will have to hope for a last-second withdrawal from John John or Kolohe if he wants in. At least for now, the full men’s and women’s lineups are below. 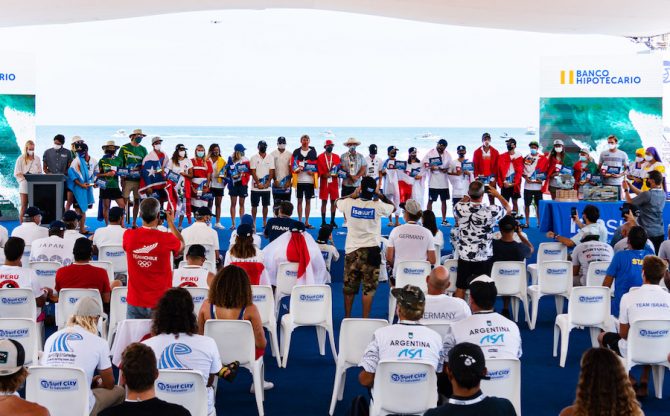 40 men and women are currently in Tokyo, waiting for the surf to (hopefully) appear. Photo: ISA/Ben Reed

Although John John and Kolohe are both coming off injuries, the two Team USA surfers will be strong medal contenders, as will Brazilians Gabriel Medina and Italo Ferreira. On the women’s side, Carissa Moore will be a strong favorite, but Brazilian Tatiana Weston-Webb and Sally Fitzgibbons of Australia are both riding the momentum of recent WSL wins, and Johanne Defay of France has been in powerful form lately.