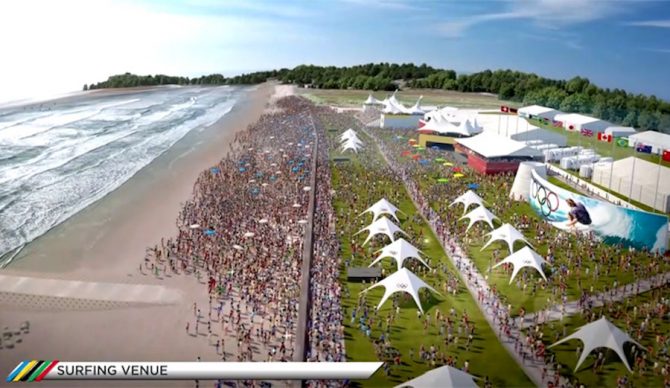 Here’s an artist’s rendering of Tokyo’s proposed surfing venue for 2020. Paris and Los Angeles have yet to address where surfing would take place when they host the 2024 and 2028 Games respectively. Photo: Tokyo 2020

If you’re in the camp that argues Olympic surfing should take place in a wave pool, you might cite the latest reported move by Olympic organizers to support your argument. The logic is obvious: the ocean doesn’t serve up waves on demand, therefore holding an Olympic surfing event in the just over two-week window for the games is going to be a gamble. According to the Japan Times, organizers are going to sell alternate competition day tickets to fans in the (probably very likely) event that conditions don’t cooperate with the planned competition itinerary between July 26-29.

The news from the Times, however, would make you believe organizers are digging themselves even deeper into an ocean-based competition at Tsurigasaki Beach in Chiba Prefecture. The anonymous source told the Times that alternative entertainment is planned for competition days, possibly because the ¥3,000 ($27) tickets will be non-refundable. In total, tickets will be sold for four extra days falling on either side of the current four-day competition window. So it seems as if fans set on seeing Olympic surfing with their own two eyes will have to literally double down, or they run the risk of settling for nothing more than a Blink-182 concert as their consolation prize.

As far as holding the event in a wavepool, the WSL and Kelly Slater both have plenty of skin in the game, having their own interests in building a wave in Japan. But currently, there is not much going on in terms of construction. The wave pool site is basically an “overgrown plot in a rural Tokyo suburb.” It’s tough to imagine the Slater/League power couple wouldn’t have some kind of influence on the potential for a wave pool-hosted Olympic competition considering that most of the competitors will be WSL athletes.

But again, the fact officials are planning for worst-case scenario in terms of surf very nearly closes the door on any chance the Olympic surf competition will be held on an artificial wave.