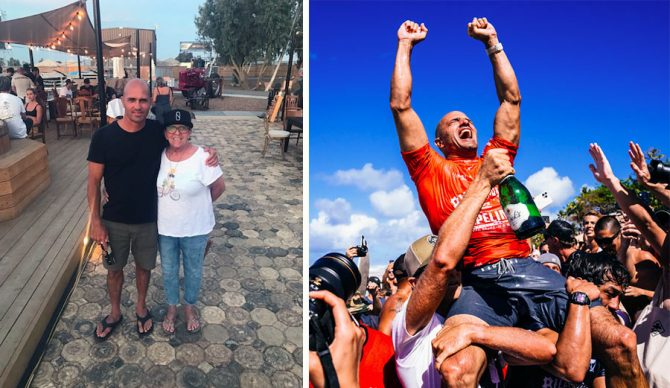 Judy Slater Lane, mother to Kelly Slater, shares exclusive insights from the greatest surfing career of all time with The Inertia. And the GOAT after his Pipe win. Photo: (left and below) courtesy Judy Slater Lane, (R) WSL

When someone maintains an unprecedented level of excellence in any endeavor, especially one as difficult as surfing with its constantly shifting medium and hyper-specific skill requirements, it’s hard for us humans to resist wanting to know more about that person. Yeah, everybody poops, but some seem to do it while levitating. What drives individuals who can seemingly walk on water? What motivates the savants and geniuses of their crafts that allow them to stay at the top for so freakin’ long?

In this case, that person is one Robert Kelly Slater, whose excellence has reached levels of ridiculousness in the surfing world. Eleven world titles. Eight Pipeline wins (the most demanding stop on the Championship Tour) and a level of fame that has far transcended our little world of exotic tour stops and trophy presentations. Because of surfing’s Hollywood appeal, and Slater’s otherworldly mastery of it, he’s made fanboys of billionaires and tech giants and fast friends of actors and astronauts.

But like any celebrity, he’s had his fair share of head-scratchers, too. His career plans are always shrouded in secrecy, his social media antics often get him in hot water, and his vaccine stance, right or wrong, has become particularly prickly in recent weeks as he’s refused to divulge his status while defending freedom of choice – which could have seemingly forced him to retire before he was entirely ready (although that mystery seems to be clearing up).

Kelly rarely engages with endemic media. As mentioned, he’s sometimes too big for our little pocket of weird culture. And I get it. The guy gets bombarded by media requests from all corners of the globe, and anything he says gets dissected like a new virus beneath a microscope. But I sometimes feel like more interviews with little ol’ surfing media would do the man good. We know how to frame the questions, know the nuance of “the game,” that could help explain why he does what he does, and maybe explain it to the world a little better and give it context. I’ve interviewed the GOAT a couple of times and I’ve always found him extremely engaging when you catch him face to face. In the moment, he truly knows how to step out of his surfing career and talk to you, person to person. He’s not too big for an interview when you can catch him. (“It’s what I’m most proud of,” says mom. “He’s just kind to people who can do nothing for him.”)

So on his 50th birthday, I reached out to someone who knows Kelly best, who’s perhaps more willing to provide this clarity and context through her singular relationship with conceivably the most important surfer of all time: his mother, Mrs. Judy Slater Lane.

Judy is a helluva woman. She raised three boys, mostly on her own. In her mid-seventies now, her mind’s sharp and it’s easy to tell where Kelly got his competitive streak. She’s worked as a maid, a bartender, an EMT, sold family heirlooms – everything she could to make sure Kelly and his brothers could pursue the Sport of Kings. Because they knew Kelly had this surfing thing dialed from an early age. “Everybody was in such awe of Kelly,” she said of her son, who learned to surf with his older brother at five. “But I never thought of it as a sport. Kelly actually learned to surf on a boogie board. He was afraid of hard boards. He’d surf his little boogie board standing and do 360s on it and pretty much anything. When he got a hard board that was the last time I saw him (laughs).”

Kelly has talked about his father’s alcoholism and how the man essentially left the family in the lurch, leaving Judy to do extraordinary things to fund the boys’ travel.

“Their dad wasn’t around much,” she told me. “I worked as a maid and got paid four dollars an hour. I just wanted to have enough money to feed them and get them going where they were going next. (I was a musician) and I had a banjo that I loved. It was a 1937 gold-plated Gibson five-string banjo. I sold it so they could go to California, I think it was.”

As Judy duly stated, Kelly was a savant, a phenom that could wow at a young age so people were willing to take care of him on the road. “Kelly’s got more mothers around the globe than anyone I ever heard of,” she said.

“(The leaving )was really hard for me. It still is (laughs). He was 10 when he first went out to California. I always knew where he was going, and did everything I could to get him there. On the other end, I would make sure he was with someone I knew. They knew if anything happened I would come after them in a heartbeat. I knew a lot of people in California. There was a girl on the all-star team where they went to Hatteras (North Carolina) for the East Coast Championships, she’d take care of my kids. In Australia, it was another friend.” 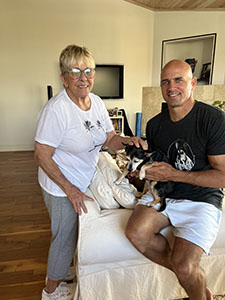 Judy told me that Kelly’s competitive nature was otherworldly before he really started surfing (probably passed down from mom who played field hockey and tennis). He pitched in baseball as a kid (“He’d win everything.”) and was basically a hard charger from day one. Mrs. Slater Lane shared a story of when Kelly broke his collarbone on the playground, he was told to take it easy. Instead, he kept on charging, taking another nasty fall on it, sending him back to the doctor. “‘You’re not going to believe this,’ the doctor told me, ‘but he pushed his bone back in perfect position.’ So we took off the shoulder sling and let him go to school. He never hurt anything after that.”

It’s true, Kelly Slater is a walking medical miracle. Here he is at 50, about to compete at Sunset (“Even though he always hated Sunset,” according to his mom.). He’s lived relatively injury-free save for a famous foot issue from a closeout at Jeffreys Bay later in his career. His health and wellness philosophies are well documented and have surely helped him prolong his career. But his medical stance on the Coronavirus vaccine has proven problematic. He’s never stated his vaccination status but has been outspoken in his calls for freedom of choice. That stance drew the ire of the Australian government recently, which threatened to keep him out of the country for the Australian leg of the tour unless he got the jab, like it did Novak Djokovic in tennis. But yesterday, the Australian press reported that Mr. Slater may have relented after he told Reuters that he’d “See (them) in Australia.“

“(My vaccination status) is an important question, and there’s a reason I’m not talking about it that is personal,” he told Reuters. “I do believe that medical privacy is a real thing. But I think my answer that I’ll see you in Australia answers that.” According to the WSL, he hasn’t applied for a vaccine exemption.

Talking to Judy perhaps provided some context for Slater’s thinking. She says that after getting vaccinated, she thinks she may have suffered side effects.  While most medical experts say long-term health problems following vaccinations are rare, she also noted that Kelly says he has friends that have experienced side effects too (as he has shared on social media).

With pandemic protocols continuing to evolve and impact professional sports differently, the final act of Kelly Slater’s historic career remains unwritten. After winning the Billabong Pipeline Pro in dramatic fashion last week, Slater hinted (as he has before) that the competition might be his last. His contradictory message (“See you in Australia”) leaves us hanging in the balance to see if he’ll commit to chasing a 12th title. And like most of us, Judy’s torn on how she’d like to see it all end.

“One way or another, I’d love for him to surf, because I know he loves to compete. Why I’ll never know,” she says. “I want him to do what he thinks he should do. He’s the best judge of that. But do you want to watch him start losing? I don’t want to see Kelly start losing. I’d like to see him go out on top.”