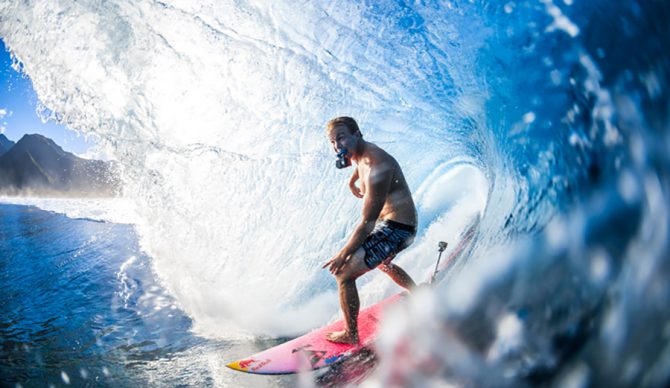 Pioneered by Jamie O’Brien, perfected by Ben Gravy, and continued by Julian Wilson, Nic von Rupp, Koa Rothman, Mark Healey and more, it begs the question: is a successful vlog now essential for a pro surfer?
“I enjoy the filming and the creative aspect of the Von Froth vlog, but the timing aspect and sheer amount of work can suck,” Nic von Rupp tells me. “I can be up at 5 a.m. to surf 70-foot waves all day at Nazare, and then we’re editing till 3 a.m. so that it’s live the next day. You are chasing traffic, to be the first, but it’s exhausting.”

Von Rupp is the European freesurfer whose vlog is one of the more successful recent surf video series on the web. His single episode from an insane session at Greenbush in 2021 has had almost 450,000 views, and he currently has 35,000 subscribers.
Seemingly that should be a fairly good source of income for a free surfer who increasingly needs more than just sponsor money to pay the bills and feed his big-wave addiction.

“The main goal for me isn’t sheer numbers, but the viewing figures define if I can get more support from my sponsors,” said von Rupp. “And by support, I’m not talking about profit, just about covering the bare-bones expenses. It doesn’t make money. I see it as a fun and creative form of self-investment. That’s me personally. I mean if you ask Jamie O’Brien for example, he’ll be making x-amount per episode.”

I couldn’t extract those numbers from Jamie, but clearly, he has made some serious cash. And rightly so. After all, he is the man that invented and monetized the personal surf vlog.

Originally a showcase for O’Brien’s Pipe skills, his vlog morphed into a reality television show based around crazed stunts, extreme random surf action, and the personality of JOB himself. It’s currently in its ninth series proving that O’Brien’s life of good mates, good-natured bullying, sometimes epic waves, stupid stunts, and his unstinting commitment to not giving a fuck what people think remains as popular as ever. He currently has almost 800,000 subscribers plus a slick merchandise sidearm and brand support.
His herculean effort was the inspiration for Benjamin Graeff, better known as Ben Gravy, the vlogger and New Jersey surfer who broadcasted his surfing life and the novelty waves that became his trademark. He gathered a huge following, with his honesty and positivity. His work ethic was incredible, as he racked up 1,000 clips in a couple of years. He became a “pro surfer” without competition or sponsorship at the age of 30 and now sells his boards and clothes all over the world.
Nathan Florence was another early adopter and since 2013 has racked up more than 20 million views on his YouTube channel. While the big waves he rides are a key drawcard, it’s personality that he believes drives the success of any vlog.
“Individual surfers running their individual vlogs are just giving it a more raw, genuine feel,” Florence told The Inertia last year. “I think that’s the future of content, and I think it’s what the majority of people enjoy watching now.”
From Julian Wilson to Koa Rothman and Laura Enever to Brett Barley, many surfers know now that a successful surf vlog is as important as any sponsor. In fact, not having one can mean not getting any sponsors in the first place.
Yet for every successful vlog, there’s 500 more lying shivering, unfed and unwatched in the dusty corners of YouTube’s nuclear-powered server. The mix of personality, live surf action, and timely content relies on an unknown, and ever-moving, algorithm that only a few surfers have managed to crack.

The one key ingredient however that is essential is commitment. These vlogs take a team and a huge amount of time. It’s like pushing a giant rock uphill; if you stop for a week, or a month, you’ll be back where you started. That means there’s constant pressure to deliver. And there’s no hiding if it works or not. The viewing numbers are there for all to see.
Jamie O’Brien, for example, has recently come out saying he is exhausted and is now aiming to produce one vlog per week of high quality, instead of running ragged around the North Shore or the entire world, trying to put out two videos a week. “I was forgetting to, honestly, have fun,” he said.
Von Rupp too has reached a similar conclusion. “The series is growing, I’m using more people, but I don’t want it to be the center of my life,” he concluded. “Last year for a time I was obliged to make two episodes a month and I have since changed that. Now it’s about putting the surfing first and having the vlog follow if it feels right. I don’t want it to be the reason I live my life.”