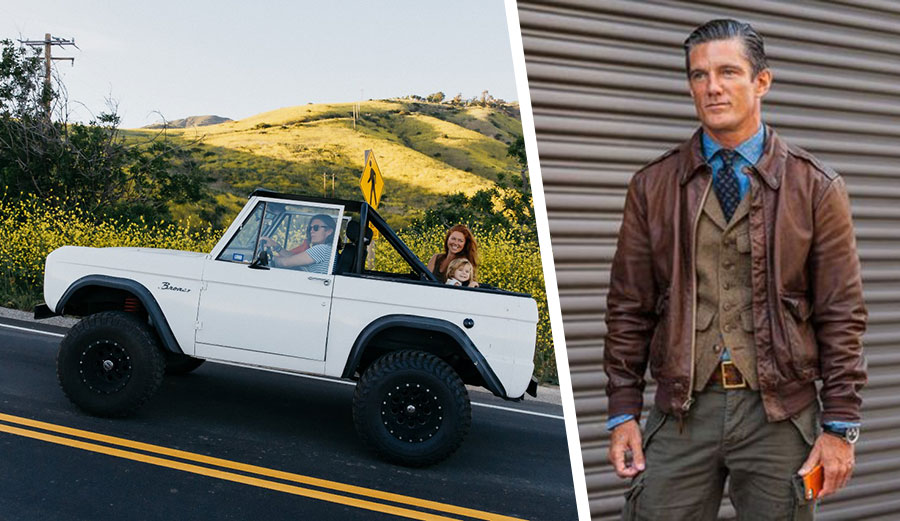 John Kozlowski had it made in NYC… but he wanted a different life. So he went out and made it happen. Photos: Courtesy of Kozlowski

Editor’s Note: This feature was made possible by our friends at Sea n’ Soul.

Up until a few years ago, John Kozlowski spent most of his time in a corporate office in New York City. He’d worked incredibly hard to get there, had established himself as a heavy hitter in his industry, and was raking in the money. As the Senior Vice President of Global Brand merchandising for Ralph Lauren, Kozlowski was in a spot that many would envy — but something was missing. He was working 12-14-hour days, grinding away all week, burning the candle at both ends and spreading himself too thin. Life was passing by and he realized something that many people realize: despite all the hard work he’d put in to get to where he was at, he wasn’t living the life he wanted to be living.

“I always swear that the Earth would spin a little faster in New York than it does anywhere else,” he told me. “I mean, it just goes by so fast. You blink and a year would go by. Someone wise once told me a saying I really felt at the time: ‘the days are long, but the years are short.’ I’m incredibly grateful for my time at Ralph Lauren. I grew up there. I learned a great deal. It shaped me. I have the utmost respect for Ralph and his brother Gerry…I just wanted to write a new chapter for myself and my family.”

Unlike many people, however, when Kozlowski realized his life was not panning out exactly as he wanted, he decided to do something about it. He, along with his wife Erica and their newborn son Sailor, sold everything and started over. He had a business idea in mind, and, as scary as it was with a six-month old baby, he threw caution to the wind and went for it.

“I had always had this dream to move to Southern California,” he explained. “Before I met Erica, I would make multiple trips there every winter. I would stay in Venice, but I’d surf in Malibu all day. I always loved and wanted to make that leap. When Sailor was very young, we decided it was time to make the jump.”

While they were living in New York, every weekend they’d make the three-hour drive to Montauk. They had a weekend house there, and it felt more like home than anywhere else.

“We loved the lifestyle there,” he said. “Being next to the ocean and surfing — just spending time in the natural environment. We wanted that to be more of our life seven days a week. You know, I’d work these crazy long hours, then we’d drive three-plus hours to get there. We’d get there at 10 p.m. Friday night, totally and completely wiped out and exhausted. Saturday would be amazing. Then we’d wake up Sunday, and by 10 a.m be going, ‘my God, we get to drive back all over again.’ The life that we had for a day and a half out of the week was amazing, but the life that we had the rest of the week just wasn’t what we wanted for our family.”

The business idea he had was blurry, but with all his years in the apparel industry, he knew it had a solid backbone.

“With everything going on and the apparel industry doing so much damage to our home planet — I think being a surfer naturally makes you an environmentalist — I wanted to do something. I was seeing the trend that resale was becoming such a big thing, but there wasn’t a resale specifically for the outdoor market. I said, ‘you know what? Why don’t I combine my passion for surf and the outdoors with my background in resale and fashion?’ And I came up with the concept for Sea n’ Soul.”

As I said, though, Sea n’ Soul was just a vague idea in his head. “I’m a creative, you know?” he laughed. “I didn’t know the first thing about how to get it built, who to call… I knew nothing. But I started down the path, kept talking to people, and just kept going.”

After talking to enough people, that blurry notion began to crystalize into what Sea n’ Soul has now become: an app that’s a social marketplace for outdoor-adventure gear and apparel. Think of it sort of like a high-end Craigslist or Facebook Marketplace devoted solely to lightly used gear such as surfboards, skateboards, snowboards, mountain bikes, kayaks, boots, jackets, and vintage items related to the outdoors.

Unlike Craigslist or Facebook Marketplace, though, Sean n’ Soul gives a portion of every single transaction to nonprofits, including the Surfrider Foundation and Outdoor Alliance. Those partnerships were the idea from the very beginning of Sea n’ Soul.

“It was always the goal to be a regenerative company that gives back to the places we love to adventure in,” he told Outdoor Alliance. “The ocean is different every time you enter the water. It’s easy to recognize the human impact on it and whether or not the water is clean or polluted. Because of this belief people who ride waves seem to be more aware of the environmental impact human beings have on the planet.”

The app has direct links to those partners, along with a series of pre-written letters with calls to action to senators that the user can sign and send off with the click of a button.

Sea n’ Soul, unlike transactional marketplaces, is much easier to use – especially in the transaction process.

“Let’s say that there’s a surfboard that you want that’s on our app,” Kozlowski explained.  “You go in and if someone’s asking  $500 for it, say you offer $450. If the seller says yes, it automatically locks it up. On Facebook Marketplace and Craigslist, some people will say, ‘hey, I want that. Or you might even get multiple people saying, hey, I want that. But then they just don’t show up.”

Kozlowski decided that that there had to be a way to streamline things. Sea n’ Soul now has an exclusive deal with UPS to ship items. Once the buyer receives the product, they have 48 hours to, as Kozlowski says, “call bullshit.” Once the 48 hours is up, the money automatically goes to the seller.

Sea n’ Soul’s commission structure is far more advantageous to the seller than other resale apps. For a limited time, they’ve decided to lower it to 10 percent in hopes of grabbing more interest, spread good vibes, and encourage people to try it out.

Giving up an entire career and a whole life to chase a blurry dream was not, as you’d imagine, an easy decision for Kozlowski.

“It was my dream to get where I was,” he said. “You know, it was a long hard climb to get there. Working for a big, huge $7 billion dollar corporation. New York City, it’s a dog-eat-dog environment. It was tough. It was really, really tough to get that to that level. And then equally hard to walk away, you know, because the pay was so good. The benefits were so good. But I just didn’t feel like we were we were living life.”

Dreams can be very different when reality hits. All the hard edges come into focus, and most things in life are going to be a little harder than you thought — especially when you happen to be chasing your dream across the country in the middle of a global pandemic.

When everything first happened, Kozlowski packed up a car and drove to West Palm Beach, Florida where Erica’s parents live. They stayed for two and a half months and negotiated on a house in Malibu. All the banks were basically shuttered. Flights were being cancelled all over the world. When they finally managed to make their way to California, the house they’d purchased wasn’t ready. Some good friends had a sailboat in Oxnard Harbor, so they ended up living there for several weeks until they could move in. The house was far smaller than their place in New York — one they’d been living in for 16 years; a house they’d gutted to studs, redesigned, and rebuilt — and Kozlowski had more than a few moments of self-doubt. When I asked him if he was scared to make such a massive life-change with a newborn, he paused for a moment.

“You have no idea,” he said. “I still sometimes wake up in the middle of night going, ‘Oh my God. What did I do?’ I walked away from making a lot of money. It afforded a great lifestyle.”

But now, a few years after that great leap of faith, he’s feeling better than he ever thought he could. His home is smaller — a little two bedroom on top of a hill — and he might not be making Ralph Lauren money, but he’s doing something he’s passionate about. Sea n’ Soul is taking off, and he’s got big plans for the future. 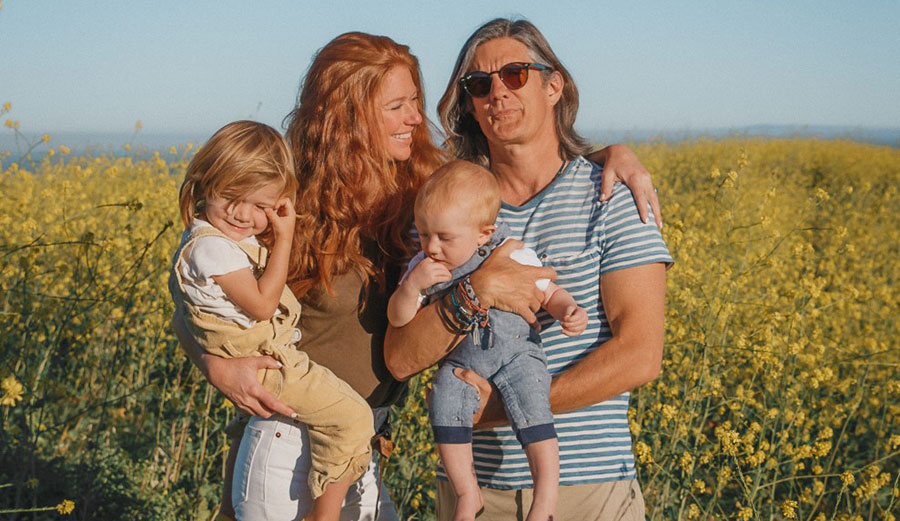 Life is a little different now, and they wouldn’t have it any other way. Photo: Courtesy of Kozlowski

“I see the marketplace growing and expanding,” he said. “Whether you’re snowboarder or surfer or skater, whatever you’re into, you can find your outdoor gear and and apparel. It will be the first place that you think of to sell it because you’re getting a targeted audience. The advocacy portion of it is growing and becoming much more important, as well.”

Also on the docket for Sea n’ Soul is a brick and mortar shop, situated in Zuma Beach Plaza in Malibu, which opened its doors on Friday, June 3. It’ll be a lot more than just a surf retail space, though.

“The surf shop will be all hand-shaped boards,” he said. “A lot of single fins, a lot of fish boards, a lot of mid-length boards. From an apparel perspective, no Billabong, no Quiksilver… nothing like that. All brands that have a very sustainable ethos. Much more of a curated shop. There’ll be coffee and a juice bar. It’ll be a meeting place.”

Another project in the works is an interesting idea for anyone who might be in need of a new wetsuit. Instead of simply trashing the old one, you can bring it into Sea n’ Soul and be rewarded with a discount on a new one. The old one will be repaired and then re-sold on the app.

While it’s still early days for Sea n’ Soul, it’s rapidly becoming apparent that Kozlowski’s decision to change his life for the better is working out. And, with any luck, Sea n’ Soul will change the way we buy outdoor gear, help the environment, and maybe even make the Earth spin a little slower than it did in New York City.

See more from Sea n’ Soul on the website and get the app on Google Play and Apple App Store.