Of Sea and Stone: Why Surfing and Climbing Have So Much in Common 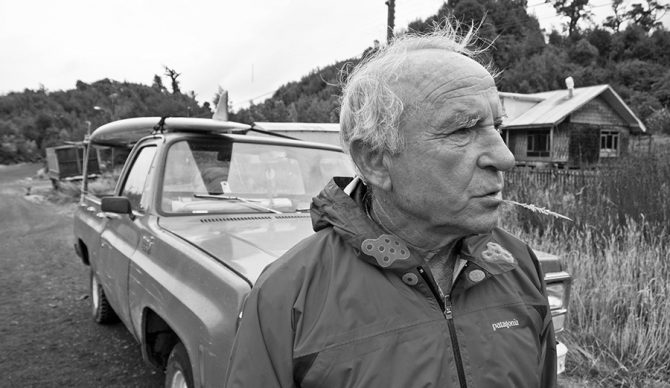 In his 1993 memoir, We Aspired: The Last Innocent Americans, writer Pete Sinclair evocatively chronicled a period of American history that between 1959 and 1969 saw the development of a remarkable archetype. This was a small, interconnected group of men (and a few even more adventurous women) who, turning their gaze from contemporary, societal norms of regimentation and attainment, chose rather to dedicate themselves to the pursuit of something less productive, more ephemeral, yet vastly more spiritually satisfying. Something that couldn’t be found wearing a tie or punching a clock, but only while seeking communion with one of the Earth’s most powerful natural forces through dynamic physical endeavor that effectively earned nothing, yet ultimately gained everything.

Sinclair was writing, of course, about mountaineering, but could just as easily have been writing about surfing during the same epoch, when our nascent surf culture was developing along the very same lines, establishing its counter-culture sensibilities and lifestyle in a remarkably similar manner. In fact, the historical development of climbing and surfing, while set in almost antithetical environments, mirror each other in uncanny fashion, and, in many cases, actually overlap.

This I’ve learned on numerous surf trips and even a few lucky days climbing with Yvon Chouinard, one of the pioneers of modern climbing and a life-long surfer. While having earned his renown in the stone-bound vertical world, Yvon’s been seeking perfect trim in a more forgiving medium as long as he’s been climbing and the chance to experience both sports with him has provided numerous opportunities to compare and contrast the two. “The leader must not fall,” he once told me, articulating rock-climbing protocol in the 1950s, when hemp ropes and webbing waist belts passed for safety equipment on the sharp end of the difficulty scale. I witnessed the same ethic on a trip to Tahiti, scratching over a pumping set, watching Yvon drive into the treacherous, super-shallow inside bowl with no sign of backing off — and no business being there, really, a more-than-middle-aged, multi-million dollar business owner. I anticipated some sort of rescue, or at least some serious first aid, until, amazed, I saw him kick out down the line.  “Like I told you,” he said, paddling back out past me with a smile. “The leader must not fall.”

Days like this, and a few spent roped to Chouinard on rock from Teton granite to La Spezia limestone, along with my continuing, decidedly intermediate-level climbing experiences, has led me more than once to consider the similarities between the two sports and the lifestyles attached to them.

For example, surfing had Tom Blake, the relentless innovator who in the 1930s and 1940s cut the weight of surfboards in half and added a skeg, changing the entire direction of the sport, while climbing had John Salathé, the relentlessly-innovative Yosemite climber who during those same years developed the high-carbon, reusable steel piton that opened up the Valley’s most difficult sheer faces, changing the entire direction of his sport. Speaking of Yosemite, during the fifties, sixties, and seventies, the valley had the legendary Camp 4, ramshackle staging ground for two generations of talented, dedicated dirt-bag pioneers who redefined vertical performance on big walls, while during the same decades surfing had its Makaha quonset huts and funky North Shore crash pads, where our “right stuff” aquanauts stashed their elephant guns — and later their ‘stash —while redefining big wall performance of a different sort at The Point, Sunset Beach, and Waimea Bay.

One of surfing’s most enduring intra-cultural rifts has been “soul surfing” versus “pro surfing,” soul, apparently, expressed only through the use of black wetsuits and clear boards. Climbing, meanwhile, has its “trad” versus “sport” schism, the former characterized as from-the-ground-up ascents following natural features, using hand-placed protective gear only, the latter utilizing pre-placed bolted hangers on with which to clip protective ropes, creating a choreographed route. These ethical distinctions, however petty they might seem to outsiders, take on huge significance to the suitably devoted in both watery and rocky camps.

Surfing has freakish, “How does he pull that shit off and not die?” talents like Kai Lenny, climbing has Oscar-winning Free Solo star Alex Honnold. Climbing has supposedly mellow, New Age, full lotus-yet-super bad-ass athletes like Chris Sharma, he of the 5.15, seemingly impossible overhangs. Surfing has his doppelganger in Dave Rastovich, he of the impossibly stylish flow from two feet to 20. And let’s not forget the women: their Lynn Hill, who in 1993 became the first climber of either gender to free climb the 2,900-foot “Nose” route on El Capitan, and our Layne Beachley, the first competitive surfer of either sex to win six consecutive world titles.  Surfing has the “VAL”, identified by their cheerful attitude, late-model SUV, Patagonia wetsuit, changing bucket and (God forbid!) seven-foot Wavestorm, while climbing has its “gym-climber”, recognized by their cheerful attitude, late-model SUV, Arc’teryx tank top and belay certification badge hanging from a Black Diamond backpack.

Yet these are only tangible characteristics that seam surfing and climbing together in the “adventure sport” tapestry — the stuff you can see. It’s what surfers and climbers feel that really sets them on a parallel course. The sense of freedom attained when you step off solid ground and into a completely different realm, measuring yourself not against anyone else’s expectations, but against a spectacular natural element; requiring, both on sea and stone, a fluid spontaneity, a sense of total focus and a piercingly-present state of mind, the continued pursuit of which can totally take over your life.  Regardless of the more obvious differences, whether three pitches up on New Hampshire granite or tucking under a pitching lip at a favorite beach break, it’s this aspect of the surfing-climbing life that each tribe shares most passionately.