The Origins of the Pig Dog, a Technique That Changed Backside Tube Riding 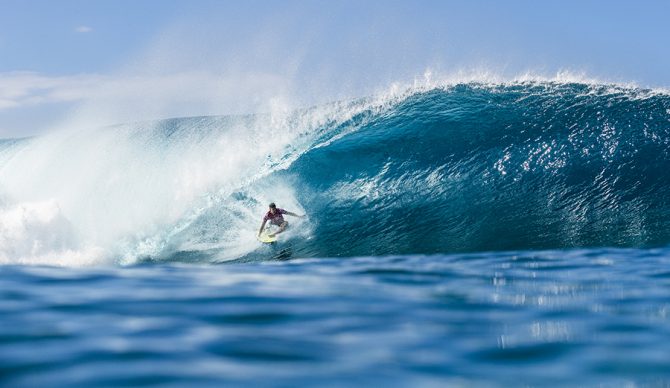 John John has mastered the Pig Dog technique, as have many Pipeline gurus. Photo: Cestari/WSL

Editor’s Note: Welcome to our new series, Surf History 101, where we look at innovations in the world of surfing and beyond that changed the pursuit forever. In this edition, Sam George looks at the “pig dog,” where it came from, and how it’s become an intricate part of tube-riding progression.

What Is It and Where Did It Come From

Archival surf movies feature a number of instances in which surfers, riding backside, find themselves momentarily “locked in” as the curl peels over their shoulder. In fact, as far back as 1961 filmmaker Bruce Brown captured shaky imagery of test pilot Phil Edwards flirting dangerously close to the barrel on his backhand on what is considered the first “real” wave ever ridden at the “Banzai Pipeline.”

But it wasn’t until the next year, on New Year’s Day, 1963, to be exact, that the first deliberate attempt was made to ride in the tube backside. John Peck, a talented 18-year-old mainland transplant raised in Hawaii, attacked the Pipeline tube with a startling prescient approach: crouching and grabbing the outside rail during the drop, literally pulling his heavy longboard tighter into the curl. Photos from that session inspired plenty of the performers who followed in Peck’s wake, including young Herbie Fletcher from Huntington Beach, who, only a few seasons later, grew so adept at getting “locked in” backside at Pipe that he was featured in a SURFER Magazine tips column, demonstrating his technique in sequential photos.

The unwieldy equipment of the time, however, severely slowed progression and it wasn’t until some years after the late-1960s “Shortboard Revolution” that gutsy regular-foots like James “Booby” Jones, Owl Chapman, and Sam Hawk could occasionally place themselves behind the glass curtain. The so-called “Free Ride Generation” emerged next, when during the epic winter of 1976-77 a talented trio of visiting surfers — South African’s Shaun Tomson, his cousin Michael Tomson and Aussie upstart Wayne “Rabbit” Bartholomew — regularly shocked the status quo by riding deeper in the tube than was thought possible backside. Still, despite their balls — and back — to the wall attack, they faced the same dilemma that every one of their regular-foot predecessors did: how to slow themselves down enough without the ability to effectively drag their hand in the wave face. 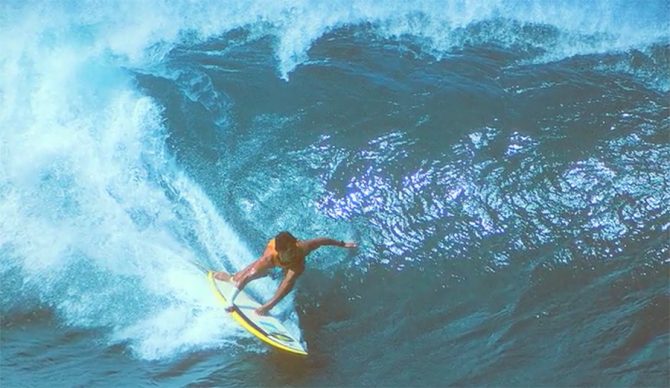 All that changed in 1982, on the final day of that year’s Pipeline Masters. Top Island pro and perennial finalist Michael Ho showed up that morning with a fiberglass cast on his broken right wrist, the result, so the story goes, of a late night altercation. Sanding the cast down to make use of his fingertips, Ho paddled out and took his position dead center in the Pipeline peak. His first ride was a revelation. Rather than drop to the bottom and pull up into the tube, as was the common, if risky, practice, Ho assumed a bent-legged, tripod stance, grabbed the outside rail with his cast hand immediately at takeoff, and, dragging his inside hand, and on some rides even his butt, slowed himself down enough to draw a critical line through the center of the wave. Ho’s inadvertent technique allowed him to pull through tube after tube in the event’s final, at times actually making it look easy. And just like that backside surfing had changed forever.

Ho’s nascent technique – soon after pegged as the “pig dog” – completely altered the perception of backside surfing. Once considered a disadvantage, “pig-dogging,” as perfected by surfers like Dane Kealoha and Johnny Boy Gomes, and later by Kelly Slater and “The Momentum Generation,” proved to actually be an advantage when surfing Pipeline. Consider that since Ho won that Pipe Masters in 1982, regular foot surfers have won 26 out of the last 37 titles. More broadly, though, this backside tube-riding technique has since been applied to hollow waves the world over, opening up global barrel potential to a wider range of surfers, regardless of which foot they put forward.

From the Superbank to Stockton Avenue; from Newport Beach to the New Jersey shore; from Pipeline to Pascuales; despite its coarse moniker, the backside “pig dog” gives more surfers in more places more opportunities to ride the tube. What’s not to love?

Want to improve your backside tube riding? Try this.