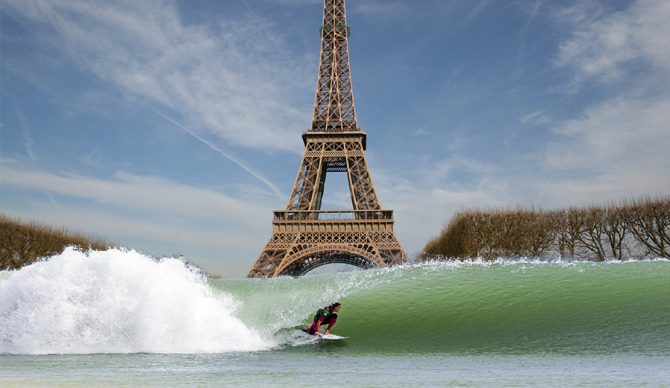 Could the Olympics finally be held in a wave pool? It’s looking more likely for Paris, 2024. Photo: Wikimedia Commons/WSL

According to Agence France-Presse, a suburb of Paris with a population of about 50,000 people, has placed an official bid to host surfing when the 2024 games come to France. It joins Biarritz and Lacanau, two known surf destinations in Europe for the honor to host Olympic surf competition but there’s one unique characteristic about Sevran for surf fans worth noting: it’s 175 km from the ocean.

This is obviously a quick and easy fix. Sevran hosting surfing in 2024 just guarantees that year’s competition would happen in a wave pool. This isn’t just a random town tossing their name in the hat, though. Sevran is actually the planned site for a Wavegarden Cove facility called “The Greater Paris Wave,” reported to open in 2023. According to Wavepool Mag, that is part of an “urban renewal project” plan for what local leaders call “the poorest department in the Parisian region.”

A letter proposing Sevran be considered as Olympic surfing’s host city said the new facility “will help spread the wealth generated and also the values conveyed by this global event” and make the suburb a destination. President of the French Federation of surfing, Jean-Luc Arassus, said “the artificial wave must be as close as possible to natural conditions, preserving the uncertainty of waves in the natural environment,” supporting the already age-old argument that Olympic surfing would benefit from guaranteed waves.