The Unexpected Influence and Appeal of Skimboarder Blair Conklin 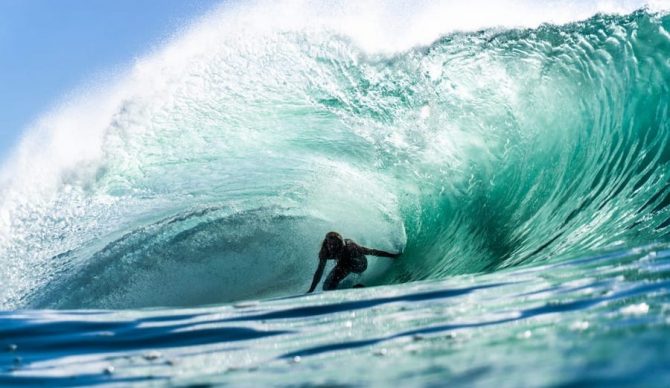 Blair Conklin, deep in the belly of a Wedge beast, as seen through the lens of James Ferrell.

You’ve probably never heard of Combesgate Beach. After all, the golden sand-lined shorefront nestled in the crook of the Morthoe Headland just to the north of Woolacombe Bay, North Devon, in the UK, disappears at high tide. On a recent Saturday however, as the 24-foot-high bulge of high tide drained off the shingles, Blair Conklin stood on the stand, surrounded by a gaggle of first-time skimboarding kids, starstruck UK surfers, and a clutch of new mates.

It was yet another sign of just how far the 27-year-old has infiltrated and cross-pollinated the various surfing tribes. Conklin was in the UK as the major attraction for the newly minted Spring Classic Surf Invitational. From there he was taking his new movie Easy Slider, on a European Tour that included screenings in Portugal, Madrid, San Sebastian, and Hossegor.

At each stop he spread the gospel of the new-age multi-rider – from boog, to standup boog, skim, thruster, whatever… if it floats, Blair’s going to rip it. And, as his 250,000 followers on Instagram indicate, whatever he stands up on, people want to watch.

“I was born and raised in Laguna Beach, which is the home of skimboarding,” Conklin told The Inertia. “I grew up playing in shorebreak that was much better for skimboarding than it was for surfing. It just meant you could hang on the beach more.”

By the time he was 15, he was getting paid to ride a finless board and would go on to win three consecutive Skimboarding Pro World Tours from 2016 to 2018. Back then, while Newport’s Wedge was the spiritual home of skimboarding, the surfing crossover element hadn’t spread far from the inside corner of the Newport Harbor breakwall. 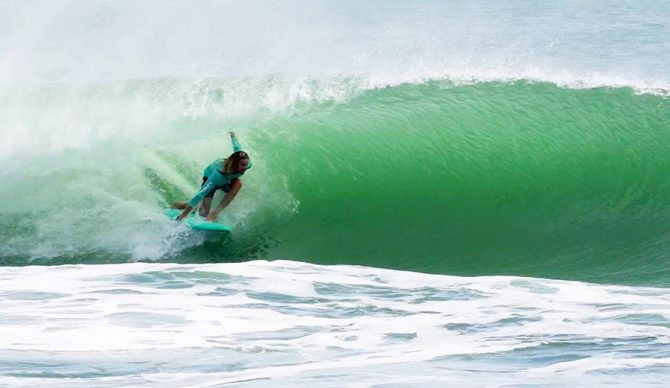 Blair, under the hood on a soft-top in Nicaragua. Photo: Catch Surf

Brad Domke was perhaps the first to change that. When the Floridian skimboarded massive waves at Puerto Escondido in 2014, it was initially treated by the wider surfing public as a novelty. More brave than stupid, but not by much. His surfing skill and courage, though over time, would gain grudging respect from the surfing community.

Not long after Domke’s efforts went viral, and Conklin was competing on the skim tour, he moved from Laguna north to study environmental science at Berkeley. “Since the skim waves are few and far between up there, I spent a majority of my time surfing, and had to improve pretty quickly since Ocean Beach was now my backyard,” he said.

As naturally talented as he was, his surfing stepped up quickly. That in turn fed into his skimboarding. He kept dropping clips at the Wedge, and his ability to thread barrels, do kickflips and massive rotations, often on the same wave and all with an incredible style made him incredibly watchable. His talent also neutralized the usual discriminatory instincts of the various surfing tribes. Hardcore surfers, newbie lid riders and staunch skimboarders all fell under his spell. More recently, a trip to Idaho opened his eyes to the possibilities of river surfing. The Inertia has since received more than a few comments on how his skills showcased during that adventure have influenced river surfers from Wyoming to Montana and across the Pacific Northwest. Going finless is in – even inland, thanks in part to Blair. 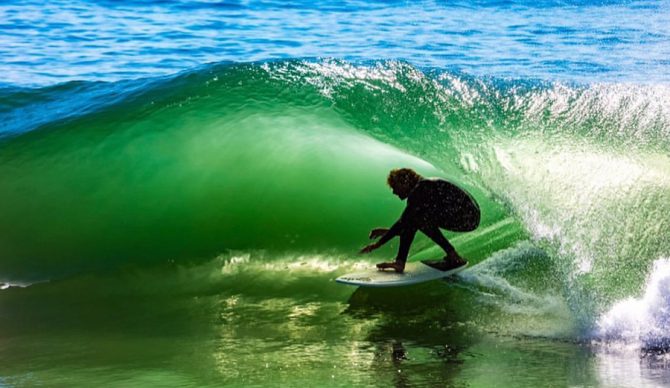 Finless and fancy free. The man knows how to get barreled. Photo: Larry Beard

“I think the main reason I fell in love with the ocean from the beginning was because I loved experimenting with different boardsports. I was just always trying to improve in whatever the heck it was I set my mind on, be it surfing, bodyboarding, or skimboarding,” said Conklin, when trying to assess his crossover appeal.

An appearance in Stab High in 2019 further amplified his surfing skills, as his aerial surfing was on par with some of the most progressive surfers on the planet. That he was riding a 5’1” Catch Surf foamie only added to his appeal and intrigue.

Since then, social media has further elevated his influence. His performances at the Wedge have been a mainstay (some fully clothed and staying dry), but Surf Ranch performances, cross-lake skimming, Cabo rock acid drops, Waco whips and ripping ferry waves have made him compulsive viewing. The science, for now, can wait.

“At the moment I can’t say I’m using my degree in my career that much as I’m too busy traveling and surfing,” he says. “However, partnerships with Surfrider Foundation, the Rob Machado Foundation, and Waves for Water, keep me in the ocean education game at least.”

But as he skirted the European surf coast signing autographs for industry hard nuts in Hossegor and starstruck skimmers in San Sebastian, his new, inclusive and damn-entertaining role in ocean sports (and beyond) can’t be denied. And long may it continue.

Editor’s Note: You can follow Blair’s escapades on the YouTube channel Skid Kids, here, and stay tuned for American premiere dates of the film Easy Slider. Until then, check out Blair’s film Skim River with The Inertia, below.