To Drop In or Not to Drop In: Surfing’s Burning Question 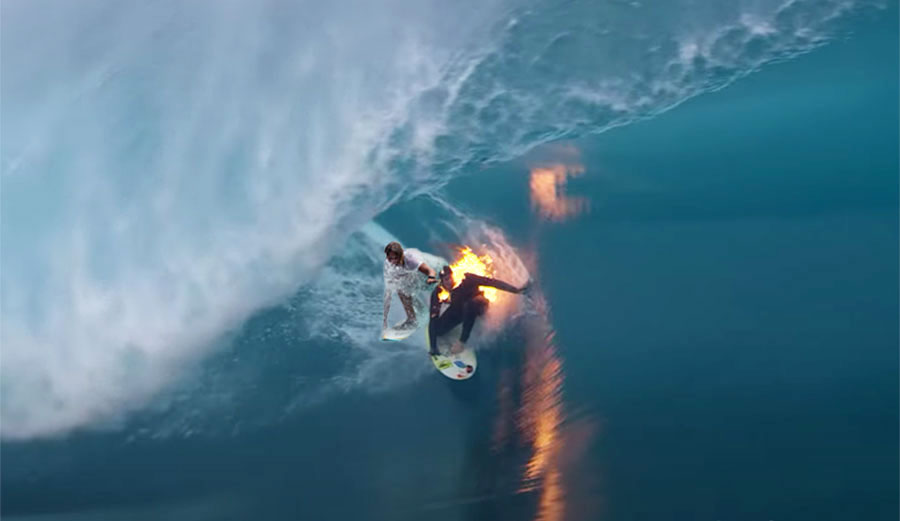 This isn’t a real photo. But man, is that guy getting burned! Images: Unsplash/Screenshot

“Don’t drop in.” It’s one of surfing’s golden rules, never to be broken. You never burn someone. Period. Full-stop. Until, that is, you burn someone. Because sometimes, you just gotta do it. And it’s going to happen, especially if you surf with other human beings, which is likely. A good friend told me once that “if you’re not in front of someone, you’re behind them.” Granted, she was talking about surfing First Point Malibu, which is arguably the epicenter of dropping in, but you get the idea. It’s a fine line, though… most of the time, dropping in is not okay. Punishable by death. Waxed windows. Slashed tires. Blood on the rocks. Rumble on the sand. Not really, of course — anyone who gets in actual fights over riding a wave is an idiot who takes surfing far too seriously — but you get the idea. BUT. There are times when dropping in might be acceptable. If we’re talking about real-life situations here, at least, instead of some utopian wonderland where surfers are nice and follow the rules no matter the situation. I’m going to break a few of those situations down for you. But first, here’s what you need to use as your baseline: Don’t burn anyone. Ever. Now that we have that baseline established, here are a handful of times when it might — might — be understandable. Not acceptable, mind you, but understandable.

You’re dropping in on a serial back-paddler. (SBP)

You know this person. They sit on the peak, looking innocently out at the horizon, not making eye contact with anyone else. You’re in position for the next set wave, and you’ve been waiting your turn like a good little surfer. Set wave looms. You adjust your position slightly, focusing on where you need to be. Serial back-paddler is aggressively attempting to reclaim priority position, ignoring your respect for decorum and position at the peak. SBP spins, frantically paddles around you, and lo and behold, they’re closer to the peak. Once? Maybe okay. Twice. Maybe deserving of a dirty look. Three times? Maybe try explaining to them what they’re doing — they might be unaware, somehow, that they’re being an asshole. But four times? Burn that SBP. Burn them hard.

You’re dropping in on a serial too-later. (STL)

You also know this person. Manic paddling, all over the lineup. Back and forth and forth and back and up and down and in and out. Paddling for every wave, consequences be damned. They’re too early, they’re too late, and sometimes — sometimes — they’re in the spot. These people aren’t often experienced surfers, which is a state of being that we should all be able to appreciate, but if you’re spectating, it can be a little painful to watch. The STL will occasionally do that thing where they’re trying to get into position by paddling around the entire lineup, positioning themselves far, far too deep. They drop in, hoot to make the rest of the lineup aware that they are going AGAIN, and then proceed to miss the section and straighten out, thus ruining the wave for everyone else except the person who is able to spin and go at the very last possible moment. Once? Maybe okay. Twice. Maybe deserving of a dirty look. Three times? Maybe try explaining to them what they’re doing — they might be unaware, somehow, that they’re being an asshole. But four times? Burn that STL. Burn them hard.

You’re dropping in on a serial burner. (SB)*

Depending on where you surf, the SB might be a common creature. As I said before, at certain spots, drop-ins are part and parcel of the locale’s identity. At those spots, you would be forgiven if you took a winner-take-all attitude, or better yet, you took a “party waves are fun” attitude. I know, it’s a hard attitude to take, but sometimes you just gotta embrace it. If, however, you’re not at one of those certain spots and you happen to share the lineup with a serial burner, you might be forgiven if you gave the SB a taste of their own medicine. First, of course, let’s return to our checklist: Once? Maybe okay. Twice. Maybe deserving of a dirty look. Three times? Maybe try explaining to them what they’re doing — they might be unaware, somehow, that they’re being an asshole. But four times? Burn that SB. Burn them hard.

* Don’t do this if said SB is likely to try and punch your face. You have a nice face and it doesn’t deserve to be punched. Better to take a deep breath, bury your frustrations deep inside, and either hold onto them bitterly forever – never sleeping soundly again – or, better yet, shrug it off and move on with your life.

You’re dropping in on a friend because it’s hilarious.

If you’re lucky, you surf in a place that has enough good waves for enough days out of the year that you’re not dying for every single wave. And if you’re even luckier, you have friends you can play jokes on without them taking things too seriously. Perhaps you’re at some semi-deserted wave at the end of a three-day swell event, and you’ve both got arms like noodles and enough salt-water in your sinuses to cure a holiday ham. The waves have been pouring in and you’re both in the best state that exists in life: surfed out. The swell is dying, the lineup is empty, and you’re less focused on the fun that accompanies attempting to refine some detail of your surf technique and more focused on the fun that accompanies simply surfing with a friend. Your friend burns you and you both have a good laugh. Maybe it even turned into a party wave. In that case, burn your friend. Burn them hard.