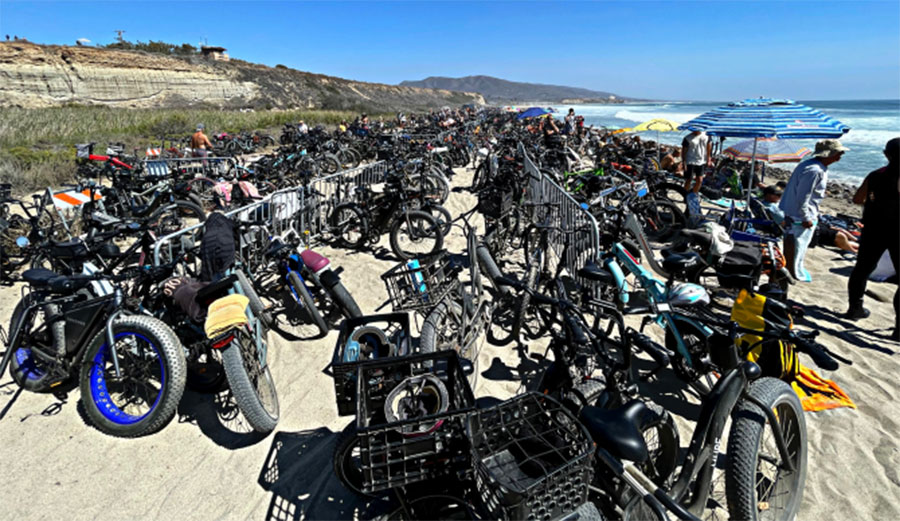 In the last few years, the popularity of e-bikes has exploded. People buzz around silently, cruising up hills with still legs, going about their day-to-day business without breaking a sweat. But nowhere have they exploded in popularity quite like they have in Southern California. Head down to San Onofre State Beach on any given day and you’re almost certain to run into a whole pile of them. Tyler Warren, a hell of a good shaper, a hell of a good surfer, and a hell of a good artist, grew up there, and he’s had enough of it.

“I grew up surfing San Onofre State Beach, enjoying the natural environment with parents and friends and that feeling of retreat, peace and tranquility,” he wrote in a petition to ban e-bikes in California State Parks. “This has been lost with the use of electric bikes in California State Parks. Now when I go to surf Trestles there are kids and adults racing by you at 15-20 mph on electric bikes. ”

Back in the day, you see, most people used their legs to get down to Trestles. They’d ride skateboards or bicycles with no motors or, if you can even believe it, they’d (gasp!) walk. One might think that, since e-bikes aren’t particularly cheap, they wouldn’t be such an issue.

But Southern California, and especially the area around San Onofre, isn’t known for being cheap. There’s a relatively high percentage of people living there who could be considered wealthy, and dropping a few grand on an e-bike isn’t going to break the bank. And Warren, according to his petition at least, thinks that some e-bikers might be a little more prone to being indolent sloths who fling trash off their rides like a paperboy delivering the news in the eighties. I’m paraphrasing, of course.

“When you get to the beach it feels like a parking lot and not a State Beach that we grew up with,” Warren continued. “It brings a feeling of rush to our lineups and land that was so sacred. Also it has allowed many people that would not walk, skateboard or ride a push bike to the waves due to laziness, which means a lot of people leaving trash and disrespecting the prized, open land we have left and want to keep free of over-crowding.”

This isn’t the first time someone’s been upset about the number of e-bikes. Just a few months ago, the City of San Clemente banned them from the beaches and beach trails within city limits. Trestles is technically in San Diego County, so it’s still a free-wheeling free for all. Aside from the overcrowding issues, there is also some concern about the batteries. I suspect that many don’t use e-bikes because they’re trying to be green, but because e-bikes are a lot easier than plain ol’ bikes. The greenest bike is a bike without a battery, after all.

While I’m not quite sure what happens if the petition hits its goal, as of this writing nearly a thousand people had signed it. “The natural view is destroyed with all these bikes. This is especially true during the WSL surfing event,” wrote one of the signees. “It also takes up much of the sitting space on the shore forcing large crowds into a smaller area. Not safe or fun. Many are rentals. It brings a disproportionate amount of people to the location and a negative impact on trails.”