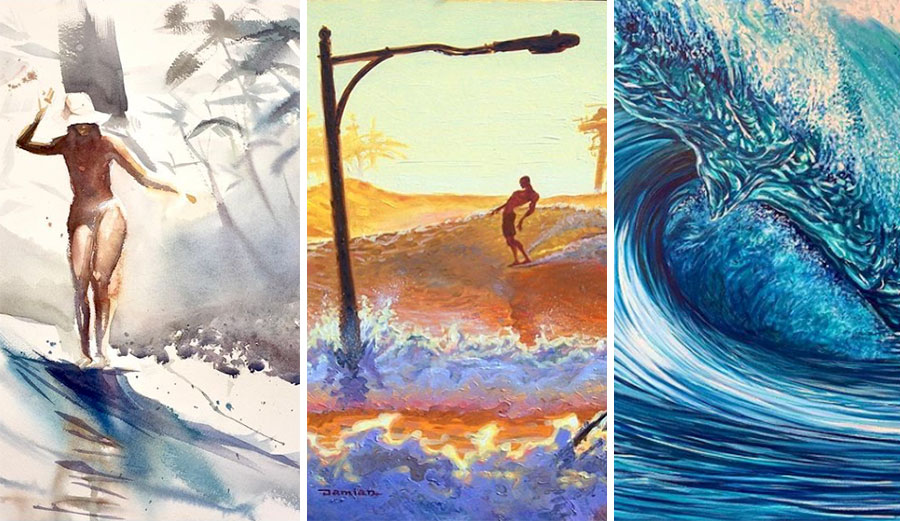 Art is a funny thing, isn’t it? It can be anything one deems as art. It’s simply “the conscious use of skill and creative imagination especially in the production of aesthetic objects.” Pretty vague, isn’t it? A banana duct taped to a wall, for example, is art. Joan Miro’s Pienture, which sold for an eye-watering $2.2 million, is art. Barnett Newman’s White Fire — $3.8 mil — is art. I’m sure someone out there looks at Le Chien or White Fire or a banana duct taped to a wall and genuinely appreciates them… but I don’t get it. Perhaps I’m a lowly, uneducated pleb, but I’m more partial to photos and paintings that give me something I can relate to on some level. Surf artists make art that I can relate to.

A long time ago, in a different life, I had a photograph hanging on the wall in front of my desk. It was a sunset shot of a longboarder at San Onofre, I think; the sky behind him a dusky orange turning to that ever-so-faint violet that signals the beginning of twilight. He was in silhouette, his arms held out at right angles from his body, his feet mid-cross step. Bryce Johnson is the name of the photographer — a supremely nice human being I met during a funny summer a million years ago at SURFER magazine (RIP) — and I spent many hours leaning back in a creaking, busted leather chair, staring at that photo and wishing I had more words to write down.

That photo on my wall doesn’t exist anymore, but I can close my eyes and picture it any time I want. My mum is an artist, and a pretty good one if I do say so myself, so I have a handful of her paintings strewn about our walls. It’s simple, really: pretty pictures bring enjoyment when they’re hanging on walls. I don’t know why that is, but something in that complicated lump of meat between our ears likes images that are pleasing to the eye. There are three particular artists that routinely create things that really, really resonate with me — full disclosure here, I consider two of them to be friends, but they became friends because their art resonated with me — and with any luck, their work will resonate with you, too. 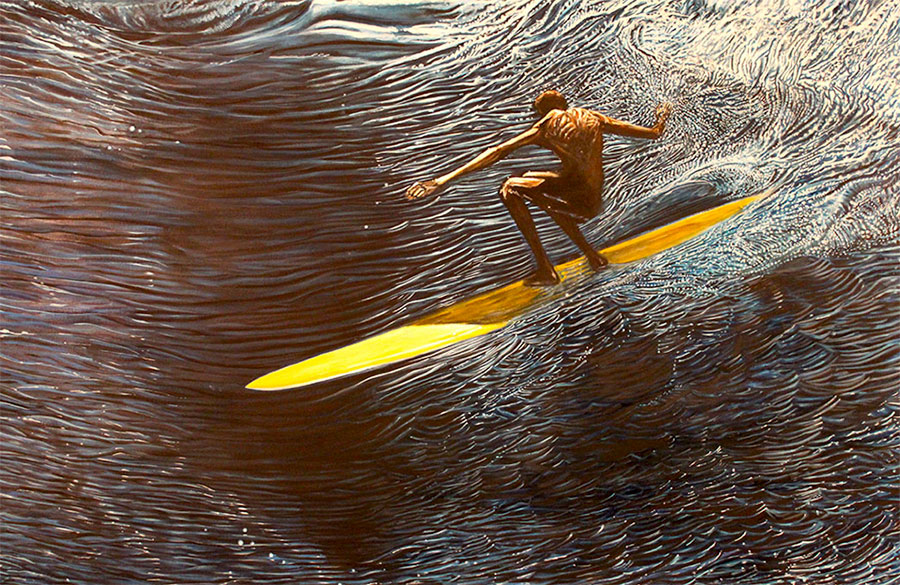 You likely know Joshua’s last name. He’s the baby of the Paskowitz family, son of Doc Paskowitz. He was in The Flys, a band known best for the song “Got You Where I Want You.” He’s an extraordinarily nice man, and he is an artist, through and through. I visited him once in his little studio in San Clemente, a few months after a wonderful sit-down interview with Doc. Paint was flecked through his beard and hair. Vast numbers of paintings leaned against walls, propped on the floor, against chairs, on a desk. Big and small— there were a lot of paintings. He has a particular style. Lots of paint. Strong colors and lots of texture, darks against lights. Most of his work has something to do with what’s closest to him. “I just want to reflect the passion and intensity of surfing, our family, and the ocean,” he told me. My whole life revolved around it. And it always will.” 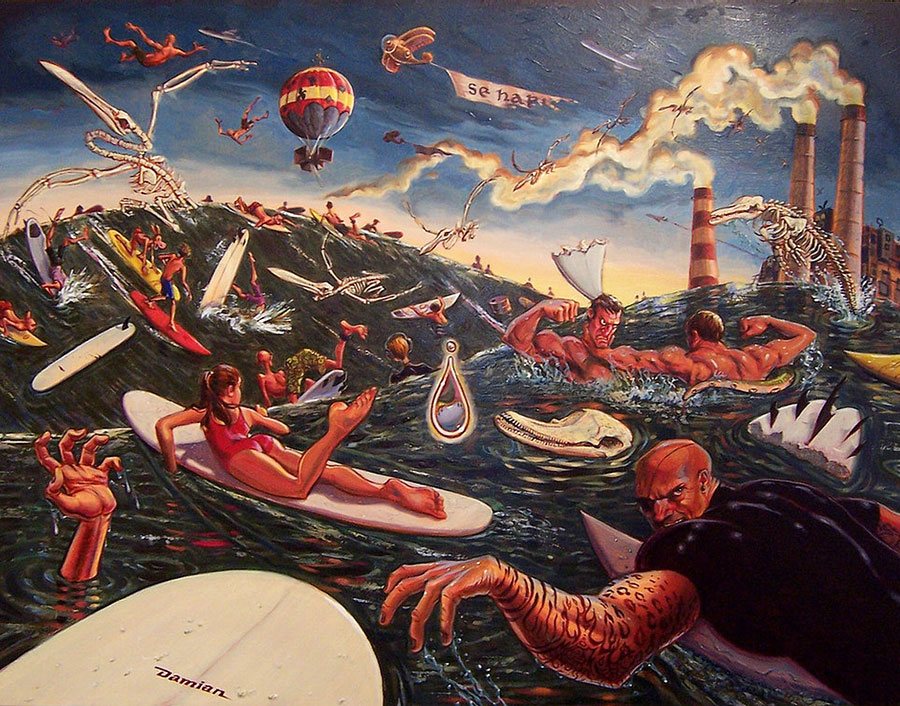 Damian Fulton’s work is stunning. I’ve seen it described as “pop-surrealistic,” and although I don’t know enough about art to really understand what that means, it sounds fitting. Much of it feels dystopian, in a way — I asked him, in fact, to illustrate a short story of mine called This Is the Dystopian Future of Surf — huge, monstrous men on motorcycles, comic book-worthy women in bikinis, broken buildings, nuclear waste, zombies, and surfboards. Lots and lots of surfboards.

It’s packed with color, packed with little things in the background that make you want to stare at every inch of every painting until you’ve uncovered some little secret.  “For me,” Fulton said, “it’s the pursuit of getting better, in the application of paint, finding the ultimate subject matter narrative, or discovering a medium I haven’t done before.”

Fulton has been in and around the art world for much of his life. Way back in the day, he created a few characters that are near and dear to my heart. Radical Rick is the most prominent, but there are others. He launched his career as a cartoonist and illustrator with comic strips like The Shred Brothers and Radical Rick, and his body of work is enormous. 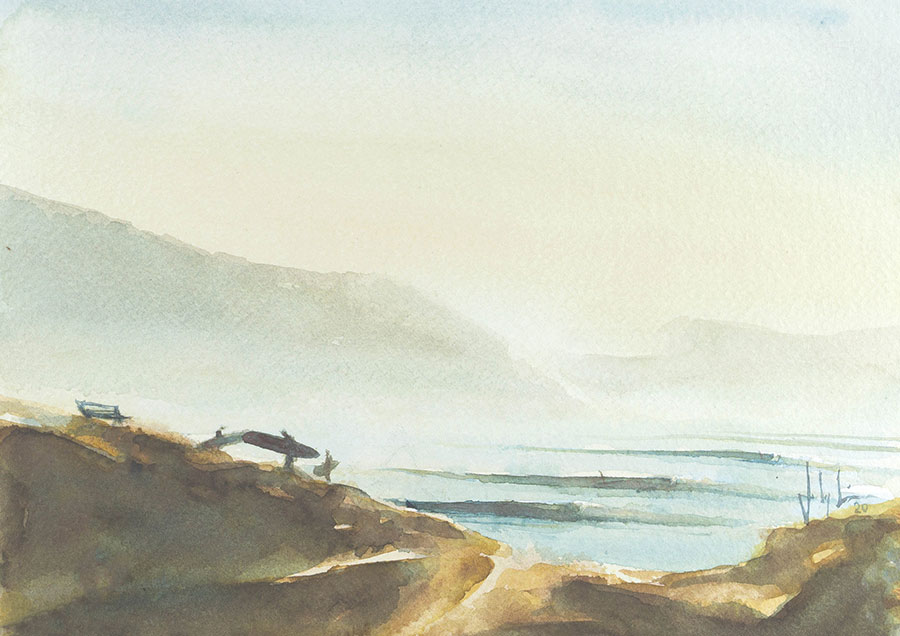 Johny Vieira’s work is something I stumbled across on Instagram a few years ago. I liked it so much that we ended up running a story about what he does — it’s more than just painting — and since then, I’ve been watching in awe as he produces more and more work that makes me feel a certain way. That, certainly, is what art is for: to evoke a feeling. Any feeling. Vieira’s work makes me feel like I’m looking at a painting of something I dreamed about, but can’t quite place my finger on.

He’s a Portuguese artist who began creating art for a simple reason: he kind of had to. There were these things in his head that needed to get out, and in order to let them out, he needed to figure out how to make them real. In the beginning, it was sculptures, but as time went on, he threw himself more and more into painting. “The inspiration for making this is my passion for surfing,” he said. “Surfing has such an important impact on us that I can’t imagine creating anything else. It’s kind of a tribute for all that I have received from the ocean.”

He uses watercolors, mostly (and funnily enough, his paintings remind me of a period of time where my mum did, too), which adds, for me at least, to a sort of dream-like quality. I swear, I’ve seen his work in real life — the images he creates are so reminiscent of places I’ve been, places I’ve imagined, or places I want to go. I look at some of them and wonder if he’s painting what’s inside my head. And that’s a good measure of an artist, I think. That’s something I can relate to.