Defending Lower Trestles: Despite the WSL Finals Vitriol, It’s One of the World’s Best Surf Spots 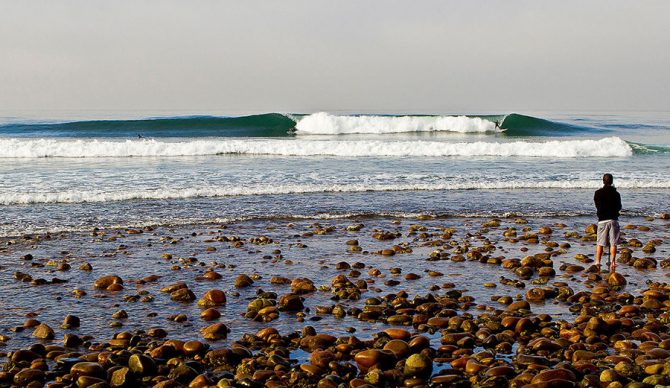 In the wake of the World Surf League’s world title showdown last week came predictable howls of derision, with righteous outrage from pundits and competition surf fans alike leveled at a variety of offenses, ranging from the widely-panned “winner take all” format that graced Stephanie Gilmore with an eighth world title to men’s title winner Filipe Toledo’s aversion to big, heavy waves (some even suggested that both their crowns be awarded with an asterisk attached). Not to mention the customary complaints regarding the ongoing, and inexplicably unchecked, inanity of the WSL’s commentary team. This is all fair and good, with vitriol, however misguided and ill-informed, being the hallmark of fandom in any organized sport. What I did find surprising, however, as well as misguided and ill-formed, was the amount of criticism pointed at the event’s venue: Lower Trestles.

In virtually every aspect of reportage, pundits piled on Lowers as if the wave itself was the root of all this evil, almost uniformly describing the break as decidedly sub-par, hardly worthy of our attention, with liberal use of dismissive adjectives like “soft,” “flat-faced,” “mediocre,” and even “shit.” One earnest young reporter went so far as to assert, with the confidence of one who’s been covering the pro tour for almost five years, that, “…it’s hard to argue that Trestles is the measure of what world tour surfing should be.” As opposed to specialty breaks like Pipeline, I guess, where a 50-something surfer can still trounce today’s young stars, or Teahupo’o, where a bald, 43-year-old, former mid-range pro did the same.

Take it from me, a surfer with both the authority and years of experience to make the following claim: they’re all wrong. Because the fact is that by any reasonable standard, Lower Trestles is one of the world’s best waves.

First, a bit of history. The wave known as Lower Trestles, while always considered the prime attraction in Southern Orange County’s San Mateo Creek surf break complex, did not always appear in configuration as it does today. First ridden in the early 1950s, as late as the early 1980s the wave at Lowers was, during south swell season, a reliable rolling right slide over evenly spaced cobblestones, with an ancillary mushy peak to the north of the regular takeoff spot that occasionally offered a short left.

All this changed following the epic El Niño event of 1982-83, when a series of powerful winter swells, while not optimally surfable, significantly reconfigured the Lowers bathymetry and subsequent sand flow, not only forming a more focused, symmetrical peak, but steepening the right while building up a fast, bowling left. By 1986, this high-performance hybrid wave was the hottest thing going in Southern California, with locals and international visitors alike making the long, hot trek down to Lowers on anything even resembling a south swell.

The appeal was simple: the newly shaped Lowers proved itself to be the ideal wave on which to ride a thruster, the three-fin design only a few short years in widespread use at the time. Something about the wave’s neutral draw off the bottom, combined with the benevolent angle of the face and curl, accentuated how the thruster’s fin cluster allowed suitably skilled surfers to bank vertically into the lip and redirect with no loss of speed and control, while at the same time accommodating full roundhouse cutbacks in a manner hard to match at other premier California breaks.

The left, not to be outdone, eventually grew more hollow than the right, becoming a veritable photo studio, not only due to its perfect afternoon side-lighting, but because the more acute angle of its bowling face became the ideal medium for lift-off; forget about all those early close-out flyaways, it was here at Lowers that the modern aerial was born. Taking these attributes into consideration, it’s clear why over the past 38 years Lowers has deservedly earned its reputation as the high-performance capital of California surfing. Not Windansea or Rincon or Steamer Lane (although during the late eighties and early nineties, the Point at the Lane would get an honorable mention.) In addition, when judged by the standard of surfing witnessed at numerous professional contests held there over the decades — in fact, compared to any other venue currently hosting a world tour event—Lowers would certainly have to be considered one of the best performance waves in the world.

This fact being established, let’s examine Lower’s appeal to 99.9 percent of all other surfers, most of whom are not sponsored pros, or charge giant Teahupo’o, Pipeline, Kandui or any number of 60-foot barrels and gaping death slabs located around the planet. Meaning, most probably, anyone reading this. Strip away the fiberglass curtain at Lowers and what you’re left with is an eminently predictable, symmetrical peak with a long, peeling right wall and shorter, hollow left, both rippable from two to ten-feet, super consistent during south swell season and breaking in temperate water with morning offshores and regular evening glass-offs. Not to mention its suitability for surfers of every age, gender and skill level. Face it: If an accurate description of the Lowers wave (meaning minus comparisons to Teahupo’o, Pipeline, Kandui or jet-ski assisted, giant Kirra) were to be included in a surf travel company catalog, the nearby resort would be fully booked seven months out of the year. With surfers just like you, who, rather than getting scared out of their wits at maxing Cloudbreak, would no doubt happily pay plenty for a few clean, well-overhead set waves at Lowers.

Okay, back to the “fiberglass curtain” part. Yes, for all the reasons cited above Lowers is insufferably crowded, but that’s not her fault; don’t hate her because she’s beautiful. It’s precisely because Lowers is such a great wave that it’s reached this saturation point. And yes, occasionally the wind does pick up side-shore in the afternoon and if that happens to coincide with a contest final it’s a damn shame. But neither of these circumstances are justifiable reasons to deride the break itself. Keep in mind, Lowers doesn’t owe us anything. But for a reminder of what it does provide, re-watch match one of the women’s event at this year’s world title finale. Honestly now, compared to anything you surf on a regular basis, would you call Lowers a “mediocre” wave?

I didn’t think so.