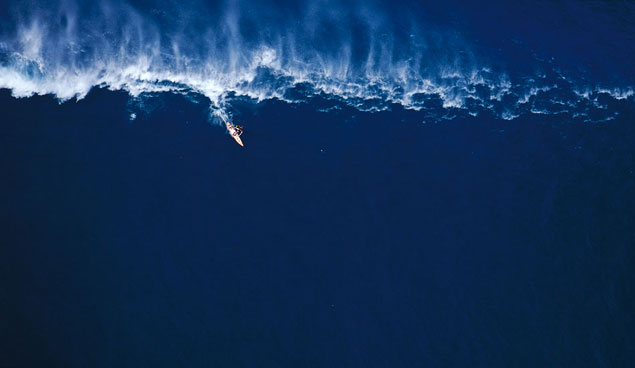 Surfing is constantly evolving. Every year, every month, every week, something changes. Someone tries something that, by its failure or success, alters the direction of the sport. It’s like a road that is constantly under construction, and the builders don’t have a final destination – they’re just building it because they love to the act of making the road, creating little side streets here and there. And, depending on the traffic, those little side streets can turn into major thoroughfares.

Big wave surfing has turned into one of those thoroughfares. Up until a few years ago, it was something of a fringe sport; a part of surfing that was reserved seemingly for either only the insane or the most calculated, and rarely for those in between. Its road wound in different directions, slowly finding its way to where it is now. The tow craze was a part of that road. And while it is nearly non-existent now, except for the occasional un-paddleable days, big wave surfing wouldn’t be where it is today without its influence.

Surfers were pushing their limits before they strapped boards to their feet, but with the ability to match the speed of the wave earlier came the realization that yes, the inevitable wipeouts were survivable. Jay Moriarty’s Iron Cross at Mavericks did much the same thing. Before that, hardened vets backed off, mostly for fear of the unknown. But when they watched a teenager fall on the heaviest day in the heaviest place, then paddle back out with a smile, something clicked. It was survivable, and the floodgates opened. Tow surfing did the same thing, only on an even larger scale. It only takes one to push the limits of many.

And as the size limits are being pushed, so are the limits of almost everything involved: board shapes, mentalities, physical limits, and most importantly, life-saving technology. With the elusive hundred-foot mark constantly just over the horizon, the potential for life-threatening situations is ever increasing. Add to that the GoPro syndrome – the ability to share exploits with a crowd that is cheering for blood and the idea that athletes might be pushed further than they should be because of that cheering – and the recipe is ripe for disaster. And, according to Greg Long, a man that is widely considered to be the best big wave surfer in the world, that is part of the fun.

“The risk is a motivating part of what we do,” he said at a recent screening of Sine Qua Non, a film based on the mentality behind big wave surfing. “But as we’re doing this more often and in bigger waves, safety precautions are elevating right there with the level of performance.” While the same safety precautions may have been looked down on just a few years ago as overly cautious, things are coming around. “A couple of years ago, if you were wearing floatation, people would look at like you like you’re cheating,” continued Greg. “But now you won’t find a single person in the line up that doesn’t have floatation in their suit. I’d say that 75% of the lineups actually have people wearing inflatable wetsuits. It’s come a long way.”

There are, however, a few surfers have been experimenting for years. Men like Garrett McNamara, who currently holds the world record for the biggest wave ever surfed.  “For the past fifteen years,” he wrote in an email, “I’ve been adding floatation from lifejackets into my wetsuits. This has ensured that no matter what, I am coming up, and someone will be able to find me in an extreme situation.”

But has the increase in safety devices enabled surfers who wouldn’t otherwise have the ability or confidence to enter big wave lineups?

“Some guys are just pulling it every wave,” said Gary Linden, founder of the Big Wave World Tour from Mexico.  “As soon as they wipeout, they pull it. That’s the thing: I don’t want to depend on my equipment, I want to depend on me.”

Maya Gabeira‘s recent Nazaré debacle was one of the most hotly debated examples of technology’s ability to put people with questionable ability into precarious situations. Although there are some in line ups that probably shouldn’t be there, the best share Linden’s sentiments. Training and experience goes further than technology, and it shows. The best in the world haven’t gotten to where they are without taking their fair share of beatings, and in a sport like big wave surfing, the confidence necessary to push yourself to the limit only comes from a unwavering faith in yourself. Greg Long’s wipeout at Cortes Bank in December of 2012 was a reminder of the power of that faith. During the course of a four-wave hold down, his inflatable wetsuit failed. He held his breath until he blacked out, refusing to let himself inhale water, and was subsequently able to recover quickly because of it. “I think that we’ve pushed the level of the sport, size-wise, to a place where we’re at the edge of our limits,” he said, remembering that day at Cortes. “You can try and go bigger – there may be that moment when you’re feeling great on that particular day and someone does – but when you’re out there and it’s fifty, sixty feet, there’s this self-preservation instinct that’s within all of us. Unless you’re really sure of it… you’re not going to sit here and say, ‘I’m going to throw myself over the edge and try this because I’ve got this inflatable wetsuit on.’”

And of course, there will always be the purist’s argument, the one that says by taking measures to protect yourself from harm, you’re taking away from what the sport actually means. There are varying levels of this argument, but it seems that, so far, the most widely accepted use of technological protection is the Jetski. It is rare to see a big wave day without squadrons of skis floating in the channel, watching over any surfer that might get in a situation he or she can’t get themselves out of.  But where is the line?

“I guess there’s the idea then of, when do you eliminate all the risk of what you’re doing?” wonders Greg when asked about the use of spare air. “That will be an argument to the end of time. Does it then become impure? Well, if it’s impure, then why are you using floatation and inflatable wet suits? But I don’t know… that’s what keeps the danger factor.”

The balancing game between total elimination of risk and knowingly putting yourself into too-risky situations will always be one played by individuals, and they will all play it differently. What can be said for sure, however, is that the progression of technology and consequent pushing of the limits (or vice versa) will be an interesting road to follow, because even those building it don’t know where it’s leading.