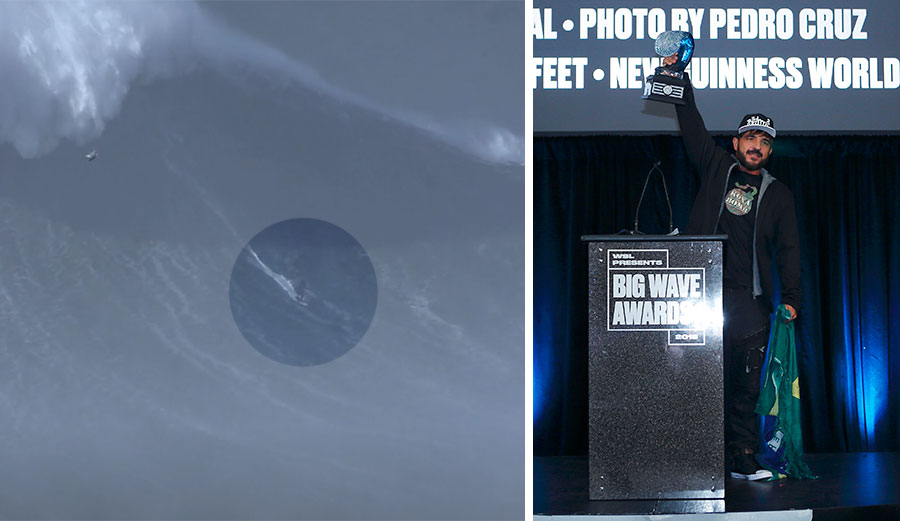 On Saturday night, the world’s best big wave surfers gathered in Los Angeles for the 2018 Big Wave Awards. The usual suspects were in attendance, and for the most part, the winners were shoe-ins. Ian Walsh walked off with the Ride of the Year Award for that Jaws wave, Andrew Cotton got Wipeout of the Year for breaking his back, Paige Alms won the Women’s Overall Performance because she’s miles ahead of everyone else, and Lucas Chumbo won the Men’s Overall Performance award because overall, his performance was, as usual, incredible. But something else happened, too. Rodrigo Koxa, the man who won the Quiksilver XXL Biggest Wave Award, also broke the world record for biggest wave ever surfed.

Up until now, Garrett McNamara held the honor with his 78-footer at Nazaré in 2011. Prior to that, it was Mike Parsons’ wave at Cortes Bank in 2008. Of course, there’ve been multiple claims that the record has been broken by both McNamara himself and other surfers, but Koxa’s 80-footer in November of 2017 is the only one that the Guinness Book has confirmed.

“It’s my fifth season here,” Koxa told The Inertia‘s Shannon Quirk via Facebook Live soon after his record-breaking wave. “I love this place. This place changed my life. All my life I give all my best to surf big waves, and in 2014 I got one huge swell here. I actually almost died…And now I got a present from God. It was the best present I’ve ever had.”

Nazaré has well and truly become the place that holds the biggest waves on earth. Back in 2011, after McNamara basically introduced the place to the world, he knew what was coming and said as much in an interview.

“So is the spot gaining popularity? Are there a lot of tow-in guys there right now?” asked Justin Housman. “Not a soul,” Mcnamara answered. ” It’s just really, really raw and powerful and super dangerous. But the boys will be coming.”

Koxa’s new world record didn’t come easy. Surfing the biggest waves in the world means enduring the worst wipeouts in the world, and he’s no stranger to the power of Nazaré. Four years ago, he almost lost his life there. “I try to surf big waves all my life and I had a huge experience in 2014 where I almost died at Nazaré,” Koxa said. “For months later, I had bad dreams, I didn’t travel, I got scared, and my wife helped me psychologically. Now, I’m just so happy and this is the best day of my life. Thank you to WSL, it’s a dream come true.”