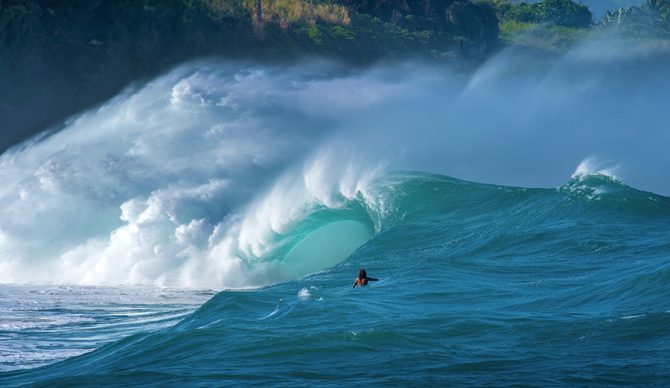 It doesn’t necessarily get any easier to tell the height of a wave from the water. Photo: Brent Storm//Unsplash

Editor’s Note: Welcome to Surf History 101, where we look at innovations in the world of surfing and beyond that changed the pursuit forever. In this edition, Sam George examines the history of measuring waves and how it’s shaped the pursuit.

The decades-long custom of ignoring actual wave height, choosing instead to declaratively assert an estimate – the assigned figure having been reached in a completely arbitrary manner.

During the recent Margaret River Pro, held at that venerable Western Australian reef break, a classic example of estimating wave height was on display, the result, no doubt, very confusing to those surf fans new to the game. Early rounds were held in heavy, blustery, Indian Ocean swells that two-time world champion Gabriel Medina from Brazil called the biggest he’d ever surfed in world tour competition — big Pipeline, Cloudbreak and Teahupoo included. World tour rookie Seth Moniz from Hawaii called it five feet. Now, taking for granted that neither of these world-class surfers is particularly faint hearted, you can imagine how difficult it would be explaining to a newcomer how one surfer could estimate the wave heights at 15 to 18 feet — maybe even bigger on cleanup sets — and the other claim the waves to be a modest five feet. Suffice it to say that virtually all surfers can agree that uncrowded waves are best, yet none, it seems, can agree on how to measure the height of those waves.

Hawaiian surfers of old used many different terms to describe the height of waves. In Hawaiian Surfing: Traditions From the Past historian John R.K. Clark lists numerous descriptive words, including nalu nunue, meaning “big”, ki’eki’ e, meaning “high,” and a’le’ ale ‘ino, meaning “storm surf,” but never a mention of increments. The surf was either nalu nunue or ole (flat), our Polynesian predecessors seeing no need to exaggerate or downplay swell size. 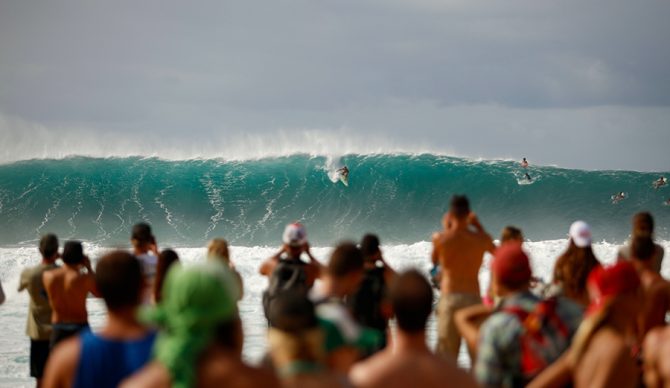 This ethic prevailed into the early twentieth century, as evidenced by a passage in Tom Blake’s Hawaiian Surfriders 1935 describing well-documented 20-foot surf at Waikiki’s Kalahuewehe, or “Castles” reef break. Later generations scoffed at this estimate, finding the idea of 20-foot surf at Waikiki laughable. Nevertheless, this writer can only say that once, while scratching for the horizon during a pumping south swell set at Castles, he witnessed an 18-foot, four-man canoe, manned by Outrigger Club paddlers, suspended vertically on the wave face as it dropped into the wave of the day, with plenty of green water above and below.

But do you think any of those hellmen bragged about surfing an 18-foot wave that day? Their grandfathers would have. But this crew? Not a chance. And not for the reason you think. For this discrepancy we most probably have two California brothers to thank. Walter and Phillip “Flippy” Hoffman were some of the first West Coasters to really apply themselves to Hawaiian surfing in the late 1940s and fifties. Walter, the first to migrate, focused more on well-known breaks like Waikiki and Makaha, while Flippy ensconced himself on the remote, much wilder North Shore, the first Mainland surfer to do so, often riding the heavies at Sunset Beach alone.

Surf lore has it that, sibling rivalry being what it is, when Flippy could convince Walter to tear himself away from the more benevolent south and west side surf, he would challenge his brother to assign a wave height on a particularly gnarly day at Sunset, then mercilessly mock him when he did, dismissively cutting Walter’s estimate in half. That’s right: the current (and popular) “Hawaiian Scale” of downgrading wave height by half was started by a Californian, obviously a good deal more egotistical than any local Island surfer, who, if asked, would probably have just said, “Eh, ‘dose wave plenny big, bruddah.’”

But over the years all sorts of weird units of measure followed in Flippy Hoffman’s wake, including the ridiculous “measure it from the back” (which, if accurate, would mean that 2012’s notorious “Code Red” swell at Teahupoo was a whopping three feet) and all the various anatomical comparisons, including “waist-to-chest high” (on who? Laird? Carissa?), and “overhead” (again, whose head? Owen Wright’s? Cruz Dinofa’s?) Anything, apparently, but simply measuring the wave face in increments of feet from crest to trough, the rule of thumb definitively laid out in renowned oceanographer Dr. Willard Bascom’s seminal 1964 academic tome, Waves and Beaches. Yeah, thanks, Flippy. 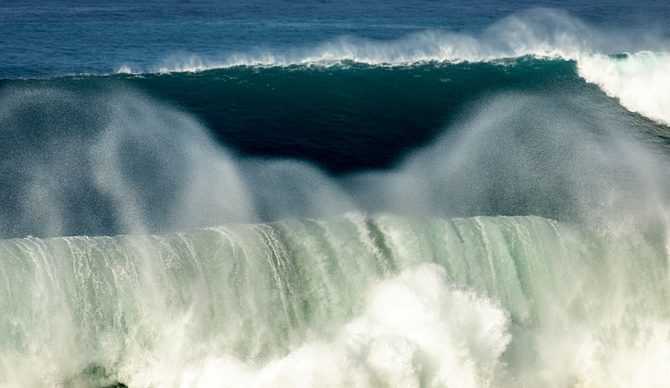 At a certain size, you no longer care how big they are. Photo: Cesar Couto//Unsplash

What It’s Meant To Surfing

There was brief period in the early 2000s when the wave height issue might have been settled. No surprise that money had something to do with it, when in 1998 former magazine editor-turned-big-wave impresario Bill Sharp introduced the K2 XXL Big Wave Challenge, which offered a cash prize to the surfer who rode the biggest wave of the year, to the tune of $1000 a foot.

During subsequent seasons you can bet that big wave riders started asking their friends, photogs and XXL judges to start measuring wave heights accurately. SURFER Magazine even ran a graphic scale in feet on a cover shot of Noah Johnson at Mavericks to indicate the wave’s true height, claiming that from that point forward, waves would be described thus in print.

Those days didn’t last long, however, with most surfers, surf magazines and later surf websites eventually slipping back into the custom of measuring waves any way but accurately. Why? Two words: peer pressure. No, let’s go with a more definitive term: “scaredy cat” (noun, informal, “a timid person”). The only logical explanation as to why a surfer would inaccurately estimate a wave’s height — and it’s always down, never up — is because they don’t want anyone to think they’re scaredy cats. It might seem trivial, laughable, even, but the truth is that denigrating wave height because you don’t want to be called a scaredy cat negatively affects a large percentage of the surfing population by establishing an unreasonable tone of expectation.

When a website, for example, runs photos or videos of exceptional surfers riding exceptional waves with 10-to 12-foot faces, but then so that nobody calls them scaredy cats calls it head-high, what message does that send to the average surfer? That the waves they ride on a daily basis are minus-six foot? That the waves they ride are insignificant? That they are insignificant? What a terrible way to surf through life.

When was the last time you heard any professional big-wave rider freely and without reservations admit that they rode a 50-plus- foot wave? That’s right — even they’re afraid of being called scaredy cats. So where does that leave the rest of us? Riding four-foot waves that tower over our heads, that’s where.