Watch: Footage Emerges of Kelly Slater Rescuing a Mother and Infant Son from a Freak Wave on the North Shore 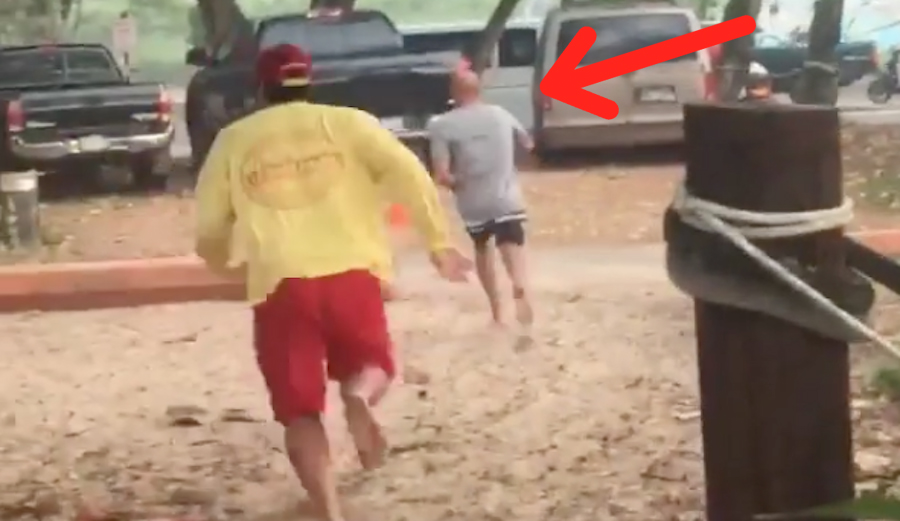 That’s Kelly sprinting like a madman to help save Sarah White and her son Van. Still: @freddybooth

Any average human would need a month-long hibernation period after the past few days on the North Shore. But not Kelly Slater. Like a spartan on stimulants (more likely lots and lots of chia seeds), Slater got denied trying to surf maxed out Waimea, won the Volcom Pipe Pro, and saved a mother and her infant son from a freak wave.

And it hasn’t even been a full calendar week.

In classic Kelly form, he was extremely humble about saving Sarah White and her son Van. He brushed it off like it wasn’t a big deal. But footage has surfaced that shows Slater sprinting, no galloping like a goddamn gazelle, to the rescue. It’s pretty intense.

If your Internet browser doesn’t show the video below, you can view it on Insta here.

Kelly Slater doesn't just win contests he also doesn't hesitate to spring into action when help is needed. This is footage from the other day just after @chris.whitey's wife and son were washed off the road by a huge wave surge. That's @kellyslater taking off in front of Lifeguard Kala'i Ahuna in the beginning. As he runs around that's Lifeguard @angelman76 jumping into the ditch, and Lifeguard @bduhay running around on the left. When you're in danger or hurt there's nothing more comforting than knowing someone is there to help, and when you're helping someone there's nothing better than knowing you have other people helping and backing each other up. Thanks to everyone that helped that day including @kellyslater and congratulations on your win today 👊🏽 Video by @spunjah_brad

The footage is from photographer Freddy Booth, but it originally comes from a private account belonging to @spunjah_brad. It’s from Rockpiles, where Kelly was checking the waves after his unsuccessful Waimea session, when Sarah and Van were swept away by the rogue wave.

We spoke with Sarah, who broke down the harrowing incident.

“I called out for help and Kelly Slater and the lifeguards came to help,” Sarah said. “I was worried that another wave was coming and I just wanted to get my son above water. I think Kelly was the first one to come. He got the pram upright. Once it was over and calm, he gave us a lift home.”

Everyone already knew this, but this past (almost) week proves it; Kelly is superhuman. A mechanically-engineered Übermensch. Cue the conspiracy theories – my money’s on him hailing from planet Krypton.