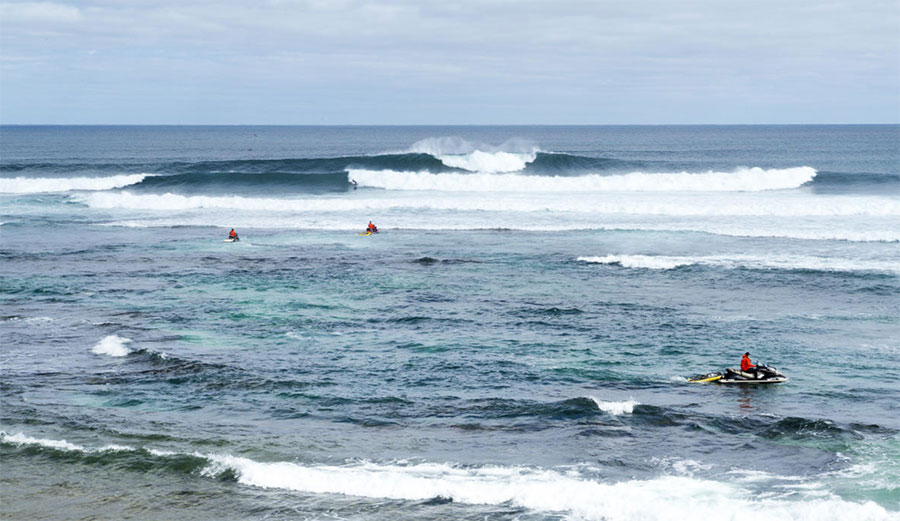 After a pair of shark attacks in nearby Gracetown, the Margaret River Pro has been cancelled. Image WSL

By now, of course, you have heard about the shark attacks around the bend from Margaret River. First, Alejandro Travaglini, an Argentinian, was mauled. Then, just a few hours later, Jason Longgrass had his leg opened up. The Margaret River Pro was put on hold, called on, then called off again. Now it’s been cancelled altogether.

“Today, the WSL has made the difficult decision to cancel the remainder of the Margaret River Pro, as a result of exceptional circumstances surrounding this season’s event regarding sharks and the safety of our surfers,” wrote WSL CEO Sophie Goldschmidt in a press release. “This decision has been reached after many hours of consultation with a variety of stakeholders and experts.”

The attacks in question both occurred on April 16th in Gracetown, just ten miles down the coast from the event. Along with an annual salmon run that already attracts sharks, there are dead whales in the vicinity.  “The presence of beached whales in the area has attracted sharks and contributed to the aggression of their behavior, which, experts agree, has increased the possibility of further attacks,” Goldschmidt explained. “These findings have resulted in nearby locations being closed to surfing and swimming.”

The decision comes after a few competitors voiced their concerns with running a surfing event in between dead whales and shark attacks. “Today they had two shark attacks on a beach close to where we’re competing,” wrote Gabriel Medina on Instagram. “I do not feel safe training and competing in this kind of place. Any time anything can happen to one of us. Hope not. Leaving my opinion before it’s too late!”

It is an intelligent decision. The risk of a shark attack, no matter how slight, should not outweigh the race for World Title points. Hell, just days before the event, John John and Nathan Florence exited the water, put up a drone, and found two sharks cruising the area where they were just surfing. And despite the fact that shark attacks are statistically unlikely to happen, there are times when those statistics change—like during a salmon run in Western Australia, for example. “I think they made a smart decision cancelling the event with all the aggressive activity recently with the sharks,” Tatiana Weston-Webb told The Inertia. “I think right now it’s really more risk than normal. I’m used to surfing sharky zones, so for me, anything would have been fine, but it’s great to see that the WSL is really putting our safety as a top priority.”

Weston-Webb’s sentiments were echoed by the CEO. “The WSL puts the highest premium on safety,” Goldschmidt continued. “This cannot be just talk, and it cannot be compromised. Surfing is a sport that carries various forms of risk, and is unique in that wild animals inhabit our performance environment. Sharks are an occasional reality of WSL competitions, and of surfing in general. Everyone associated with our sport knows that. There have been incidents in the past — and it’s possible that there will be incidents in the future — which did not (and will not) result in the cancellation of an event. However, current circumstances are very unusual and troubling, and we have decided that the elevated risk during this season’s Margaret River Pro has crossed the threshold for what is acceptable.”

Of course, one would be remiss to leave Mick Fanning’s attack at J-Bay out of the conversation. It was an extremely close call—albeit one that put pro surfing squarely in the sights of the mainstream—but the risk of actually losing a surfer to a shark attack mid-competition is a gamble the WSL is not prepared to take. Although they do have safety protocols in place, it appears that sometimes all the precautions in the world cannot give the necessary assurances. “We are committed to being as prepared as possible for what nature throws at us,” the WSL’s press release read. “The WSL maintains strong and constantly-improving safety, monitoring and support infrastructure and protocols, and we would normally have a high degree of confidence in our ability to protect our athletes. However, the threshold has been crossed for the organization and if we decided to continue the event under the current circumstances, and something terrible were to take place, we would never forgive ourselves.”

So what happens now, from a world title race perspective? Well, the competitive structure does have a system in place for events like this, but the World Surf League is exploring other options first. “Our competitive structure allows for points distribution in the event of a cancellation,” the League said. “However, we are not giving up yet on somehow completing both men’s and women’s competition this year, and will communicate our thoughts on that when we know more.”