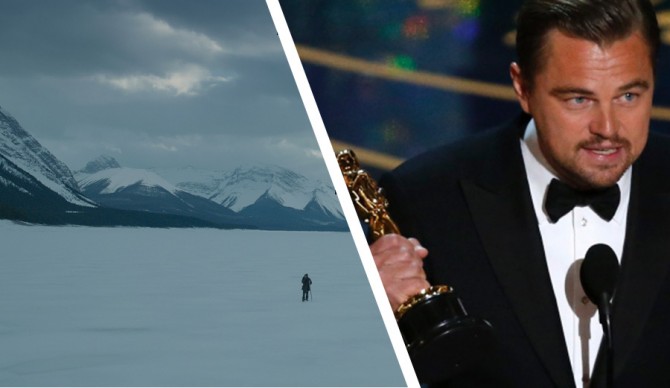 On television alone there were an estimated 34 million people watching. It took 60 seconds for the world to thumb out 440,000 tweets about it. Needless to say, there were more than a few eyeballs watching Leonardo DiCaprio accept his Academy Award for Best Actor after several instances of falling just short.

“I just want to say this — making “The Revenant” was about man’s relationship to the natural world, a world that we collectively felt in 2015 as the hottest year in recorded history,” he said.

“Our production needed to move to the southern tip of this planet just to be able to find snow. Climate change is real, it is happening right now. It is the most urgent threat facing our entire species, and we need to work collectively together, and stop procrastinating.

We need to support leaders around the world who do not speak for the big polluters or the big corporations. But who speak for all of humanity, for the indigenous people of the world. For the millions and millions of underprivileged people who will be most affected by this. For our children’s children. And for those people out there who’s voices have been drowned out by the politics of greed.

We often listen most intently when it comes to the cinematic world and the artists that make it all tick. So if any moment was going to light a fire under the world’s ass and spark change, this was as good as it gets.

Some of the facts are undeniable. The average global temperature in 2015 was 1.62 degree Fahrenheit warmer than the 20th century average. Scientists have outlined our “carbon budget,” telling us how much carbon dioxide can be emitted into the atmosphere if we are to keep that number below two degrees (1,000 billion tons, to be exact). We have parameters to work within, the next step is to follow that outline.

But moving a production to the southernmost reaches of the world to find snow? Because of climate change? Maybe not so much. The phenomenon DiCaprio most famously referred to in his months of lobbying has been Chinook winds, melting and evaporating snow in the dry wind that’s common where much of The Revenant was filmed in Alberta, Canada. In 1962 a Chinook was responsible for a 74 degree (Fahrenheit) temperature rise here over the span of an hour – enough to make me think the world is immediately coming to an end too. So, as it turns out, Chinooks were largely responsible for The Revenant‘s search for snow.

And for that reason a chunk of those 440,000 tweets in the hour following Leonardo DiCaprio (finally) winning his first Oscar were devoted to debunking, or at least calling out Leo’s embellishment of the experience. Chinooks are a natural (and crazy) occurrence. Apparently if you’re Canadian they’re not really that crazy.

But so what? DiCaprio’s taken his heat over the last couple months for this side of the story, and he still stood up in front of the world on Oscar Sunday to deliver the same message.

And that message captivated. Because everybody loves a good story. In fact, part of telling a good story in Hollywood means embellishing something here, giving dramatic flare there, and giving it a shiny package for people to look at. If movies and television shows portrayed life exactly as is nobody would watch them to begin with. It’s the same phenomenon that dictates how and what you choose to share on social media, opting for the most exciting moments over the mundane. The best go out of their way to make things a little shinier from time to time.

I’m not saying the likes of the Surfrider Foundation and Save the Waves should run out and fabricate studies in order to lobby support. As a community of outdoor enthusiasts, in love with the ocean or tethered to a life in the mountains, we’re naturally inclined to care for the environments we enjoy. We’re a group ripe for conversations about “man’s relationship to the natural world” (at least we’d all like to be).

But how many times have we seen a surfer with an audience of 34 million people stirring that pot?